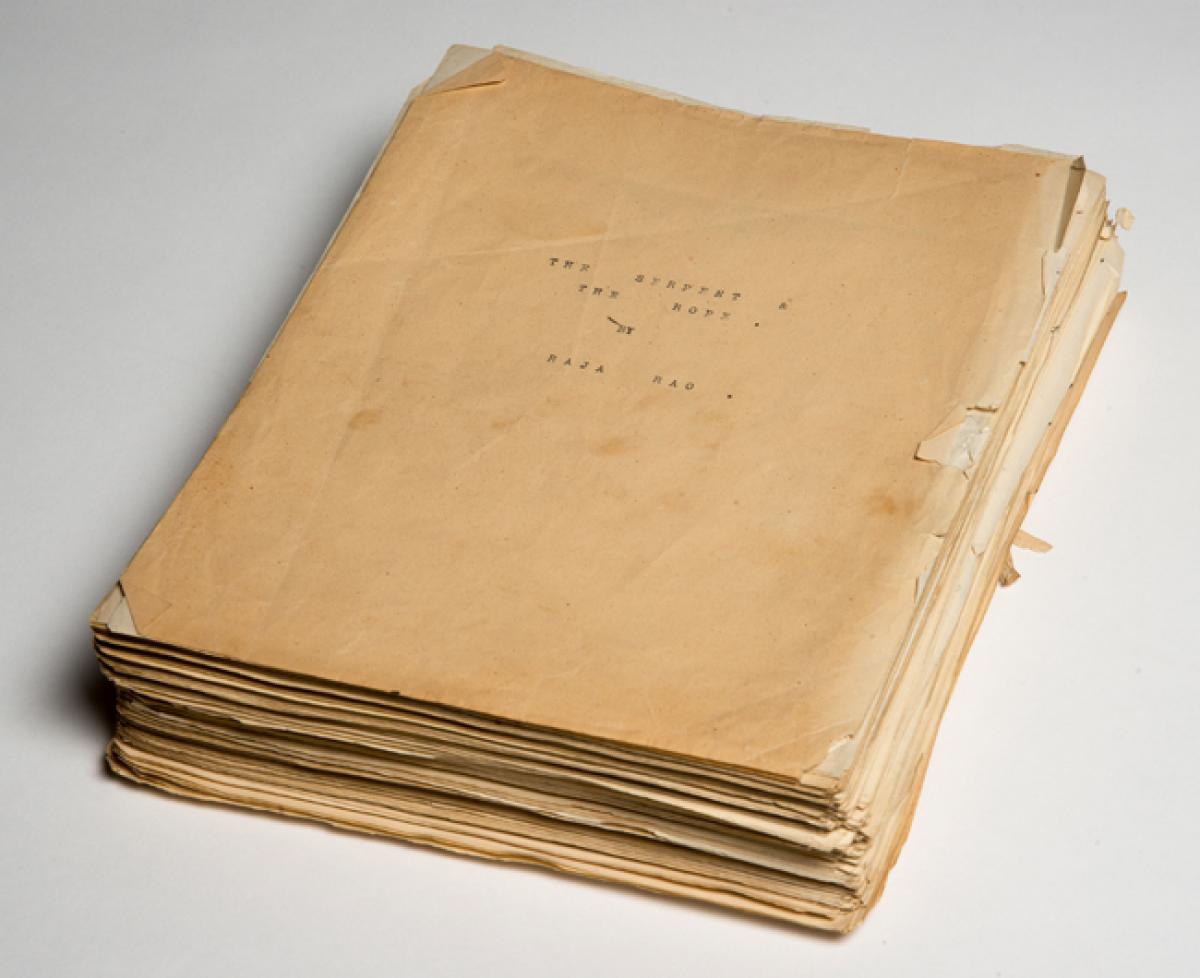 The Harry Ransom Center has acquired the archive of Indian author and philosopher Raja Rao (1908-2006), recipient of the Neustadt International Prize...

​AUSTIN, Texas: The Harry Ransom Center has acquired the archive of Indian author and philosopher Raja Rao (1908-2006), recipient of the Neustadt International Prize for Literature and numerous other literary awards. Rao’s estate donated the archive to the Ransom Center, a humanities research library and museum at The University of Texas at Austin.

Considered one of India’s earliest and most outstanding English-language novelists, Rao was the author of numerous works of fiction, short stories, poetry, talks, essays and “The Great Indian Way: A Life of Mahatma Gandhi” (1998), about Mohandas Gandhi’s time in South Africa.

Rao’s archive includes a broad range of materials, from unpublished works to manuscripts of his well-known novels “Kanthapura” (1938), “The Serpent and the Rope” (1960) and “The Chessmaster and his Moves” (1988).

In 1964, the New York Times Book Review called Rao “perhaps the most brilliant — and certainly the most interesting — writer of modern India.” His novel “Kanthapura,” an account of nonviolent resistance in a southern Indian village, elicited the praise of English novelist E. M. Forster.

“Departing boldly from the European tradition of the novel, Raja Rao has indigenized it in the process of assimilating material from the Indian literary tradition,” said R. Parthasarathy, professor emeritus of English at Skidmore College. “He has put the novel to uses to which it had not perhaps been put before by exploring the metaphysical basis of writing itself, of in fact the word.”

Born in southern India in what was then the kingdom of Mysore, Rao earned his B.A. degree at Madras University. He later pursued postgraduate studies in literature and history at the University of Montpellier and at the Sorbonne. His archive contains materials in several of the languages that Rao spoke including English, French, Sankskrit and his native Kannada.

In 1964, Rao won the Indian National Academy of Letters’ Sahitya Akademi Award for Literature for the philosophical novel “The Serpent and the Rope.” In 1969, he was the recipient of the Padma Bhushan Award, one of India’s highest awards for literature, and in 2007 he was posthumously awarded the Padma Vibhushan by the government of India.

Rao joined the university’s faculty in 1966, teaching Indian philosophy until 1980.

Prior to becoming a professor at UT Austin, Rao gave a series of talks in 1963 called “Saints and the Sage: The Revival of Hindu Philosophy in Contemporary India,” which shared Indian philosophy with America. The archive includes edited transcripts of the talks.

Also included in the archive are Rao’s teaching notes, audio interviews with him, correspondence and materials relating to his interest in studying wisdom and power in relation to governance of nations. Rao studied political leadership in Washington, D.C., in 1972 when he was named a fellow of the Woodrow Wilson International Center for Scholars.

“The Ransom Center is indeed fortunate to acquire the archive of Raja Rao,” said Robert L. Hardgrave, Jr., Temple Professor Emeritus of the Humanities in Government and Asian Studies at The University of Texas at Austin. “Rao lived the last 40 years of his life in Austin as a distinguished writer, philosopher and teacher, and his papers now find a lasting home in Austin at the Ransom Center, where they will be available for study and research.”

Once processed and cataloged, the Rao materials will be accessible in the Ransom Center's reading room to students, researchers and the public.

Get organised and set work rules

Education technology: One of many areas where fairer sex...

Food banks soon to provide meals to patients, shelterless in...