Pulwama: A scribe and a politician first to speak up 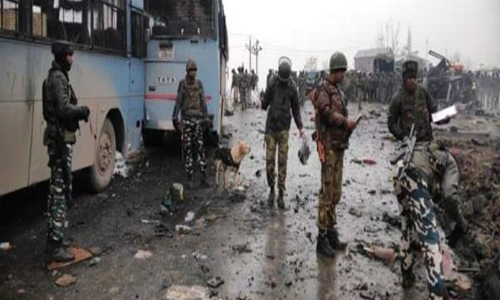 Prem Shankar Jhas column in The Wire caused my mind to wander in an unlikely direction Kanpur riots soon after the demolition of Babari Masjid Jhas...

Prem Shankar Jhas column in The Wire caused my mind to wander in an unlikely direction: Kanpur riots soon after the demolition of Babari Masjid. Jhas piece headlined ‘In Pulwama, Narendra Modi has found the trigger he needed before 2019 elections’ must be read keeping in mind that he was the first to push the barricades.

I shall revert to this, but first Kanpur:Cameraman Kabir Khan, (now a fine film maker) with a keen eye for the story, ended up shooting something refreshingly different from the riots we had originally turned up to cover. In fact, Gopal Gandhi picked the video for special screening at London's Nehru Centre of which he was the director then.The first of the four scenes opens in a small room in which the dominant furniture is a high settee, the size of a bed. The sole occupant of the room is a middle-aged woman in a crumpled, cotton sari.

The neighbours, guiding us, addressed her as Panditayin, one married to a Pundit. The settee, it turns out, is a large size trunk which Panditayin had used to hide her neighbour, one Aayesha Bi, a woman of considerable bulk whom we also met. Rioters carrying rods and lathis barged into the room. They lunged towards the bathroom. “Are you hiding her there?” Panditayin told us she “swore in Rama's name” that she was hiding nobody. Only after they left, showering expletives on “Pakistan”, did Aayesha Bi emerge from the trunk, drenched in sweat.

Scene two has Tripathiji, standing between a threatening mob and a large iron gate opening onto a park where Muslim families had taken shelter. "Musalman ke do sthaan; Pakistan ya Qabrustan". (A Muslim can only go to Pakistan or a graveyard), the mob shouted, brandishing their weapons. But Tripathiji would not budge.Scene three cuts to a terrace full of building material at the corner of a narrow lane leading to a Muslim basti. On the day of the riots, the approaching mob was checked by a hail of bricks from the terrace.

The sole occupant of the terrace, an elderly woman in white sari had launched the missiles single handedly. One of the rioters recognized her.“O' Mishraen, please let us pass.” She did not relent. Mishraen means one married to a "Mishra".Later, when we interviewed her, she was in tears. She spoke in a rural dialect "dui din se roti naheen khai payin, betwa, itni nafrat dekh kar." (I couldn't touch bread, my son, at the sight of so much hatred.)The last scene shows Pandeyji holding back the sword wielding rioters by simply standing in the middle of the lane, arms stretched sideways.

Panditayin, Tripathiji, Mishraen and Pandeyji, among others, must have saved, say, a hundred lives. The moral of the story is quite plain: a great deal of innate decency shines through even in the midst of blinding darkness. When this decency asserts itself, it can turn the tide, as happened in the four instances mentioned above. But it is almost incredible that bloodthirsty mobs would slink back when confronted by one individual of courage? Somewhere here is the sort of leadership which is recognised by a settled social order.

Another point: all the four who stood up to the mobs, happened to be Brahmins. Was this a coincidence? Could individuals from another caste have felt secure enough to stand upto a rioting mob?Against this backdrop, consider Prem Shankar Jha's audacious intervention on the post Pulwama game plan. The tragic death of 40 plus CRPF jawans had caused an eerie silence to descend on all, particularly Muslim enclaves. It was ominous. Telephones kept buzzing. These were more in the nature of signals - signals of anxiety.

Not much conversation took place. Folks were afraid to talk on open phone lines, just in case, in their nervousness, they blurt out something which is not in line with prevailing jingoism.The video footage of candle vigils in and around towns and villages where funeral processions were being taken out, reminded me of "shila pujan", when bricks consecrated in local temples were taken out in procession towards Ayodhya as part of preparation for the Ram temple. This was in 1989. The fierce Hindu-Muslim divide that the "shila" processions created, resulted in the Bhagalpur pogrom, among scores of other, smaller ones. I was there.

Communal violence by itself does not yield electoral advantage, but communalism tied to nationalism can be stretched out until the real, or contrived, denouement, which can, if perfectly timed, create the potential to turn elections. Except for some exceptions, the electronic media has all but declared war on Pakistan. How long will it last? Supposing they raise their dedicated jingoism to the heights of one Geraldo Rivera of Fox News. Remember, when the hunt for Osama bin Laden was at its peak in Afghanistan around November 2001, Rivera whipped out a revolver, taking aim at the camera. "I shall blow his head off should I see him."

Why did I not write on this theme all these days? Well, no journalist worth his salt did. Everybody was in a state of funk. What a sigh of relief all around when Mamata Banerjee took the Prime Minister to task for building an election campaign as the only patriot. "Why did New Delhi not act on the intelligence available to them?" she asked. Rahul Gandhi's soporific response was a mystery. Thank God he woke up.

The truth is that the suffocating silence in the media was first broken by Prem Jha. The tone of my piece betrays a query which I have posed on the pain of being politically incorrect. As in Kanpur did it take a Brahmin to stand up where others were fearful? Is the Brahmin a metaphor for the leader whom societies will always need at critical moments? Of course, this runs headlong into the metaphysical dilemma: the constant quest for egalitarianism.

But in the context of Prem Jha's intervention, Josh Malihadadi's lament seems apt:"Koi awaz pe awaz naheen deta hai"(No one transmits the call, from one peak to the next until the deafening echo pulverizes the enemy.)