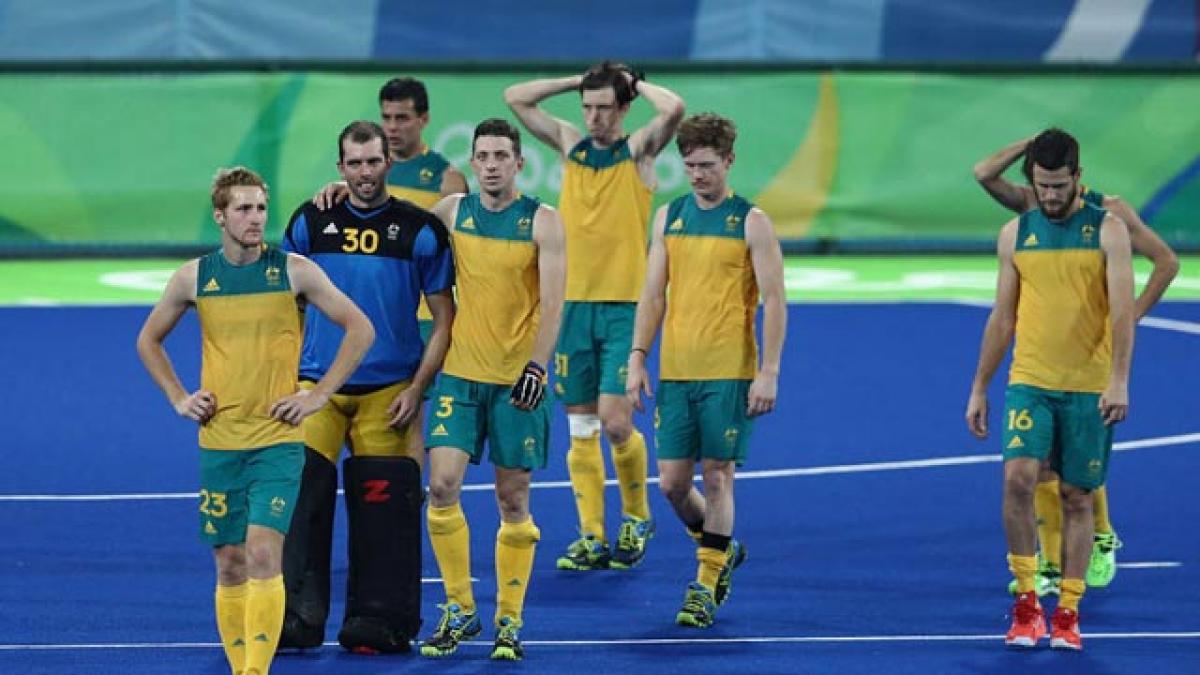 Two-time defending champions Germany scored three goals in the final five minutes to move past New Zealand 3-2, while the Netherlands delivered a stunning performance to oust reigning world champions Australia 4-0 in the men\'s hockey quarter-finals of the Olympics here.

Two-time defending champions Germany scored three goals in the final five minutes to move past New Zealand 3-2, while the Netherlands delivered a stunning performance to oust reigning world champions Australia 4-0 in the men's hockey quarter-finals of the Olympics here.

New Zealand were on Sunday looking on course for an upset victory as Hugo Inglis scored a fine solo goal three minutes into the second quarter before Shea McAleese doubled the New Zealand advantage when he touched home a penalty corner with just eleven minutes of the match remaining.

The last ten minutes were utterly thrilling, with Germany piling on the pressure before eventually going for broke by replacing goalkeeper Nicolas Jacobi with an outfield player with six minutes remaining.

The tactic worked, with team captain Moritz Fürste (56th and 60th minutes) scoring two penalty corner drag-flicks to restore parity before Florian Fuchs netted a brilliant winner with just 1.4 seconds on the clock. In the other quarter-final, the dazzling Dutch opened the scoring in the first minute thanks to a backhand rocket from Billy Bakker, who soon turned provider for Bob de Voogd to make it 2-0 just before half time.

Valentin Verga scored a sublime third just after the break when he volleyed in a pass from the outstanding Jeroen Hertzberger, before penalty corner king Mink van der Weerden completed the rout eleven minutes from time to eliminate the pre-tournament favourites.

In the semi-finals, the Netherlands will take on Belgium, who overpowered eight-time Olympic champions India 3-1, while Germany will face 2014 World Cup bronze medallist Argentina, who beat Spain 2-1.

Germany are bidding to become the first team to clinch a hat-trick of titles after astro turf hockey was introduced in the 1976 Games. They are also the second most successful team in Olympics men's hockey competition.