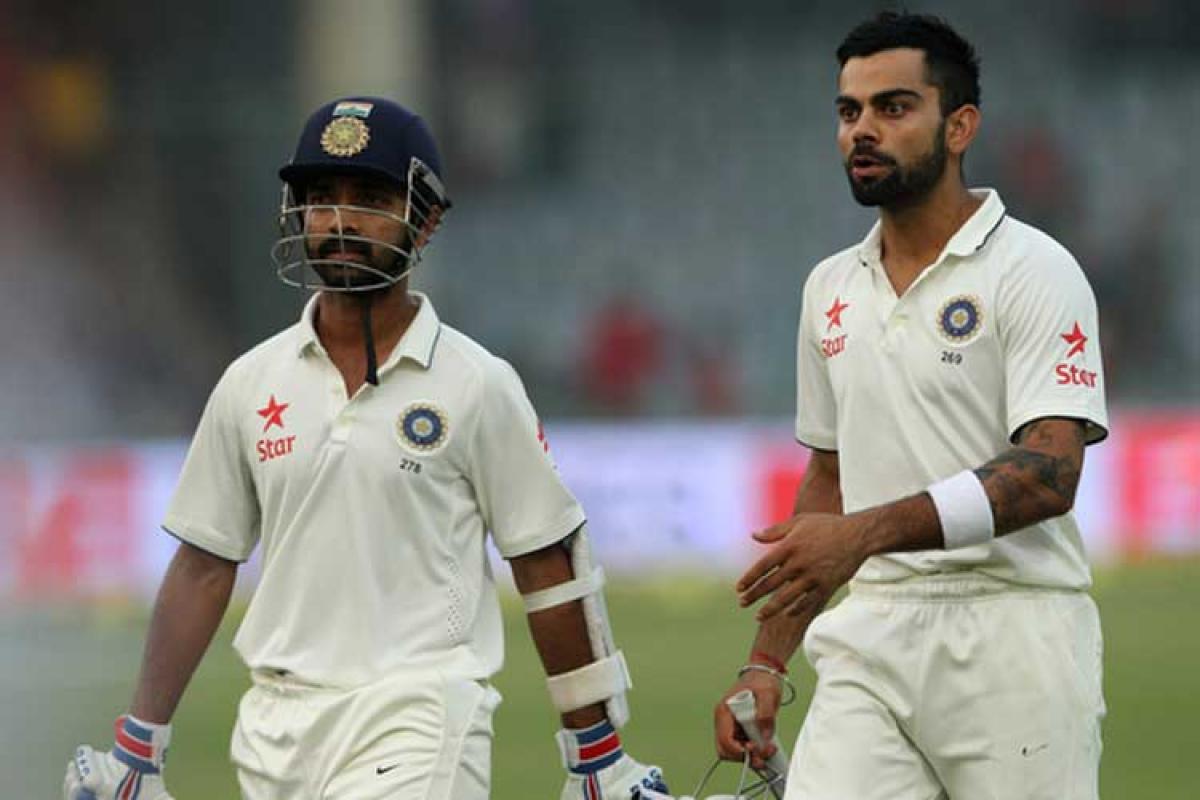 India lost a well-set Cheteshwar Pujara in the post-lunch session and made slow progress to be 148 for three at tea on day one of the third and final Test against New Zealand here.

​Indore: India lost a well-set Cheteshwar Pujara in the post-lunch session and made slow progress to be 148 for three at tea on day one of the third and final Test against New Zealand here.

The home team had progressed from the lunch score of 75 for two, thus adding 73 runs in 30 overs in the post lunch period of play.

At the break, captain Virat Kohli (45), who had struck five fours in his 102-ball unconquered knock, was in sight of his first half ton of the series. With him at the crease was Ajinkya Rahane (19) and the two had added 48 runs for the fourth wicket.

The hosts, already 2-0 up in the rubber, lost openers Murali Vijay (10) and Gautam Gambhir (29) in the session before lunch.

Pujara, who looked assured, departed in the first hour of play after lunch to be the third man out and his 41 was inclusive of six hits to the fence in 108 balls.

His exit, with India on 100, brought together Kohli, who looked subdued barring the occasional aggressive shot, and Rahane and they were together at the crease when tea was called.

The hosts made slow progress in the post tea session and were pegged back by some intelligent bowling on a helpful track by the Kiwi spin duo of Jeetan Patel and Mitchell Santner in overcast conditions.

Both Pujara and Kohli were kept quiet for lengthy spells by the two spinners and Santner also struck a big blow when he sent back the former to nip the third wicket partnership before it assumed bigger proportions.

Assured in his footwork till then, Pujara played slightly inside the line to a ball that was bowled from wide of the crease by Santner and straightened on the batsman to take his off stump.

Kohli, who began in an aggressive manner, also had to be cautious along with Rahane and the team could add just 36 in 15 overs in the first hour of play post lunch.

Earlier, India lost both openers in the pre lunch session after choosing to bat first.

While Murali Vijay fell to off spinner Jeetan Patel in the fifth over, Gautam Gambhir started off well and played some audacious shots before going into a defensive mould and falling to left-arm pace bowler Trent Boult in the 20th over.