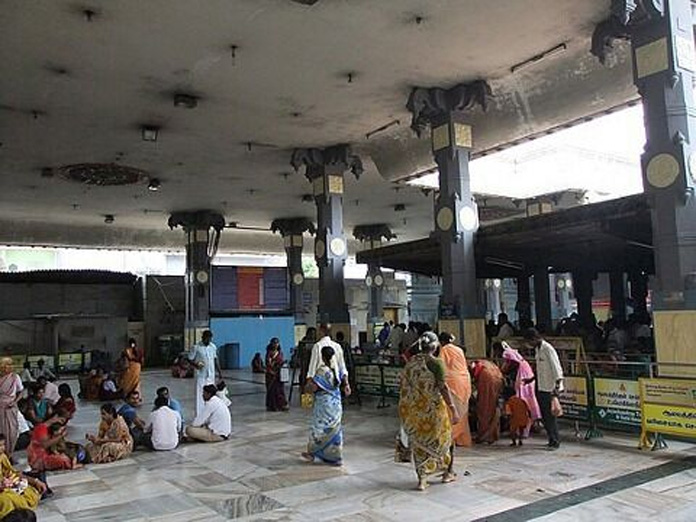 Deriving its name from the many mango trees that once grew here, Mangadu mango grove located in the southwestern neighbourhood of Chennai may have lost its fruit yielding trees but remains a popular destination for devotees of goddess Kamakshi The over 2000yearold temple located in the western part of Chennai sees queues of devotees lining up to perform the Aru Vazhipadu sixweek prayer

Deriving its name from the many mango trees that once grew here, ‘Mangadu’ (mango grove) located in the southwestern neighbourhood of Chennai may have lost its fruit yielding trees but remains a popular destination for devotees of goddess Kamakshi. The over 2000-year-old temple located in the western part of Chennai sees queues of devotees lining up to perform the ‘Aru Vazhipadu’ (six-week prayer), where they offer prayers continuously for six weeks, selecting a particular day of the week on completion of which they believe their wishes will be fulfilled. Visiting the temple on Tuesday, the most preferred day here, I had to wade through a sea of devotees lined up for darshan.

Inside the courtyard, I saw many men and women lighting oil lamps while others sat in groups chanting verses dedicated to Mangadu Kamakshi. The ‘Dukha Nivarini Stotram’ of the goddess known to alleviate suffering is recited regularly inside the temple.

Constructed in the Chola style of architecture, the temple has an elaborate Rajagopuram (main entrance) facing the southern direction while the eastern entrance used by most devotees is lined with shops on either side selling flowers, lemons and other pooja items. The main entrance is seven-tiered with elaborate and exquisite sculptures in each tier and has within it, the sanctum sanctorum housing the idol of the goddess and several other smaller shrines.

To the left of the main entrance is the Ganapathi temple where prayers are offered before devotees join the queue line to the main hall. The idol of goddess Kamakshi and the ‘Ardha Meru Maha Yantra’, a Sri Chakra said to have been installed by Sri Adi Shankaracharya lends the temple its special importance. The yantra which has 43 trikonas or triangles is made up of eight herbs known as ‘ashtagandhis’ and is deemed as a very powerful Raja Yantra (royal). The idol of the goddess behind the chakra with a parrot in one hand a crescent moon in the other decorated with flowers of different hues is a grand sight to behold.

Mangadu is said to be the holy place where Goddess Kamakshi performed severe penance standing on her left leg amidst fire till she received a boon that saw her united with Lord Ekambareshwar in Kanchi. Legend has it that Parvati in a playful mood covered Lord Shiva’s eyes with her hands resulting in eternal darkness for the entire universe.

Ordained to compensate for her action she was born on earth and performed penance before the lord eventually married her at Kancheepuram. Since the penance was performed at this holy site it is known as the Adi Kamakshi sthala and Adi Shankaracharya installed the yantra made of eight herbs to douse the ‘panchagni’ (five kinds of fire) left behind by the goddess who rushed to Kancheepuram without doing so.

We see the special shrine of ‘Tapas Kamakshi’ installed at the instance of Kanchi Paramacharya in commemoration of this legend at the temple. Also seen inside the courtyard are shrines to the sun god and the Saptamthrikas or seven goddesses. At the eastern side stands the tall and imposing temple ‘Dvajastambha’. The temple sculpture depicts the story of the goddess realising her wishes and this perhaps led to devotees believing in her equally miraculous wish-granting power. At a corner of the temple where oil lamps burned brilliantly is a ‘wish seeking’ spot where one can see pieces of cloth, locks and keys, coconuts and other offerings (mudupu) to the goddess. All these and the lemon rind lamps lend a distinct feel to the Mangadu temple which resonates with devotional fervour.

The temple has pilgrims from different parts of Tamil Nadu and neighbouring states. Those visiting Kanchi Kamakshi pay obeisance to Mangadu Devi before beholding her victorious form there. In fact, there is a replica of the goddess of Mangadu within the Kancheepuram temple which I distinctly remember seeing. A visit to this temple with its unique legend, architecture, faith and divinity is a wholesome experience. It leaves devotees with a desire to return one more time perhaps fuelled by the power of penance, the powerful ‘Sri Chakra’ and wish-fulfilment that are synonymous with it.