Telangana to talk to AP on sharing of Godavari 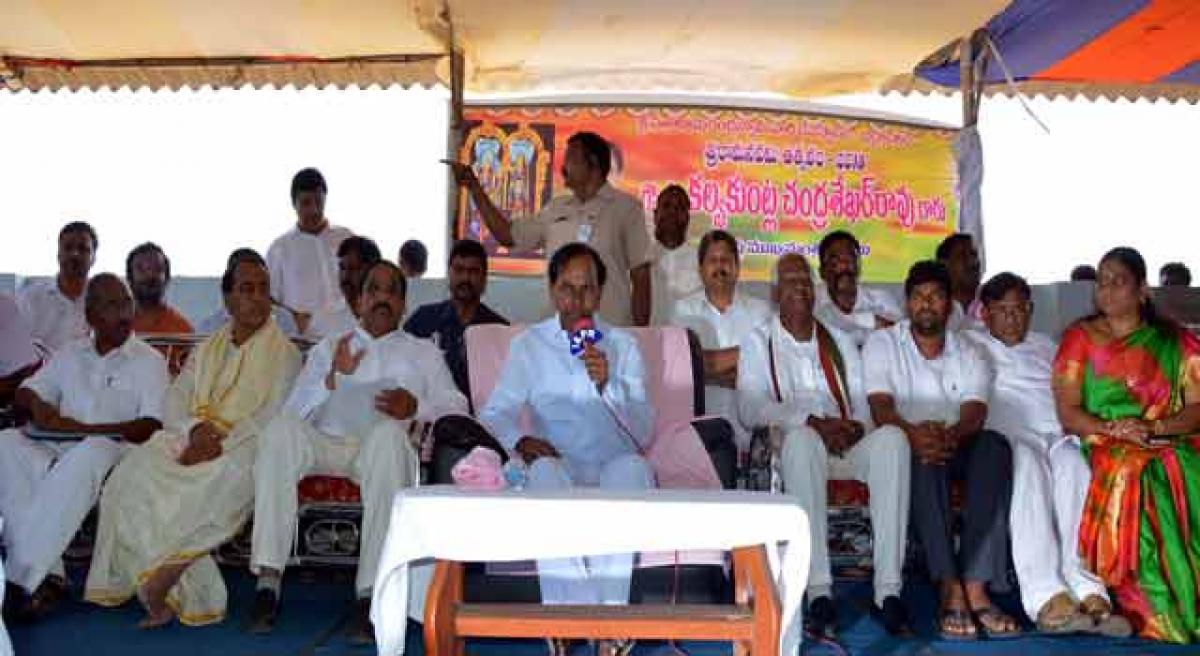 Be it water sharing or other contentious issues tangled up with the Andhra Pradesh government, I will go an extra mile to solve them, so that both the Telugu-speaking people would get benefited with it,” Telangana Chief Minister K Chandrasekhar Rao said.

Bhadrachalam (Khammam): Be it water sharing or other contentious issues tangled up with the Andhra Pradesh government, I will go an extra mile to solve them, so that both the Telugu-speaking people would get benefited with it,” Telangana Chief Minister K Chandrasekhar Rao said.

Addressing a press conference here on Friday after attending the celestial wedding of Lord Rama, KCR emphasised the need for maintaining friendly relationship with neighbouring States.

“Rather than bickering on each issue, there is a need for accommodating each other to get mutual benefit,” he cautioned the AP government, while outstretching all possible help to the neighbouring state.

Recalling his stand on Godavari water sharing, which he made on the Floor of the Assembly recently, KCR said he was ready to cooperate with AP below Dummugudem project.

“It’s of no use for the State once the Godavari water crosses Dummugudem,” he maintained, stating that AP need not have to worry even if Telangana uses 1,000 TMC ft water as it still stands to make use of 1,500 TMC ft.

Responding to a query about bringing back five panchayats that have been transferred to AP after the state bifurcation, he revealed: “AP CM had agreed to solve the issue amicably.”

Referring to development of Bhadradri temple, Rao said that after discussing the modalities with the Chinna Jeeyar Swamy, developmental works will get underway with an outlay of Rs 100 crore.

“This apart, there is a need to put a full stop to ‘podu’ (shifting cultivation) issue that has become a warfare between the government and the Adivasis,” KCR said.

“If needed, the State government will seek the help of the Centre to resolve the issues of ‘podu’ and transformation of Bhadradri into temple town,” the CM said.

He came down heavily on Opposition parties for raising hue and cry over the redesigning of irrigation projects. “Every inch of land will be irrigated in Khammam district,” KCR asserted, referring to the Srirama and Bhakta Ramadasu projects taken up by the government.