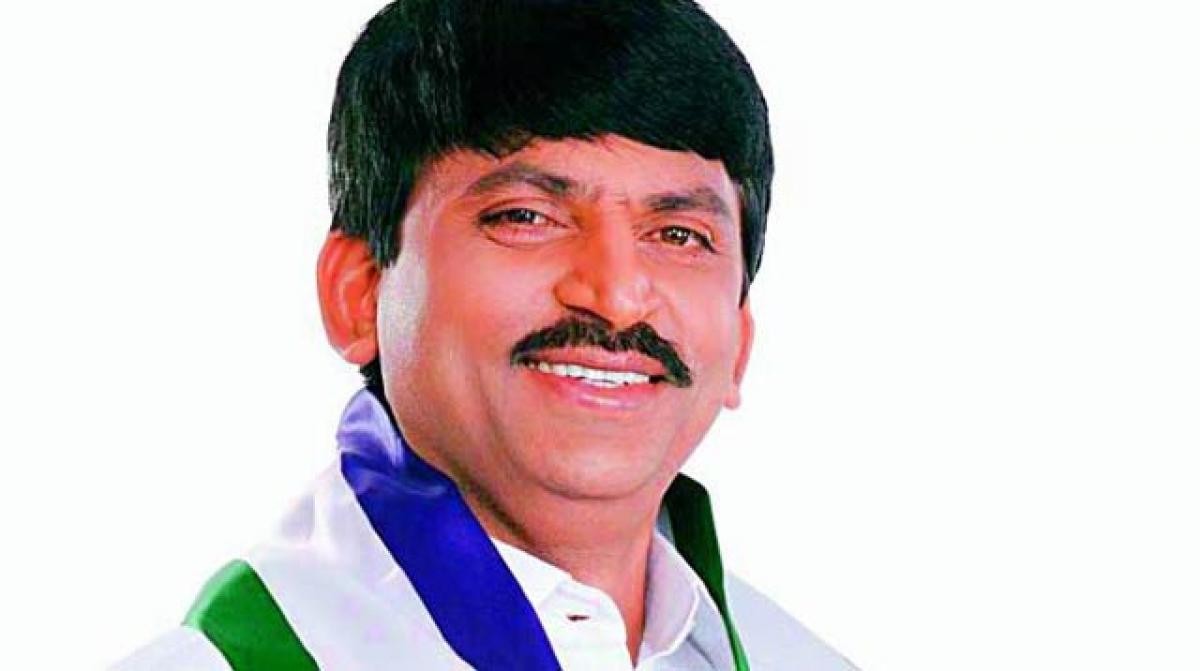 Political circles across the state are agog with speculation that Khammam MP and Telangana state president of the YSR Congress Ponguleti Srinivas Reddy might join the ruling TRS in a couple of days.

Khammam: Political circles across the state are agog with speculation that Khammam MP and Telangana state president of the YSR Congress Ponguleti Srinivas Reddy might join the ruling TRS in a couple of days.

The development comes in the wake of YSR Congress president YS Jaganmohan Reddy’s resolve to sit on a three-day fast in Kurnool from May 16 opposing the construction of Palamur-Ranga Reddy and Dindi irrigation projects on Krishna river.

Albeit the news has been doing rounds for some time, the MP time and again had refuted stating it as baseless. Firstly, the possibility of floor crossing of the MP came to the fore before the Khammam Municipal Corporation elections.

Later, it was reported that the MP had thrown his hat in the ring for the TRS ticket for his brother Prasad Reddy, who is keen to contest from the Palair Assembly bypoll, which fell vacant due to the death of Ramireddy Venkat Reddy. However, his efforts didn’t materialise as the ruling party sprang a surprise by fielding Tummala Nageshwar Rao.

With Jagan set to go on hunger strike in protest against the Telangana projects on Krishna, the MP appears to be caught in a dilemma over continuing in the party as it would suffocate him politically. It’s learnt that the MP had convened an extensive meeting of the district functionaries at the SR Gardens in Khammam on Monday to elicit their opinion.

As he is the mainstay of the party in the state, it’s easily predictable that what the outcome of the meeting. It may be noted here that this is the first time that Jagan has raised his voice against the Telangana projects. It appears that Jagan is trying to corner the TDP-led AP government over Telangana projects on Krishna.

He is likely to sharpen his attack against the TDP by taking anti-Telangana stand before the 2019 polls to protect his interests in AP. This apart, Jagan has also directed his party to support the Congress candidature of Sucharitha Ramreddy for the by-poll of Palair Assembly seat. In this backdrop, apparently the MP is more focused on 2019 elections.

In all probability, Ponguleti Srinivas Reddy may join the TRS in a couple of days, highly placed sources in the TRS told The Hans India. Even before he got elected as the MP in 2014, he is said to be a close associate of Tummala, it’s reported. The recent switchover of Palair constituency in-charge Sadhu Ramesh Reddy to the TRS also indicates that the MP might join the ruling party.

TDP Sathupalli MLA Sandra Venkata Veeraiah said: “The YSR Congress has always helped the TRS indirectly by dividing the vote of the Congress. It was evident in the recent Corporation elections.” With Pinapaka MLA Payam Venkateswarlu is also set to join the TRS along with the MP, the YSRC is left with no people’s representative from the State.