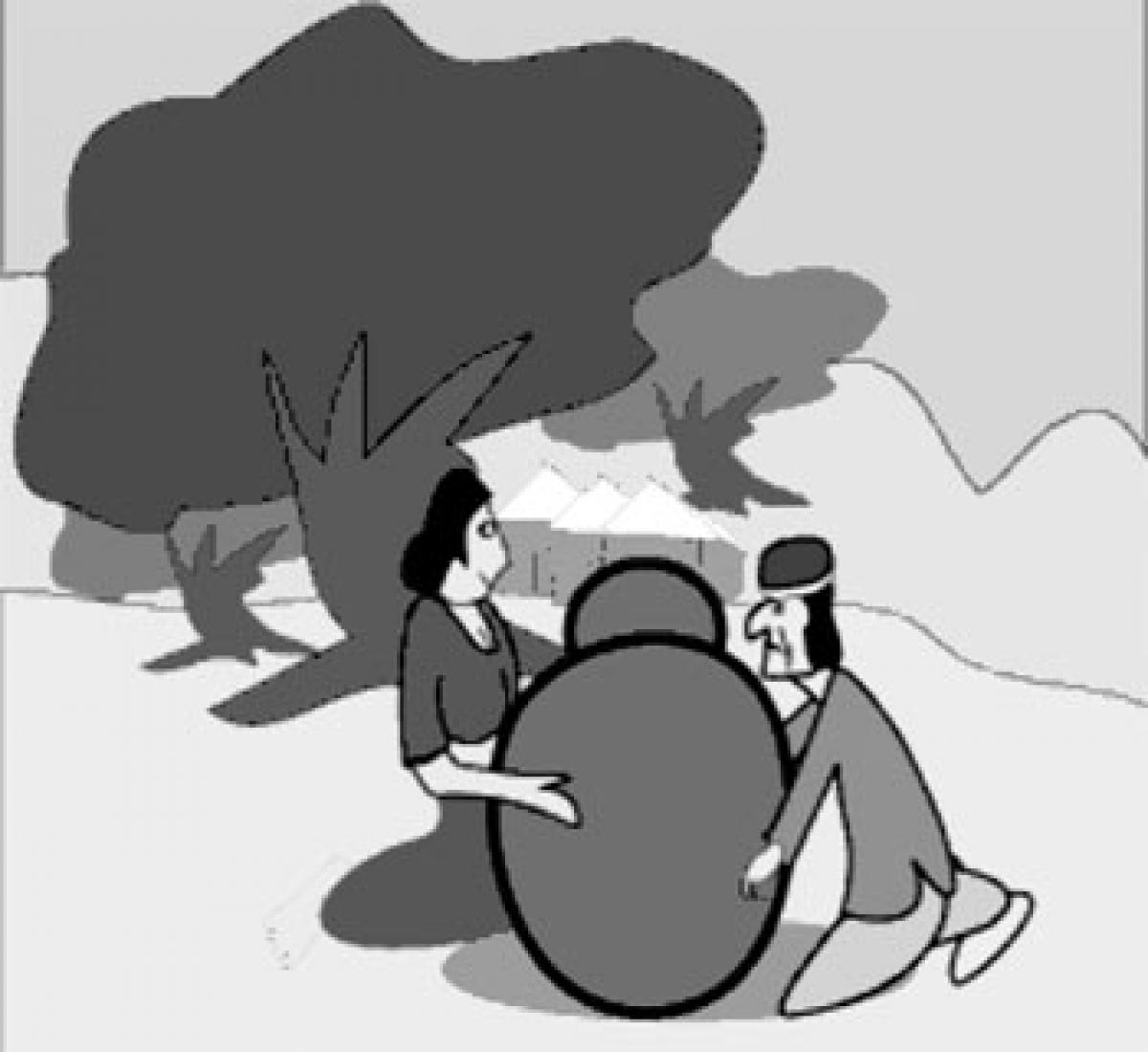 Raju and Savitri lived in Tanjore in the state of Tamil Nadu. Raju worked in the rice fields of a local landlord or zamindar for six months a year. In turn, he received four sacks of rice as salary. He would then sell three of them in the local market and keep one sack for himself for food.

Raju and Savitri lived in Tanjore in the state of Tamil Nadu. Raju worked in the rice fields of a local landlord or zamindar for six months a year. In turn, he received four sacks of rice as salary. He would then sell three of them in the local market and keep one sack for himself for food.

At the local market he would exchange the rice for vegetables, flour, and groceries. Savitri would do the cooking and washing and look after the home. One year there was a severe drought. There was no rain and the rice fields dried up. By April, the two were getting tired of eating nothing but rice. So one day, they decided to go dig for tubers. They took an axe to cut firewood and set off.

Throughout the day Raju cut branches and Savitri searched around for tubers and mushrooms. In the evening they sat under a tree exhausted. Raju put down his axe nearby and leaned his back tiredly against a tree. As he put down the axe, the axe fell through! What he thought was solid ground was in fact a large hole covered up by grass.

He frantically dug up the grass and weeds as his axe was very precious to him. And Lo! What did he find? A large copper vessel was buried in the earth tall enough to hold him. Raju and Savitri dug up the earth until the vessel was uncovered. They lifted it carefully and turned it upside down. Since the vessel was too tall it would have been difficult to remove the axe.

Mud, rocks, dead plants and small rats fell out of the vessel. Anxiously they searched the huge mound of dirt for their axe. Suddenly Raju felt the wooden handle and pulled out an axe. At the same time Savitri also felt a handle and this time pulled out a new and shining axe!

They were stunned. Where did the second one come from? A brand new one? Suddenly they heard a voice calling them by name. It said, “Raju, I am the guardian of this vessel.” Whatever you put inside the vessel will double. But beware! Each time your life will be reduced by two years.”

The two were totally amazed! Never in their lives had something like this happened. Though they realized that they could be rich, they knew that they had to be careful as their lives would be reduced each time they double an item.

They decided to take the vessel home. At home Raju wanted to try out the vessel’s magic. Raju dropped in a bucketful of rice. When they turned the vessel, surprise! surprise! they found two bucketfuls!

Raju jumped in joy and hugged Savitri. “Now we can be rich and happy”, he cried. Savitri, the cleverer of the two, cautioned Raju “let’s not be greedy. Let’s carefully double everything or we won’t live to enjoy the wealth.”

So they went about doubling things. First they took an empty sack and filled it with the two buckets of rice. At the market, Raju sold the rice and his new axe and bought a small gold ring from the goldsmith. He doubled the ring and sold the second ring for a profit. With this money he bought new clothes for himself and Savitri.

Soon Raju was able to build a large house. But Raju and Savitri had already doubled twelve items and their lives were now reduced by 24 years! This meant that had Raju had a life of 80 years earlier he would now only live for 56 years! So Raju and Savitri decided not to use the vessel anymore unless it was really needed.

They buried the vessel in their backyard. Two years passed. One day some people from Chennai came to the village. They had come on a pilgrimage to see the Brihadeeswara temple in Tanjore. This temple was an important holy shrine built by the Chola kings in the eleventh century.

One of the women in the group was wearing a pretty diamond necklace. Savitri, who had gone to the temple, was fascinated by the necklace. Now remember, Savitri and Raju had become rich and respected. Savitri wanted the necklace badly. But could she get it?

Then she remembered the vessel. At once she asked the group home. Over food, she requested the woman to part with the necklace so Savitri could show the design to her jeweler to make a similar design.

The woman was impressed by Savitri and gave it without hesitation. That evening Savitri went to the courtyard where the vessel was buried. She dug it up and threw in the necklace.

Unfortunately in her greed to have the necklace around her neck she forgot the vessel’s magical properties and jumped in to take out the necklace. Immediately there were two Savitris inside the vessel!

The two women started fighting over who would have the necklace. Hearing the noise, Raju rushed out. He leaned over and looked inside and found two identical women inside the vessel. Each looked like his wife but which was the real one?

Raju bent down to help Savitri out of the vessel when one of them cried, “Raju! I am your wife. Help me first!”
The second woman screeched, “No! I am Savitri! Help me first!” Each one pleaded with Raju that she was his real Savitri. Raju was perplexed. He was also annoyed at his wife’s greed. “You foolish woman!” he shouted not knowing which one was his wife, “Look what your greed has done!” Poor Savitri, she was in tears.

“Okay, calm down now and let’s think of a way out”, said Raju. We must also sort out who my real Savitri is.” So he sat down to think. Savitri, inside the vessel also calmed herself down. At once her clever mind came up with an idea.

“Raju” she cried, “why don’t you also jump in? Then there will be two of each. There will be two Rajus and two Savitris. Then everyone will be satisfied.”
Raju hearing it thought it was a wonderful idea and promptly jumped in.