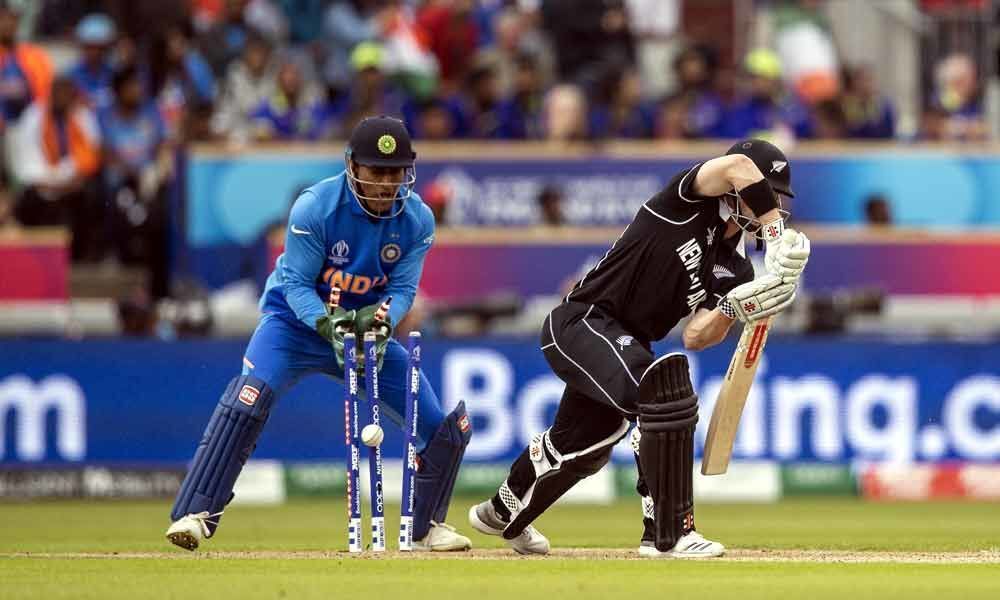 Indian bowlers maintained their stranglehold on the opposition with another splendid performance, restricting New Zealand to a sub-par 211 for five when rain stopped play in the first semi-final of the World Cup here Tuesday.

Manchester: Indian bowlers maintained their stranglehold on the opposition with another splendid performance, restricting New Zealand to a sub-par 211 for five when rain stopped play in the first semi-final of the World Cup here Tuesday.

Despite half-centuries from skipper Kane Williamson (67 off 95 balls) and veteran Ross Taylor (67 no off 85 balls), the Black Caps couldn't force the pace against tournament's best bowling attack as the score at the time of stoppage in the 47th over looked sub-par. After a brilliant start by Jasprit Bumrah (1/25 in 8 overs) and Bhuvneshwar Kumar (1/30 in 8.1 overs), Ravindra Jadeja (1/38 off 10 overs) and Hardik Pandya (1/55 in 10 overs) did well in the middle overs enough to keep the opposition under check.

If the first Powerplay was witness to fine exhibition of swing bowling under overcast conditions, the middle overs had Pandya using the newly-laid two-paced pitch to good effect, bringing the slow bouncer to the fore. That was one delivery that Taylor initially found difficult to get away as the dot ball count increased with each over. Martin Guptill (1) looked like a 'walking wicket' and Bumrah relieved him off his misery with a delivery that kicked up from three quarter length, forcing him to push at it. Kohli at second slip made no mistake with a sharp chance. Williamson looked compact in his defence along with the edgy Henry Nicholls (28 off 51 balls) during their 68-run second wicket stand.

Such was the impact of the first spell bowled by Bumrah and Bhuvneshwar that the Black Caps innings never got the required momentum. But credit should also be given to Jadeja and Hardik for keeping the Kiwis under a tight leash. Jadeja vindicated his skipper's decision with tight wicket-to wicket bowling and the odd one that turned created problems for Nicholls. He had 38 dots to his credit by the time he ended the spell. Williamson, who was getting into some sort of rhythm however couldn't capitalise as Taylor got stuck playing one dot ball after another.

In fact, during the crucial second Powerplay, New Zealand managed only 65 runs in 17 overs as Chahal got decent turn off his leg-breaks. The New Zealand captain, who was hitting a few slog sweeps against the turn was getting impatient having reached 50 off 79 balls. Williamson paid the price by gifting his wicket to the leg-spinner when his team needed him the most. Taylor did up the ante in the final overs with three boundaries and a six but it looks unlikely to be enough.