Don't worry about BJP's return to power: Owaisi to Muslims 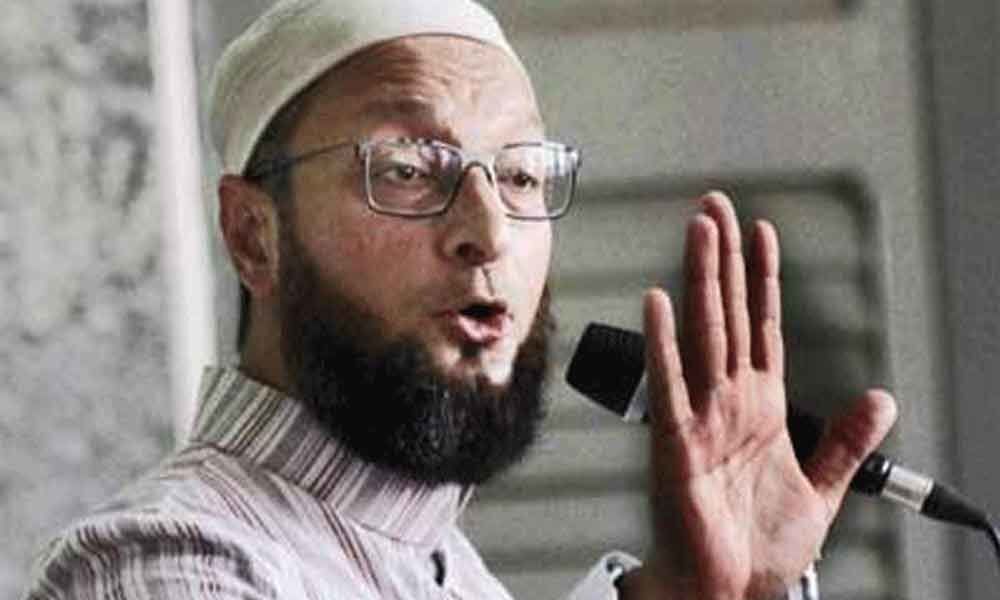 Owaisi also termed the Easter Sunday bombings in Sri Lanka, which killed more than 250 people, as a blot on Islam.

Hyderabad: AIMIM chief Asaduddin Owaisi on Friday said Muslims are free to follow their faith and visit mosques and should not be worried about the BJP's return to power, as the Constitution guarantees freedom of religion to every citizen.

"If Modi can visit a temple we can visit our mosques, if Modi can go sit in a cave, we Muslims can also proudly say our prayers in mosques. Securing more than 300 seats is not a huge thing, Because India has a living Constitution. The 300 seats (of the BJP) cannot take away our rights," said Owaisi.

The AIMIM chief, who was re-elected from Hyderabad for the fourth consecutive term, was addressing a Jalse-e-Youm-ul-Quran on the occasion of Jumat-Ul-Vida (last Friday of Ramzan) at Macca Masjid here on Friday.

The Hyderabad parliamentarian said: "Even in Uttar Pradesh, BJP won, at least public should understand what happened there. If BJP thinks that by winning 300 seats they can rule over India, they are wrong. I promise that Asaduddin Owaisi will fight for India. I appeal to the dalits to also come together."

The BJP won 303 seats in the recently concluded Lok Sabha elections, in which the AIMIM managed to win two Lok Sabha seats.

Owaisi also termed the Easter Sunday bombings in Sri Lanka, which killed more than 250 people, as a blot on Islam. "A Muslim was involved in Sri Lanka attacks, in which so many innocent people, including 40 children were killed. What kind of Islam are they preaching about? The Sri Lanka blast bomber is 'zaalim'. That bomber is a black mark on Islam religion."

He warned parents to save their children from falling prey to drug addiction. "I appeal to all the rich parents to protect their children from using drugs or cocaine. Allah gave wealth but many children aged above 15years, are addicted to cocaine. Whitener was used to correct mistakes but now the children are using it to make mistakes. The younger generation is being destroyed by such drugs," he said.

Addressing the gathering, he spoke about the possible harm video games can cause. "A 16-year-old who was addicted to PUBG, died due to a heart attack in Bhopal. The doctor himself said that the child died because of playing PUBG game. The parents are responsible for his death, they should have stopped the child from getting addicted to the game. In future, if the youth have to be prepared for an emergency, will they fight in video games? Will they fight terrorists with video games?"

Earlier on May 26, the Asaduddin Owaisi had lashed out at the Prime Minister for his "minorities made to live in an illusion of fear" statement and said if Modi really cares about minorities then he should ensure that Muslims are not lynched by cow vigilantes.

The Hyderabad MP who was passing through the road, noticing a huge traffic jam in the locality, got down from his car and started clearing the traffic on the road.

A video of the incident that surfaced online quickly began to trend on social media.