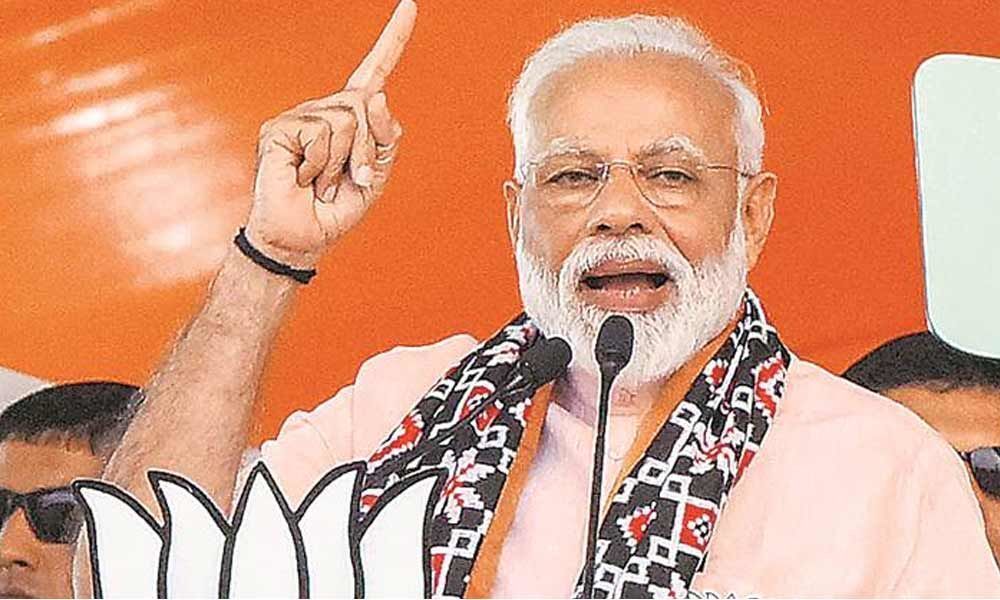 Prime Minister Narendra Modi on Monday hit out at National Conference leader Omar Abdullah over his reported statement seeking a separate Prime Minister for Kashmir, and asked the Congress-led opposition alliance to make their stand clear on his statement.

Hyderabad: Prime Minister Narendra Modi on Monday hit out at National Conference leader Omar Abdullah over his reported statement seeking a separate Prime Minister for Kashmir, and asked the Congress-led opposition alliance to make their stand clear on his statement.

Addressing an election rally here, Modi said there were media reports that Omar Abdullah has stated that there should be a separate Prime Minister for Kashmir.

"Two Prime Ministers for Hindustan? Do you agree with it? Congress has to answer and all the 'Mahagathbandhan' partners have to answer. What are the reasons and how dare he say that", he said.

"I want to ask Bengal Didi who shouts a lot, please answer this to the people of the nation. NC is your friend. There is one U-turn Babu in AP. This U-turn (Chandrababu) Babu, with whom Farooq Abdullah campaigned recently in Andhra Pradesh, should also answer. Do you think Naidu should get votes? I want to ask Sharad Pawar also. You were once the Defence Minister of this country and also Chief Minister of Maharashtra. You want take the country back to 1953? and former Prime Minister H D Deve Gowda, whose son is Karnataka CM, should also answer to the people of Karnataka. Would you like to go with them (Mahagathbandhan) or break away from them?", Modi asked.

On the vexed Kashmir issue against the background of BJP leaders favouring abrogation of Article 370, Abdullah had mentioned about J&K having a separate Prime Minister years ago and whether it needed to be restored to protect the state's identity.

Stressing that the politics of division being followed by opposition parties would impact the country negatively, Modi said as long as he was there at the helm, he would not allow conspiracies to divide the country.

"This kind of division politics negatively impacted the country. Two or three days back, one leader of the National Conference shouted Pakistan zindabad. Congress always tried to strengthen the hands of anti Indian forces. Because of this mentality, these people raise questions on surgical strikes. They insult the bravery of our defence forces," he said as he flayed the party and its allies.

The Prime Minister asked if the people need a country with bomb explosions or with peace.

Appealing to the electorate to vote for the BJP, Modi said the country needs a strong government for it to be peaceful.

He also said "Till Modi is there, you will not succeed in your conspiracies. Modi is standing as a wall between the country's enemies and people of the country....To make a strong country, we need a strong government, and not a helpless one," the Prime Minister said.

Earlier governments used to lament and say there are no funds when the Army sought for bullet-proof jackets and Air Force advanced fighter jets, Modi said.

The Prime Minister said the NC and PDP had opposed imposition of Presidents rule in Jammu and Kashmir.

They had stood up against the Central government and Congress had joined them and said they would not allow conduct of the panchayat elections.

He claimed that the people of Kashmir boycotted those parties by participating in polls with 70-75 per cent voting.

"Whether its Jammu or Kashmir or Ladakh, we are ready to sacrifice our lives for the people, but we will not tolerate these thekedars," he said.

Referring to the Pulwama terror attack in which 40 CRPF personnel were killed, Modi said the country is now not ready to tolerate even one attack and also understood the modus operandi of the terrorists.