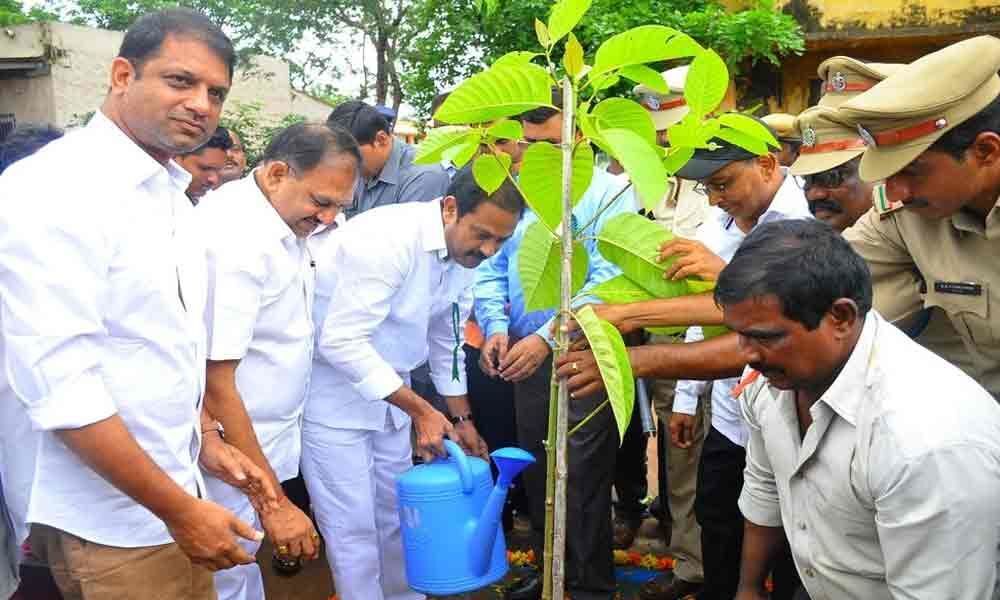 Deputy Chief Minister Alla Nani has said 10 lakh saplings would be planted in West Godavari district during Vanamahotsavam this year.

Bhimadolu: Deputy Chief Minister Alla Nani has said 10 lakh saplings would be planted in West Godavari district during Vanamahotsavam this year. Participating in the 70th Vanamahotsavam celebrations at the Zilla Parishad High School here on Saturday, he urged the people to plant saplings as a social responsibility.

The very existence of human beings is dependent on the greenery as plants give us oxygen by absorbing poisonous gases. Everyone should make it a point to plant saplings during festivals, birthdays, marriages and other functions.

They should also distribute saplings so that the future generations should live in a pleasant atmosphere, he said. He called upon the people to participate extensively in tree plantation and contribute their bit in making the State into Haritandhrapradesh which is the dream of Chief Minister Y S Jagan Mohan Reddy.

Unguturu MLA P Srinivasa Rao said that Jalayagnam, which was part of Navaratnalu was only possible when more and more saplings were planted to achieve ecological balance. Once the greenery is improved, there would be sufficient quantity of rainfall paving the way for Jalayagnam.

Gopalapuram MLA T Venkat Rao expressed concern that air and water were getting polluted and extensive tree plantation was the only way to correct the system. He urged the students to take the lead in planting saplings wherever possible to achieve a pollution-free environment.

The cultural programmes presented by students emphasizing on the importance of environment protection attracted the audience. MP K Sridhar and others were present on the occasion.