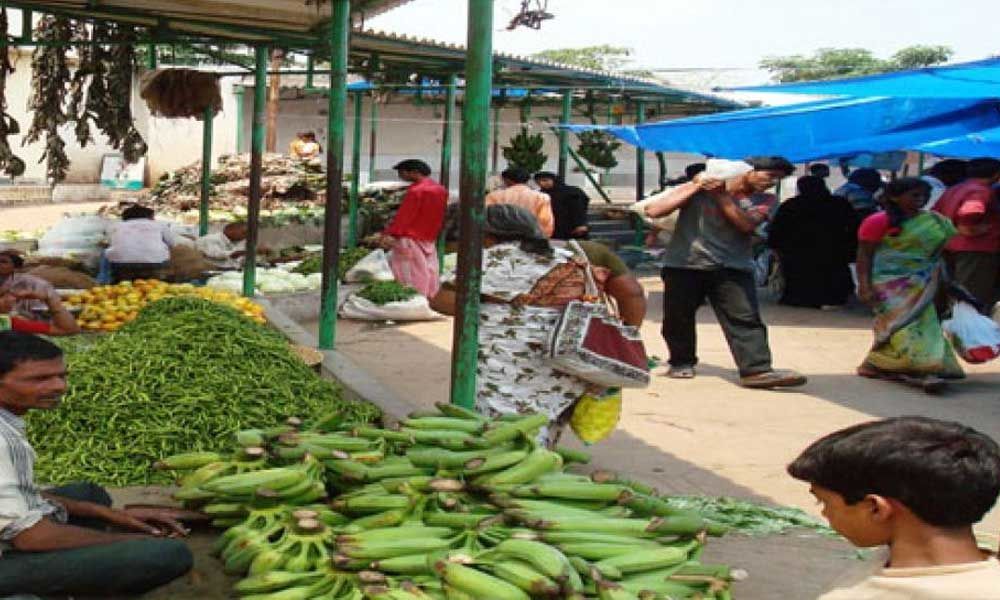 Abnormal hike witnessing in the prices of vegetables hitting hard in the common public. Even upper classes and well to do families feeling pinch of the prices which was not found so for.

Kadapa: Abnormal hike witnessing in the prices of vegetables hitting hard in the common public. Even upper classes and well to do families feeling pinch of the prices which was not found so for.

Except the cost of Brinjal and ladyfingers which are available Rs 30per kg remaining all vegetables crossed Rs 80 per kg in the wholesale and local Rythu Bazar, while they are availing 30to percent excess cost with street venders.

A kg of Beans which stood at Rs15 two weeks ago suddenly skyrocketed to Rs90 in the wholesale market, the locally grown Cluster Beans which available Rs 5 to 10 in the earlier now costs Rs 80 per kg in the wholesale market as they are being sold Rs 140 and 120 respectively in the retail market. The vegetable leaves which are availing 4bunches for Rs 10 in the earlier now cost each Rs 5 witnessed the intensity of the situation

Following spiraling the prices of vegetables the Rythu Bazar appear deserted look with only few numbers of consumers seen purchasing the vegetables. "I have never witnessed such bitter situation in recent period. Even in the strike moments like Seemandra agitation prices of all vegetables remained constant and were available at reasonable rates. I think it is better to adjust with complete day meal with pickles and other cheap variety of curries till the vegetable prices come down" said V.Krishna Murthy school assistant residing in Ys Raja Reddy colony in the city told.

"In the earlier I used to get bag full of vegetables just by spending Rs 50. But now the situation is totally different. It will find hard to have half of the bag of vegetables even spent Rs 300. A six bunches of vegetable leaves any variety availing just Rs 10 in the earlier now each bunch cost Rs 5 in the market. This kind of situation has been witnessing for few weeks." Said C.Rdhakumari Srinagar colony in the city told. it much more hard time non-vegetarians as the mutton price soared to Rs 600 per kg, while the cost of Chicken found Rs 220 per kg, and dozen eggs cost Rs 60.

It is known that as Kadapa district grows only flowery, fruity, vegetable leaves cultures, all most all vegetables are being imported from neighboring districts like Chittor, Kurnool, and Nellore districts.

Market sources said following dry spell conditions across the state during the Rabi season there was no expected vegetable crops grown in the state. They said for example Tomatoes crop is largely grown in Chittor district, but this season it was limited to some areas leads to short supply resulting in the prices of Tomatoes soaring " he said.