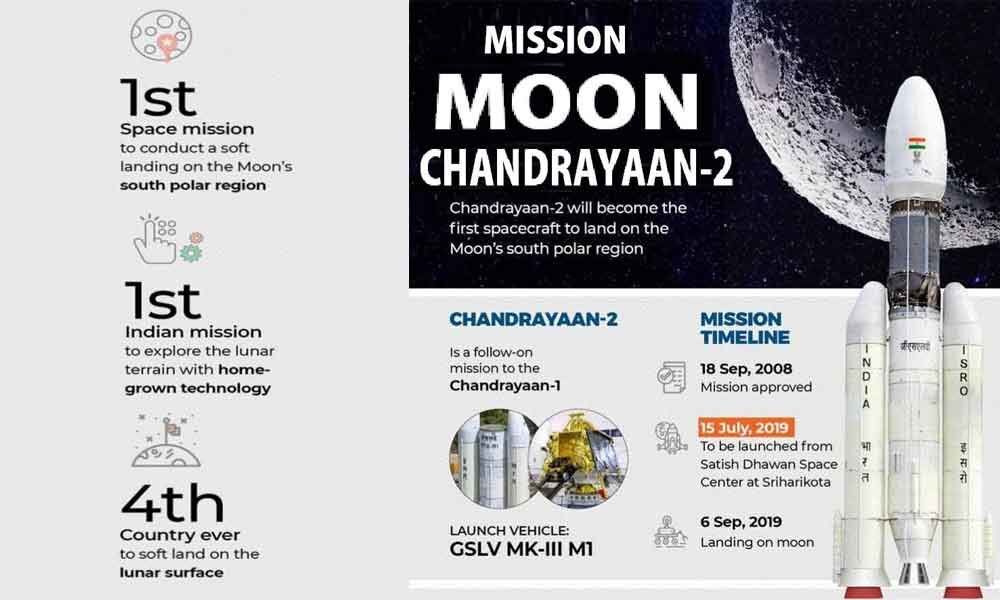 Sriharikota: The countdown for the Chandrayaan-2 mission launch began at 6:43 pm on Sunday. India's second mission to the Moon, Chandrayaan-2, will be launched from ISRO's Satish Dhawan Space Centre in Sriharikota at 2:43 pm on Monday.

Much like last week, during the countdown period, the Chandrayaan-2 mission's rocket and spacecraft's systems will undergo checks and fuelling.

The Geosynchronous Satellite Launch Vehicle-Mk III rocket was originally scheduled for launch at 2:51 am on July 15. However, it was postponed after a technical snag was detected in the launch vehicle an hour before lift-off during the countdown period for the launch.

While similar missions have been carried out in the past by other space agencies such as NASA and Russia's Roscosmos, India's lunar mission is unique as it will attempt to unravel the mysteries of the dark side of the Moon.

The mission, as ISRO explains, will "boldly go where no country has ever gone before -- the Moon's South Polar region" and will follow up on the work of the Chandrayaan-1 -- India's first mission to the Moon -- which had crash-landed near the lunar South Pole, but not before providing proof of the presence of water molecules on the Moon.

The mission will leverage nearly a decade of scientific research and engineering development and is aimed at helping in better understanding the origin and evolution of the Moon by conducting detailed topographical studies, comprehensive mineralogical analyses, and a host of other experiments on the lunar surface.

It will explore the topography of the moon and its composition and will search for water besides conducting in-situ studies.

After being launched from the Satish Dhawan Space Centre on board GSLV Mk III, nicknamed 'Bahubali', the Lander, Vikram, will land near the South Pole of the Moon in September.