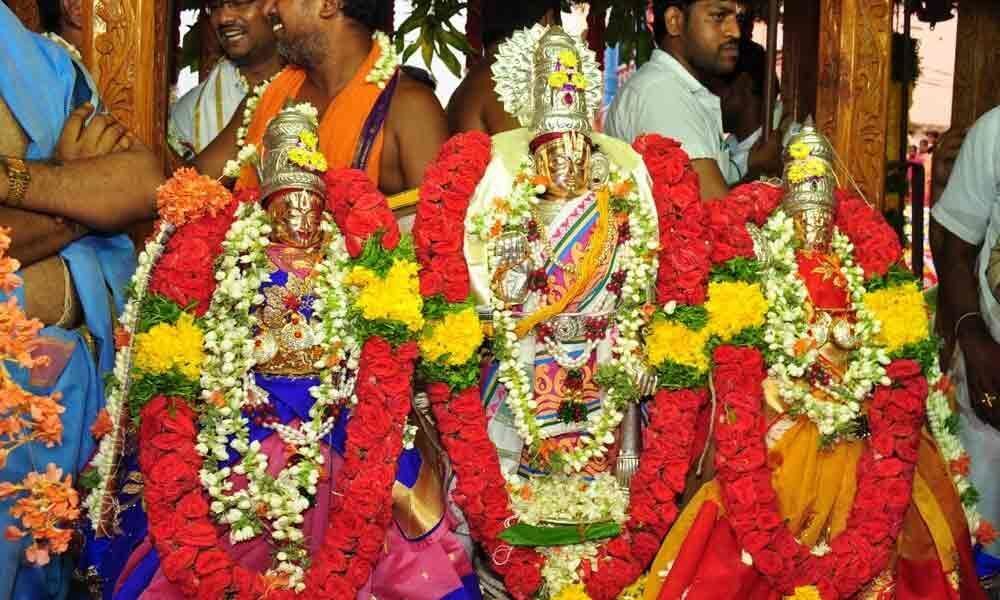 The revenue, police, fire, municipal and endowments departments announced that they have completed the arrangements for the grand event on Saturday,

Markapur: The revenue, police, fire, municipal and endowments departments announced that they have completed the arrangements for the grand event on Saturday, the Sridevi Bhudevi sametha Sri Lakshmi Chennakesava Swamy Rathotsvam.

The temple Festival Committee assistant secretary Kopparapu Srinivasa Rao said that they are expecting nearly one lakh devotees reach Markapuram on Saturday to participate in the Chariot Festival of the Chennakesava Swamy. He said that the men from the fire department will bring out the chariot from the shed and clean at around 10 am and the temple staff completes the decoration of the celestial vehicle with flowers and garlands especially brought from Bengaluru by 12 pm.

He said the newly wedded celestial couple reaches the chariot chamber and participates in the Viswaksena Puja and other traditional ceremonies performed by the chief priest Nandhyala Tirumalacharyulu, priests Sripati Appanacharyulu, Nandhyala Ramanacharyulu, and others.

The temple executive officer B Ramesh said that the rathotsavam starts by 5 pm, along the way through the four madaveedhis. He said that the chariot will go through the Teruveedhi, Rajaji Bazaar, old bus stand, clock tower centre, Peda Dornala bus stand centre and Naidu Veedhi before reaching the chariot chamber by 8 pm.