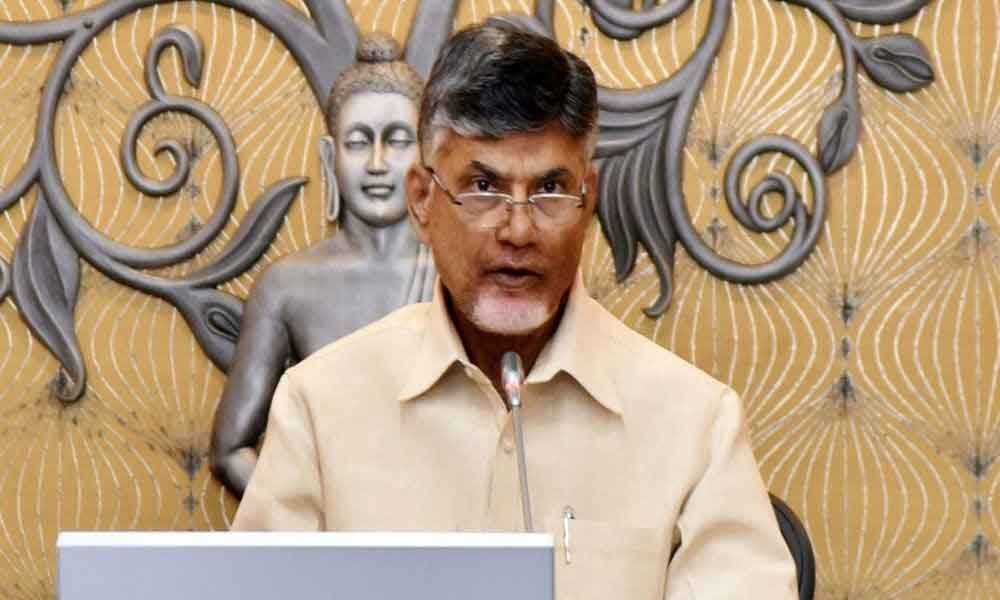 The chief minister and TDP president N Chandrababu Naidu wrote a letter to Election Commission of India, demanding to allow him to discharge his constitutional duties as people of Andhra Pradesh gave mandate, on Friday.

Amaravati:The chief minister and TDP president N Chandrababu Naidu wrote a letter to Election Commission of India, demanding to allow him to discharge his constitutional duties as people of Andhra Pradesh gave mandate, on Friday. He wrote this letter after The Hans India published a news on the powers of CM during code of conduct.

The CMO authorises released that letter to media here. He said that the election commission has been showing discrimination against AP government and creating unnecessary problems. He said that as elections in the state were completed in the first phase and there is long gap for counting, the normal government should not be get standstill on the name of Model Code of Conduct.

The chief minister's letter as it is...

"I wish to bring to your kind notice the incidents that have been happening in the state of Andhra Pradesh ever since the declaration of elections took place. There were many instances of unilateral actions on the part of the Election Commission of India (ECI), that have compelled us to bring to your notice time and again.

Whether it is unilateral transfer of the DG Intelligence (who was also in-charge of security of Hon'ble CM's Z plus security) or the unilateral transfer of Superintendents of Police of various districts or the transfer of Chief Secretary without seeking a panel from the state government, the Election Commission of India acted on the frivolous and frequent complaints by office bearers of opposition party in AP i.e. YSRCP.

Further, during my one to one interaction with the full Election Commission of India in New Delhi, I have brought to the notice of Election Commission of India about the failure of the Election Commission of India and it's machinery during the poll day of Phase 1 of General Elections-2019 in AP on April 11, 2019, depriving many people of their right to vote and causing enormous pain and suffering to the people of Andhra Pradesh on the voting day. At many polling stations the polling process could commence only at 1:00 p.m. instead of the scheduled time of 7:00 a.m., and the polling continued up to 4:30 a.m. (early morning of 12th) the next day. This itself is a vindication of our complaint regarding gross failure of the Election Commission of India and it's machinery. It is a fact that none of the complaints filed by the Telugu Desam Party (TDP) was acted upon; whether it is regarding punitive action against the offenders who tried for the deletion of TDP votes through pseudonymous Form 7 complaints, or many other complaints like discriminatory raids by income tax authorities only on the Telugu Desam Party leaders and candidates; or scandalous and baseless false news against TDP leaders and state government in the Telugu news paper and news channel Sakshi owned by the leader of YSRCP.

On the other hand each and every complaint filed by the opposition YSRCP has been promptly acted upon (as a matter of fact the complainant opposition party has in advance claimed that their complaints would be acted upon), that exposed the double standards displayed by the Election Commission of India and its machinery.

In this context, I am writing this letter to appraise you of the post-election scenario in the State and seek directions to the CEO so that the normal administration in the State goes on unobstructed and critical issues of citizens of the State and priorities of the people of the State and the Government that have seasonal confinements are immediately attended to.

The objective of Model Code of Conduct is to ensure level playing field to all contesting political parties. While complying with all the directives of the Election Commission of India, the State Government of Andhra Pradesh has brought to the notice of the ECI the travails and sufferings of people on the day of elections vide my letter dated 13-04-2019. In my 40 years of public life as a senior politician and administrator of this country, I have never seen an election which was so badly conducted, logistically mismanaged and poorly organized.

Post elections, the citizens of the State expected that the normal administration shall resume since the elections are over and the democratic governance shall prevail. As part of my Constitutional responsibilities, I decided to review various departments of public importance like drinking water, Polavaram project, construction of new capital city and disaster management etc., But it was surprising and shocking to see the comments made by the CEO, Andhra Pradesh that were released into the media.

CEO's reported comments are without any jurisdiction as there is no such provision in Model Code of Conduct that Chief Minister cannot hold review meetings. Though I am duty bound and empowered to conduct review meetings, I am constrained by the embarrassing apprehensions faced by the concerned participating officers due to the reported misinformation spread by the CEO in the media.

He is exceeding his jurisdiction. He has also instructed Addl DG (Intelligence) who works directly under the control of Chief Minister not to report to Chief Minister. Because of his illegal orders, Addl DG (Intelligence) is not reporting to me. I would like to know from Election Commission of India, whether the reporting authority of Addl DG (Intelligence) is also changed by Election Commission of India and if so, who is his reporting authority, if not Chief Minister. Who will assess his performance and who will write his ACR ? Do you want to say that Director (IB) and National Security Advisor are also prohibited from functioning under the Prime Minister and they are prohibited from meeting and briefing Prime Minister.

As you are aware since there is a gap of nearly 6 weeks between the conclusion of the elections and counting process of the polled votes, it is not constitutionally and legally correct to deprive the people of the State the right to be governed by their democratically elected government for a period of 5 years.

The comments made by CEO, Andhra Pradesh are not only absurd and arbitrary, but also belittle the relevance and primacy of political governance in a Democratic Polity after scrupulously observing and complying with various provisions of the Model Code of Conduct during the election process. ECI has no authority to bar elected government from discharging their legitimate duties entrusted on them by the Constitution of India. It is nothing but usurping the powers of a democratically elected government by ECI.

Similarly, in the neighboring state of Telangana various departmental review meetings are being conducted by the Chief Minister, Telangana. With deep pain and anguish, I take strong exception to this discriminatory approach of the Election Commission of India in facilitating functioning of BJP led Central Government & States ruled by BJP & its allies and denying the same to the State of Andhra Pradesh.

As you are aware, the State of Andhra Pradesh has gone to elections both for Assembly and Parliament simultaneously, during the first phase of General Elections-2019 on 11th April 2019. The election process was completed on 12th April 2019. The counting is scheduled to take place on 23rd May, 2019, since there is an unusual large gap of around 42 days before the counting takes place and results are announced, the normal administration shall not be allowed to come to a standstill and crippled. There are many priority issues at the State level which affect the State's immediate future; like the Polavaram irrigation project, considered the lifeline of Andhra Pradesh which would facilitate supply of drinking water and irrigation water to the people by gravity in next few months provided some vital parts of the remaining 30% works are expeditiously completed. Before the declaration of assembly elections, the progress review of the Polavaram project was done once in every week on Monday declaring Monday as Water Resources Day.

Besides, many other critical infrastructure projects, especially the new capital construction works like the residential buildings of the Members of Legislative Assembly and the All India Service Officers, the Secretariat Employees and other Government Staff besides Judiciary Buildings which are at a critical stage need to be pursued with continued vigour, focus and dedication.

Further, the delay in execution of the important projects at the state level, may lead to loss of time and huge cost overruns, for which somebody has to be made responsible at a later stage to pay the extra cost incurred.

For timely completion of the prestigious capital project, maximum works need to be completed before the monsoons descend, requiring a continuous review of these projects by the Chief Minister. Moreover, the weather prediction reports indicate isolated heavy showers and natural calamities that may cause immense damage to the people as well as their standing crops. It is further submitted, with the temperatures souring up to 43 degrees Celsius in the month of April itself, the summer and heat wave conditions are so severe and as a result, causing severe water distress at many places.

Last week, 7 people died due to thunderbolt in the entire State. The deaths could have been averted had the democratically elected government was allowed to function. Chief Minister could have monitored & implemented preventive measures, to save 7 precious lives lost during thunderbolt. Who is responsible for these deaths? It appears, the Election Commission of India has intentionally paralyzed the State administration. These are some of the many critical issues that require urgent attention of the State Government and cannot be postponed till 23rd May 2019.

Election Commission of India cannot stop reviewing any of these projects or issues which are ongoing and do not violate any Model Code of Conduct. Since the electorate has already exercised their franchise, ECI has no jurisdiction to stop any review meeting by me or briefing by the officers. Since these works are seasonal and time bound progress shall be achieved, so that the people of the state are not deprived of timely benefits of these projects, immediate expeditious action is required for which immediate directions of ECI to all the concerned are required, so that normal administration and ongoing vital priority projects that shape the future of the State are continued and completed as per the time schedules decided earlier. ECI will be solely responsible for all the cost overrun & loss of time of these projects.

The people of Andhra Pradesh reserve the right to recover the cost overrun amounts from all concerned personally who come in the way of timely completion of these projects by initiating appropriate legal proceedings.

Hence, the Election Commission of India is duty bound to issue instructions to the CEO, Andhra Pradesh and all others concerned not to interrupt the legitimate functioning of the elected government & review by Chief Minister in order to ensure people of Andhra Pradesh are not put to undue hardship, not deprived of democratic governance and the development of the state is not adversely affected.