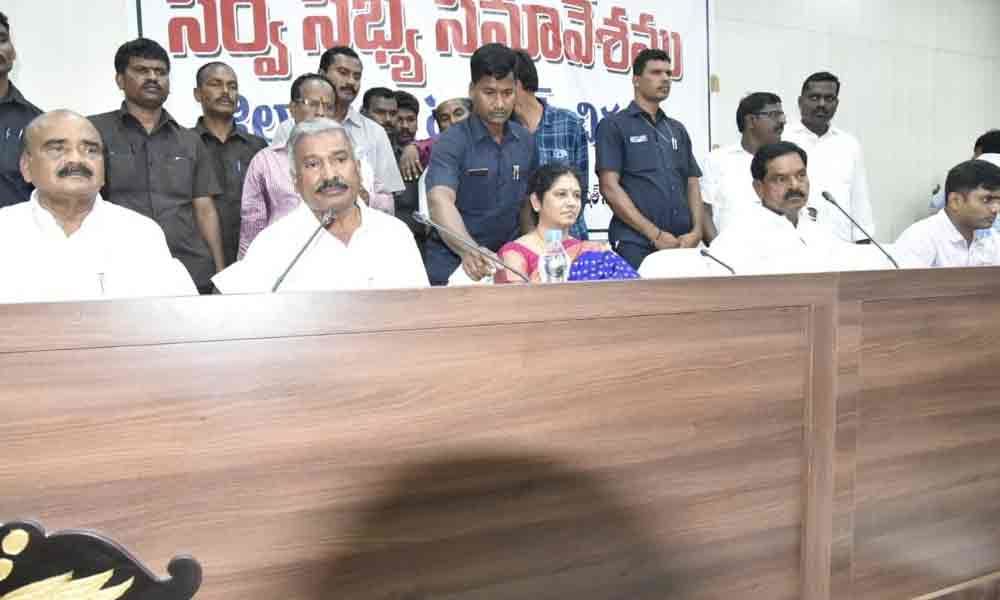 Chittoor: Minister for Panchayat Raj and Mines P Ramachandra Reddy stated that Chief Minister Y S Jagan Mohan Reddy was committed for ensuring a transparent and corruption-free Government. People's participation in all the developmental schemes will be made mandatory irrespective political affiliations, he said.

Addressing the ZP General Body Meeting , Minister P Ramachandra Reddy stated that the district has been facing acute drinking water shortage. " The Government has decided to transport water through hired tankers with immediate effect to all the villages and urban pockets, and funds availability is not a problem.

The district administration should gear up in this regard "he further said. He announced the Government was exploring all ways and means for the comprehensive development of villages. He instructed the officials to take up strict measures against sand smugglers and added that the Government will shortly declare the sand policy. The Minister further said that priority will be given for completing the ongoing irrigation projects like HNSS and others.

Dy.Chief Minister K Narayana Swamy, who is holding Excise and Commercial Taxes reiterated that Chief Minister Jagan Mohan Reddy was committed for implementing total prohibition in the state in a phased manner . He felt that there was dire need for reforming the Government Social Welfare Hostels.

MLAs K Roja (Nagari) , B Karunakara Reddy (Tirupati) and Ch Bhaskara Reddy ( Chandragiri) have not attended the meeting. All other legislators of YSRCP have attended the meet. At the end, ZP Chairperson Girvani has expressed her gratitude for all the members for extending their support during the last five years.