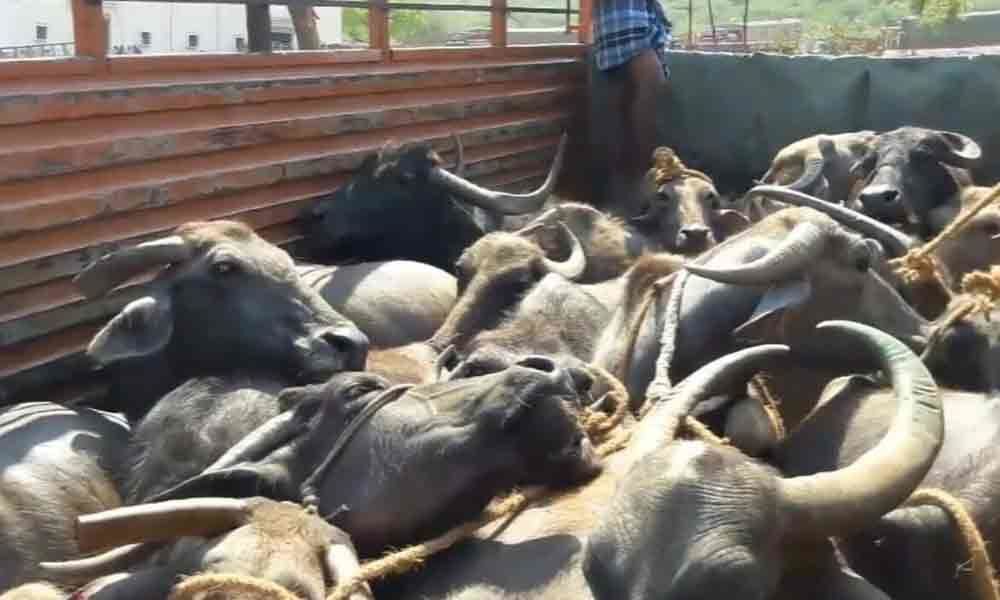 x
Cattle being transported to slaughterhouses in Kurnool district
Highlights

Continuous dry spell and scanty rainfall in the district resulted in fodder scarcity in Kurnool district.

Kurnool: Continuous dry spell and scanty rainfall in the district resulted in fodder scarcity in Kurnool district. The maize crop which was good in Khariff has withered in Rabi. With the abnormal rise in fodder prices the cattle owners are struggling to save the livestock. Some farmers who are unable to afford the prices are selling the cattle to slaughterhouses.

In Khariff season maize has been cultivated in an extent of nearly 38,000 hectares, of the total extent only 40 percent was harvested and in Rabi the extent has drastically come down to 1,370 hectares. With the abnormal decline in crops a tractor load of fodder is being sold at Rs.15,000.

M Manemma, a resident of Panchalingala village, who gets livelihood for her family depending on cattle, said to The Hans India, that she has 5 buffaloes. Of the five, three have dried up (not giving milk) and only two buffaloes are giving milk. With the amount generated from selling the milk, she has to feed 6 persons in the family besides providing fodder to the buffaloes.

Due to abnormal heat prevailing all the crops were dried up and there is no way to take the buffaloes to graze. But a tractor of paddy hay is being sold at Rs.15000 and a tractor would not be sufficient to meet the demand. At least four tractors of paddy hay are necessary to feed cattle for three months.

It is beyond out capability to invest such huge amount and buy the fodder. Every day we have to spare at least Rs.200 to feed the buffaloes. Some farmers, as they are unable to bear such huge amount, are selling them to slaughter houses, said Manemma.