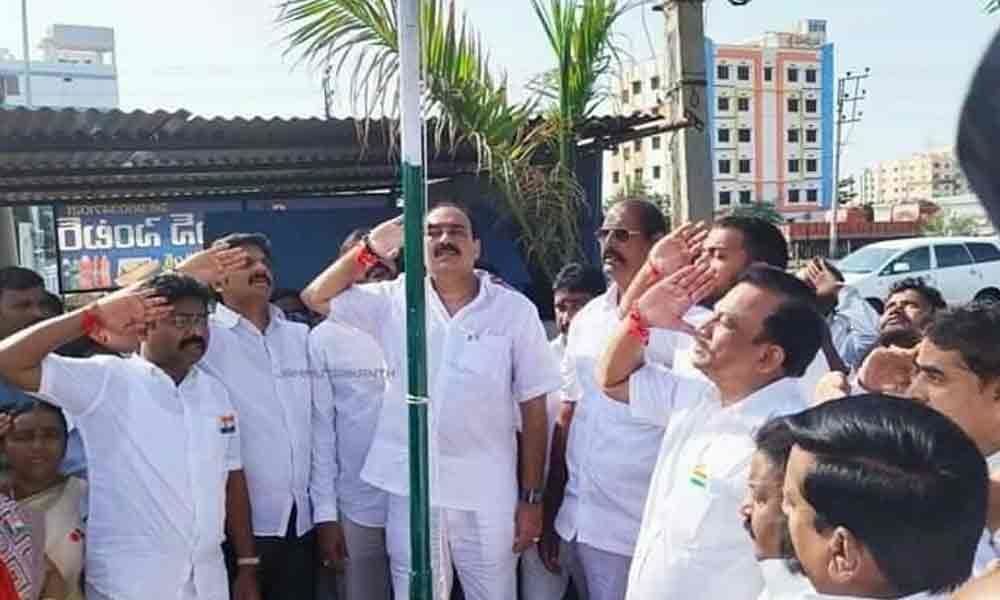 The public and staff of various institutions and offices including the district administration celebrated the 73rd Independence Day with patriotic fervour on Thursday.

Ongole: The public and staff of various institutions and offices including the district administration celebrated the 73rd Independence Day with patriotic fervour on Thursday.

Later, the Ministers Balineni Srinivasa Rao, Adimulapu Suresh participated in the flag hoisting at the CVN Reading Room and freed the doves into the air as a symbol of freedom. The joint collector S Shan Mohan hoisted the national flag at the district collectorate and asked the cooperation of the staff in distributing the fruits of the freedom to the eligible.

They planted trees at Parchuru in association with the VOP Foundation as part of the Save Trees campaign. Sambasiva Rao also hoisted the national flag at his camp office and mandal parishad office in Martur. Kandukur MLA Manugunta Mahidhar Reddy hoisted the tricolour at the Area General Hospital and Municipal Office in Kandukur.

Former Minister and treasurer of the Telugu Desam Party Sidda Raghavarao hoisted the flag at Prakasam district TDP office in Ongole. The TDP leaders Mantri Srinivasa Rao, Kamepalli Srinivasa Rao and others participated in the programme.

The members of Lions Club of Ongole Citizens participated in the flag hoisting at the Andhra High School in 60 feet road. They felicitated Sk Iqbal, who lost his leg in the Kargil war and said that the tricolour is flying high from Kashmir to Kanyakumari on this Independence Day.

The Andhra Bank Ongole zonal manager P Ramakrishna hoisted the flag at the zonal office and the other staff members joined him. At the celebrations at the APNGOs Association in Ongole, the district president Kuchipudi Sarath and secretary RCH Krishna Reddy participated as the chief guests.