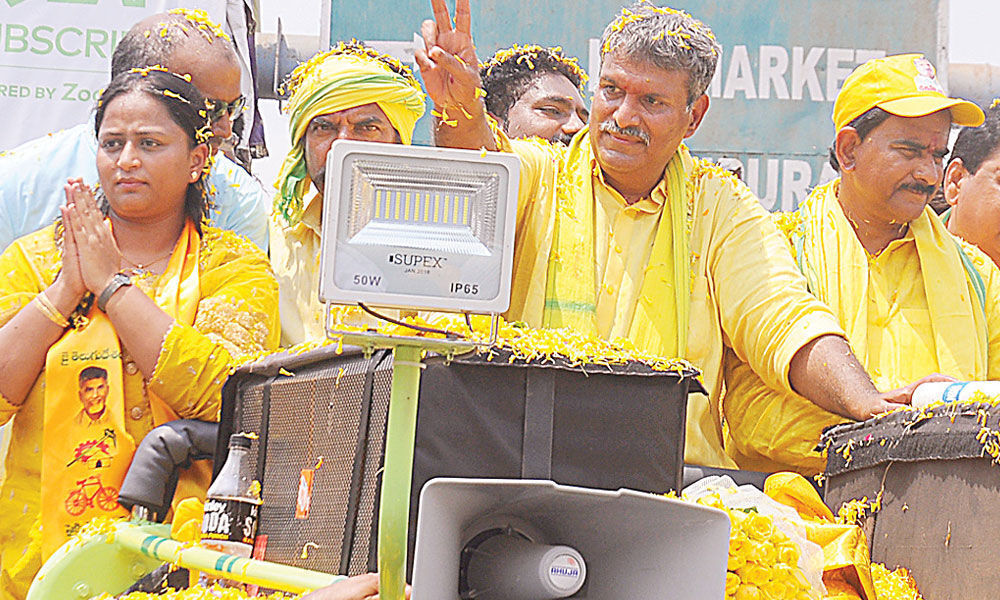 Vijayawada: Filing of nominations for the Assembly and Lok Sabha segments continued on the fifth day Friday in Krishna district. The nominees filed...

Vijayawada: Filing of nominations for the Assembly and Lok Sabha segments continued on the fifth day Friday in Krishna district. The nominees filed nominations after the parties cadre taken out huge processions in Vijayawada and other parts of the district.

Kesineni Srinivas was elected in 2014 and locked horns with Potluri Varaprasad, the YSRCP candidate. The TDP and YSRCP candidates took out huge processions in Vijayawada city to mark the filing of nominations at the Sub-collector's office.

P Varprasad later briefing the media said the YSRCP would win the elections and party president Jaganmohan Reddy would become the Chief Minister. He said there was a huge response from people to the YSRCP and he would explain the people about the Nava Ratnalu, announced by the party in its election manifesto in the election campaign.

Earlier, he performed puja at Sri Venkateswara Swamy temple in Patamata and participated in the procession, which passed via Patamata, Benz circle, Labbipet and reached the Sub-collector's office.

The YSRCP cadre took out a mega rally to show the party strength in the town. Udaya Bhanu locked horns with the sitting TDP MLA Sriram Rajgopal alias Tataiah.Vijayawada West Assembly constituency YSRCP nominee Velampalli Srinivas filed nomination papers on Friday. He submitted the nomination papers to the RO at the Model guest house near Prakasam barrage. He participated in the mega rally organised by the party.