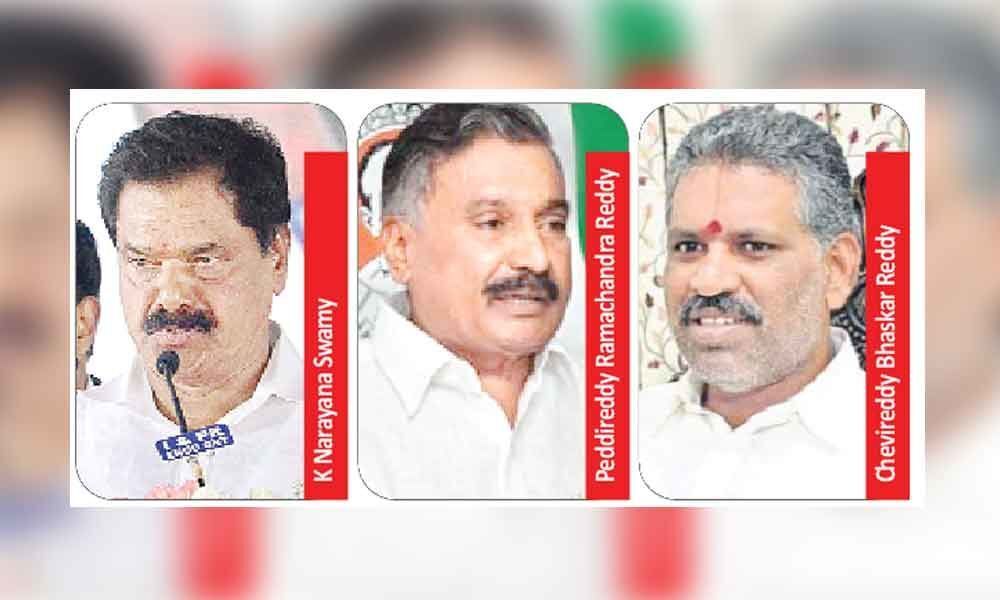 Punganur MLA Peddireddy Ramachandra Reddy and Gangadhara Nellore (GD Nellore) MLA K Narayana Swamy took oath as Ministers. Narayana Swamy is one of the five Deputy Chief Ministers and will look after Excise and Commercial Taxes – the two departments which fetch major part of revenue to the government.

Peddireddy gets important portfolios of Panchayat Raj and Rural Development along with Mines and Geology. MLA from Chandragiri Chevireddy Bhaskar Reddy will take over as Whip.

In a balancing act, Chief Minister considered loyalty as the most important factor above all other things, which was evident from his choice of Ministers. Former Chief Minister N Chandrababu Naidu's home district has gifted 13 MLAs out of 14 to YSRCP and Jagan Mohan Reddy had kept it in mind while allocating portfolios.

The two money-spinning departments – Excise and Commercial Taxes were given to Narayana Swamy which is considered to be crucial at this juncture where the State stands at cross roads with severe financial constraints. Also, the government wants to impose prohibition in phased manner by curtailing belt shops and reducing the number of liquor shops gradually.

Peddireddy Ramachandra Reddy will have to look after Panchayat Raj and Rural Development which are crucial for any government along with Municipal Administration.

The government is expected to go for Panchayat Raj polls soon and Peddireddy has to work hard in his ministry so that the party will get tremendous results in forthcoming polls. Mining was another area that occupied importance as the State was enriched with heavy minerals in the long coastline and government may attract investments in these areas.

It may be mentioned that both Peddireddy and Narayana Swamy have led the party in different capacities. While Narayana Swamy was the Party District Chief from 2011 to 2018 and was working as its State General Secretary, Peddireddy was behind every activity of the party in the district and helped it consolidate its position in every constituency.

With his financial strength and strong group of contingent in the entire district, he was instrumental in the success of several other MLAs also. Chevireddy was known for his fire brand attitude and Chief Minister might have felt that he will be suitable for the post of Whip in the Assembly.