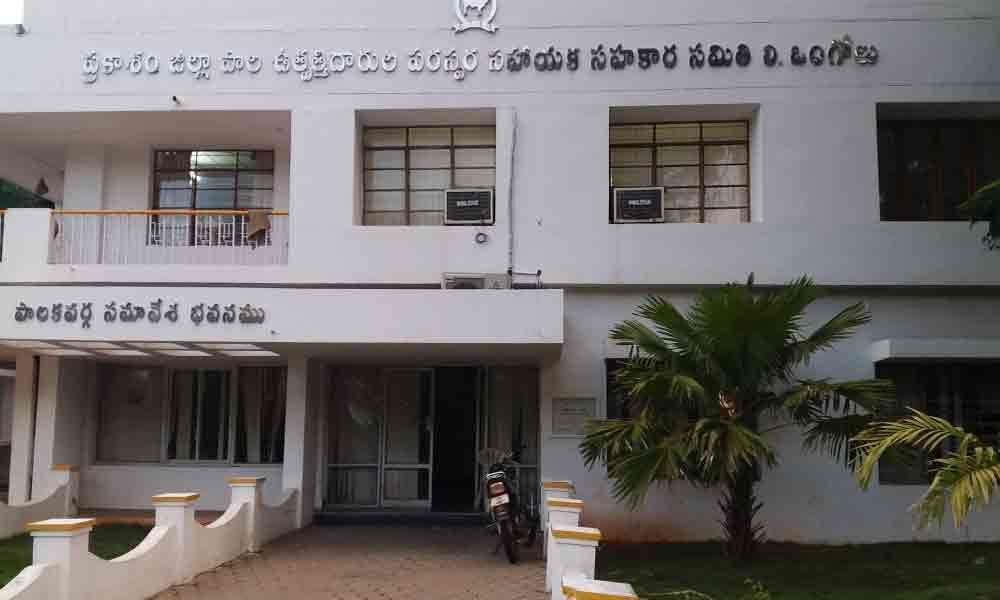 The ongoing forensic audit by the experts reveals that the once booming Ongole Dairy which even paid bonus to milk producers, is forced to go into losses due to the making and sale of milk powder at nearly 50 per cent less than the manufacturing cost.

Ongole: The ongoing forensic audit by the experts reveals that the once booming Ongole Dairy which even paid bonus to milk producers, is forced to go into losses due to the making and sale of milk powder at nearly 50 per cent less than the manufacturing cost. The dairy is looking at the prospects of even closure.

The Ongole Dairy, which was under the Andhra Pradesh Mutually Cooperative Societies Act 1995, was brought under the Companies Act in 2013 by the then chairman Challa Srinivasa Rao. Later, the dairy declared profits and distributed bonuses to the farmers, just before the 2014 Assembly and general elections.

As it is the only dairy that can produce milk powder in state and having orders from the Karnataka Milk Federation (KMF) and other dairies, the Ongole Dairy was said to be enjoying profits until 2016. The dairy reported a loss of Rs 7.29 crore on March 31, 2017, while it reported a profit of Rs 0.71 crore the previous year. Since 2017, the dairy claimed that the losses are rampant and claimed that it has Rs 83.80 crore liabilities by June 2018.

After the continuous agitations by employees for their salaries and farmers for the dues pending for more than six months, the government offered Rs 35 crore as a package to settle the immediate bills. It appointed AP Dairy Development Board chairman J Murali as the CMD of the Ongole Dairy and the joint collector and other officials as the directors as the board of directors and ordered them to bring Ongole Dairy on track again.

The farmers and employees made allegations against the TDP leader and former chairman of the dairy Challa Srinivasa Rao and his supporters in the board for many violations and financial fraud to the tune of more than Rs 150 crore. After many representations, a forensic audit was ordered by the government under the leadership of P Samuel about six months ago.

But by then, many of the senior employees resigned and only a limited number of the staff is available to the auditors to give any details about incidents from February 2013 to March 2018. The CEO, AO, and other new staff, who are alleged to be influenced by the old management, is said to be noncooperative with the auditors.

An auditor in the forensic audit team told The Hans India that they had received 80 per cent of the required files, but the crucial files are kept hidden from them. He said after going through the files, they found that the dairy was never in profit since 2013, but the management fabricated records and made them signed by the auditor to show some profit every year.

As they showed profits, they took loans from the banks by mortgaging assets, overdrafts, etc., and paid bonuses to turn farmers in favourable to a political party, he said. To conveniently escape from the responsibility, he said that the then management members registered the dairy as a company, he observed.

The auditor shared that the dairy had produced milk powder from the milk from KMF with an expenditure of Rs 240 per kilogram, but supplied it to Amrit, Malani and other dairies in north India at just Rs 120 per kg. He also said that they observed that the earlier management has not taken any strategic decision to develop the dairy, or introduced any new product to develop business, but exhibited fraudulent behaviour like withdrawing money often in the name of repairs and other expenses.

He said that they do not have all proofs for these but are suspecting that a fraud happened to the tune of Rs 150 crore, mostly from the milk powder, which might have been pocketed by members of the earlier management.

The joint collector and one of the board members of the Ongole dairy, S Nagalakshmi said that she too had some information about the noncooperation of the dairy employees to the forensic audit team. She said that she will order to make available of all records to the auditors and see stringent action is taken on all people involved in bringing losses to the dairy and order recoveries pending from them.