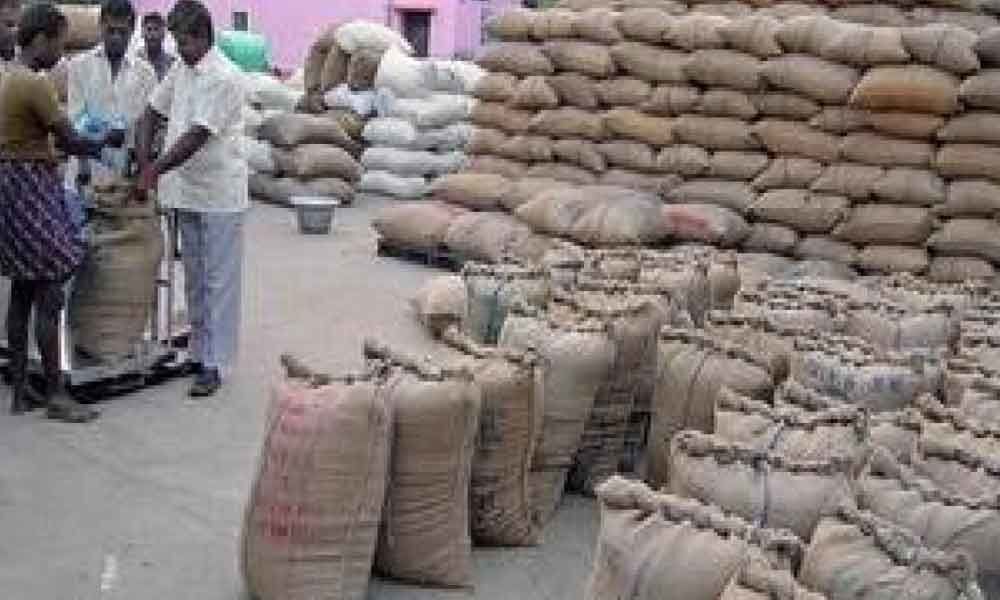 Millers and middlemen have been cheating the paddy farmers since the administration has been busy with elections. Farmers who produced paddy were exploited with low price where Paddy Procurement Centres have simply played the role of spectator.

Nellore: Millers and middlemen have been cheating the paddy farmers since the administration has been busy with elections. Farmers who produced paddy were exploited with low price where Paddy Procurement Centres have simply played the role of spectator.

Though the administration had estimated that procurement would be around 3 lakh metric tonnes of paddy this season, they were able to procure only 40,000 MTs which indicates role of official mechanism in the district. The state government had fixed price of Rs. 15,045 per putti (850 Kg) and the middlemen paid Rs. 11,600-11,800 per putti.

Besides, farmers have to bear 3 kg of paddy additionally per 40 kg bag in the name of wastage. Actually, Civil Supplies Department had started 98 Paddy Procurement Centres across the district and farmers have cultivated in around 2.50 lakh acres. Civil supplies officials have deployed staff along with tablets to enter data of paddy cultivation on the spot that was getting ready for cutting.

Common variety of paddy per putti was at Rs.13, 175 and A-Grade paddy was at Rs.13, 515 during 2018 procurement. Paddy was cultivated in 3 lakh acres in 2016-17 Rabi season and it was around 5 lakh acres during 2017-18. As usual, the district administration asked the millers to provide bank guarantees for Rs.47 crore and the middle men started directly approaching the farmers for buying crop from them as there was no strong vigilance from the officials who were busy with the polls.

"The syndicate of millers and middlemen irked the farmers. As and when millers refuse to take paddy stocks, middlemen enter and purchase them at lower cost. The purchasing centres arranged by the government were found to be name sake that failed to raise to the occasion," said K Venkata Ramana Reddy from Atmakur. He added that this time around 12-14 lakh puttis of paddy is expected to hit the market. He appealed to the district administration to take measures to save farmers in the district.