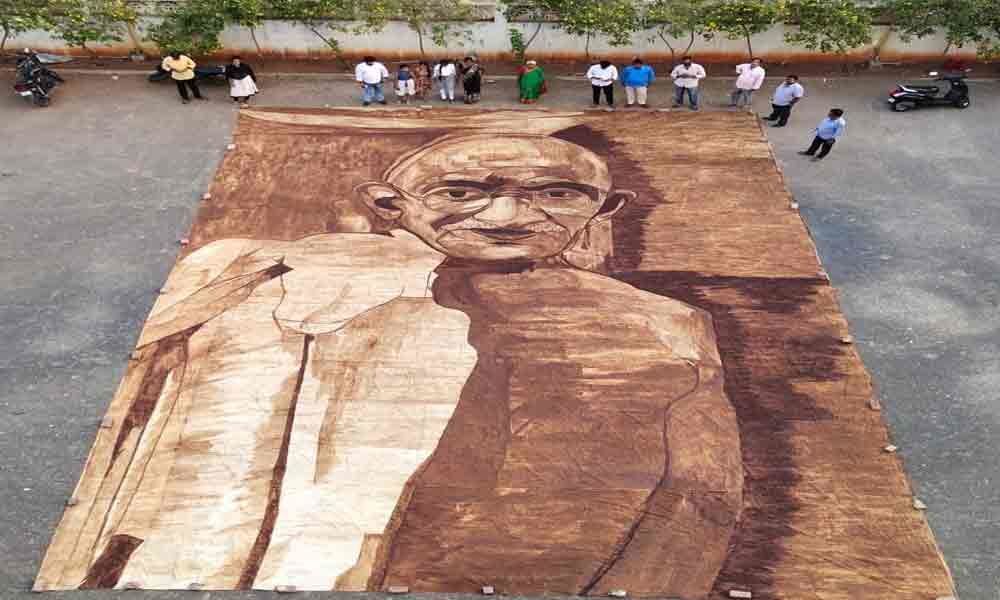 Art lovers, artists, and officials who witnessed the attempt of the Class X girl to enter the Guinness Book of World Records by making a portrait of...

Ongole: Art lovers, artists, and officials who witnessed the attempt of the Class X girl to enter the Guinness Book of World Records by making a portrait of Mahatma Gandhi with the coffee are spellbound by the perfection of the art and the commitment of the artist.

Adipudi Devisri is the teenager who is the talk of the town for the last three days. With interest in painting, she joined the Srushti Art Academy and learned the techniques along with developing a style of her own, using coffee and the waste powder on the canvas. The encouragement of her art teacher Timmiri Raveendra and parents Narendra and Nagalakshmi to her follow her mind and give shape to her thoughts helped her excel in the class and classical dance too.

In her pursuit to create a world record, Devisri started drawing the portrait of Mahatma Gandhi smiling on a 15x10 meters canvas on Tuesday and completed it successfully after three days on Friday. The noted artists, drawing teachers and officials who acted as the observers for the record attempt congratulated the girl and appreciated her commitment to complete the painting in time.

The drawing teacher Raveendra said that when she wanted to attempt for the Guinness record, they informed the concerned authorities and received a registration number with guidelines. He said that they have followed all instructions of the Guinness Book committee and made her drawing recorded on video continuously.

He said that they would send the video records and certificates from the officials confirming the attempt by the girl.In the meantime, the completed portrait is put for exhibition for the public at MHR Function Hall, beside TDP office in Ongole from the evening of Friday.