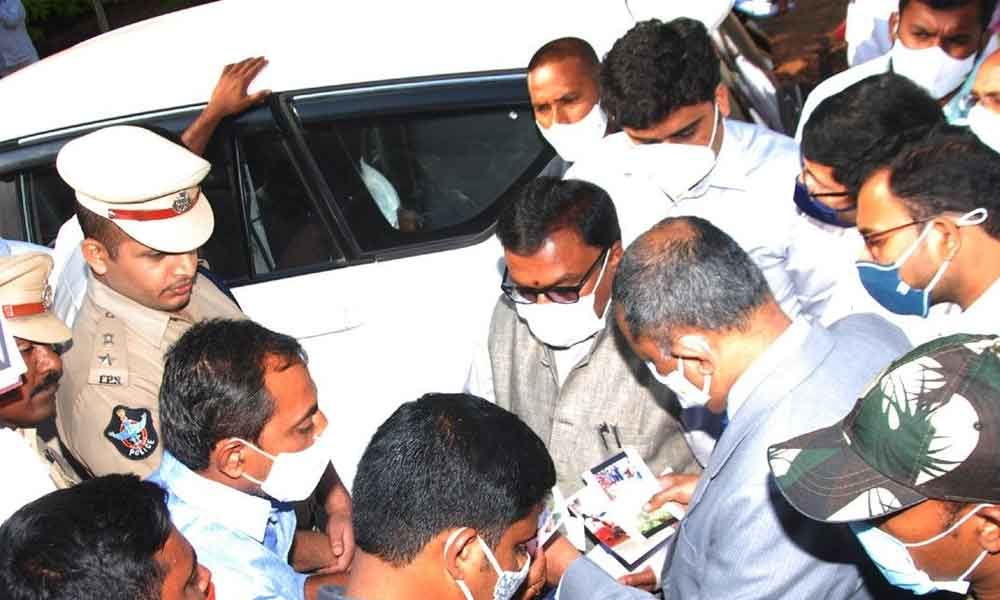 TDP leaders submitted representations and complaints to the State Election Commissioner Nimmagadda Ramesh Kumar, during his tour to Ongole on Thursday.

Ongole: TDP leaders submitted representations and complaints to the State Election Commissioner Nimmagadda Ramesh Kumar, during his tour to Ongole on Thursday.

Former Naguluppalapadu Mandal Parishad president Muppavarapu Veeraiah Chowdary complained to the SEC on the alleged involvement of the volunteers in the panchayat election campaign along with the candidates supported by the YSRCP. Veeraiah explained the SEC that the volunteers in Ammanabrolu major panchayat were allegedly warning the beneficiaries of Amma Vodi, Cheyutha, housing plots and other pension programmes that their names will be deleted from the beneficiaries list if they didn't vote for the candidates supported by YSRCP. He submitted photo and video proofs to the SEC and told the volunteers are participating in the campaigning and nominations by wearing YSRCP towels along with the candidates and requested him for the dismiss of their services immediately to provide a fair environment.

BC Reservation Parirakshana Samithi president Potikalapudi Jayaram complained to the SEC that the Giddalur municipal council chairman candidate RD Ramakrishna Rao, who is supported by the YSRCP, is not a BC but an OC candidate. He alleged that Ramakrishna Rao himself claimed to belong to OC- Balija caste in his self-declaration submitted to the government in 2014, when he applied for the Agriculture market yard president nominated post. He said that the chairman candidate has received the BC caste certificate by submitting forgery and fake certificates. Jayaram said that the SEC has ordered the collector to inquire on the caste certificate of Ramakrishna Rao. Ongole Telugu Desam Party leaders Kothari Nageswara Rao, Kamepalli Srinivasa Rao and others complained to the SEC to take action on the alleged warnings and threats to the contestants against the candidates supported by the YSRCP to withdraw their nominations and make the election unanimous. They requested him to take action on the irregularities and protect democracy.