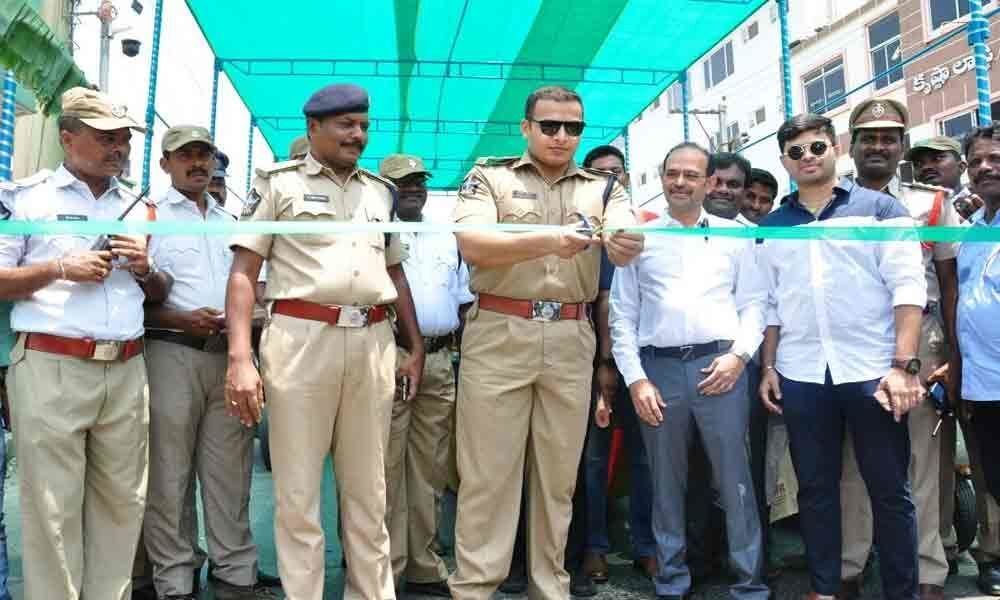 An initiative by the Prakasam district police department received wide response from the people.

Ongole: An initiative by the Prakasam district police department received wide response from the people. The green shaded tents erected at the traffic signals near RTC Bus Stand are providing relief to people waiting there, from the scorching sun and inspiring other good Samaritans also to come forward to serve people with nominal expenditure. As the mercury is above 40 degree Celsius since last month, the government has taken up various initiatives and advised people not to come onto roads between 10.00 am and 04.00 pm.

The local bodies and voluntary organisations are providing drinking water, buttermilk while the medical and health department is supplying ORS packets free of cost at the kiosks and hot wave relief centers established in Ongole and other towns in the district. The police department also came up with an idea to serve people who are plying in road even in the heatwave due to various reasons like the job or any emergency work.

The department observed that the people on the motorbikes or bicycles are waiting at the traffic signals for 90 seconds in the blazing sun and wanted to provide relief to them. The police department gave a call to organisations and establishments to come forward to set up tents at traffic islands to provide shelter to people waiting there.

The first green shaded tent is established at the RTC Bus Stand on Saturday with the help of BMR Jewellers and the SP Siddarth Kaushal inaugurated it. Siddharth told The Hans India that the police department is trying to erect such tents at all traffic junctions and are welcoming the good Samaritans voluntarily.

Traffic DSP K Venugopal said the tents are being erected with 23 feet in height and a minimum of 60 feet in length, depending on the maximum distance that vehicles wait in peak time at the specific junction.

He said the structure would be installed for permanently while the green cover shade net should be required to be changed every year. He said that one permanent tent of 23 feet in height and 60 feet in length would cost around Rs 70,000 and the annual changing of shade net would cost Rs 5,000 to Rs 10,000 depending on the length.

He said the police department is allowing the donors to place their publicity material on the tent as a token of their service to public but they should not obstruct the view of the CC cameras. He welcomed the voluntary organisations and establishments or any other interested people to meet him for finalisation of location and size of the tent.