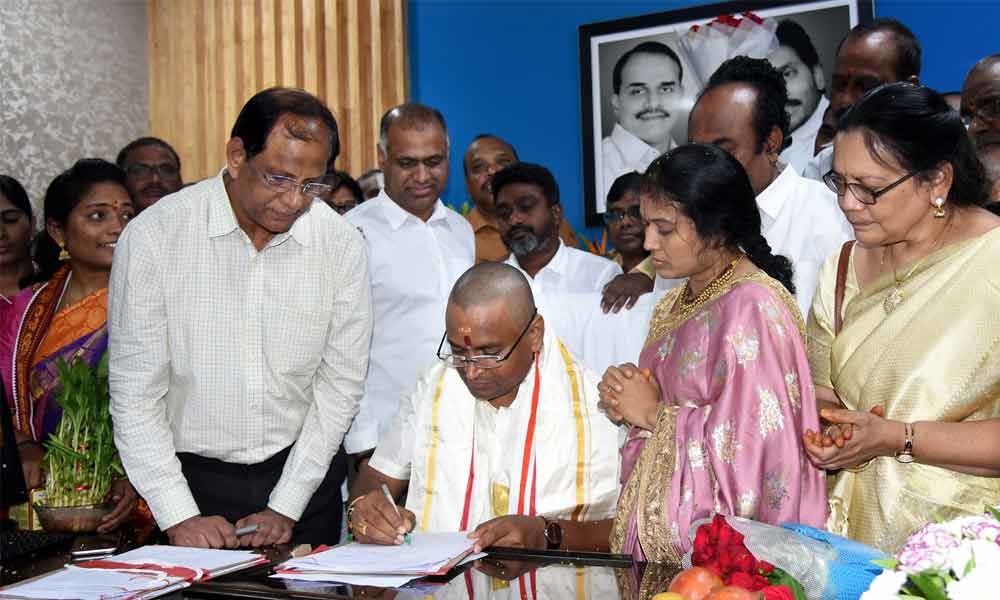 Minister for Endowments Velampalli Srinivasa Rao announced that the government will provide house sites to all the eligible priests working in department temples across the State.

Amaravati: Minister for Endowments Velampalli Srinivasa Rao announced that the government will provide house sites to all the eligible priests working in department temples across the State.

After performing puja at his chamber while occupying the chair for the first time as Minister on Friday, he said that he instructed the officials to prepare the list of beneficiaries to provide house sites to the priests as promised in the YSRCP manifesto.

It is estimated that at least 6,000 employees have been working in the endowment temples.

Srinivasa Rao signed on a file related to transfers of staff in the Endowments department working at various temples in the State. He suggested preparing preliminary notification.

After publishing the draft notification, the staff could submit their suggestions or objections to the Endowments Commissioner, he said. Then, the government will finalise the rules and regulations for the staff of temples and charitable institutions, he informed.

The Minister said that additional Rs 8.60 cr budget will be allocated to provide 25 per cent hike in the honorarium to the priests working in the temples.

All the pending vacancies in the department will be fill up within short span of time, he announced. A master plan for 11 major and 72 important temples in the State will be finalised very soon to facilitate free and easy darshan to all the devotees.