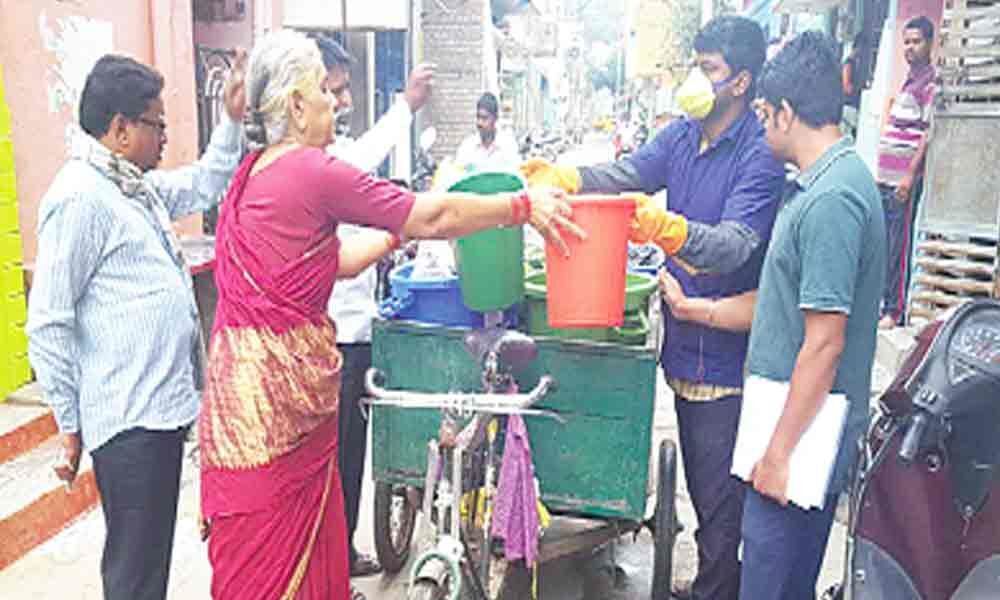 The segregation of waste taken up by the Municipal Corporation of Tirupati (MCT) proving a tough task to it with only 60 per cent of the households complies with it.

Tirupati: The segregation of waste taken up by the Municipal Corporation of Tirupati (MCT) proving a tough task to it with only 60 per cent of the households complies with it. Interestingly, the localities where the poor and middle class are predominant doing well compared to the posh localities in the segregation of waste which was introduced by the corporation at household level on April 1.

The corporation made segregation of waste into wet and dry compulsory before it was handed over to the garbage collector in select 100 'micro pockets' against the total 371 in the pilgrim city for the purpose of making the recycle of dry waste easy and use the wet waste for compost.

A health worker Susheela said that despite her repeated requests most of the householders in her area not complying with the segregation of waste and continuing the handing over of waste dry and waste mixed.

In the beginning, only few handed over the dry and wet waste separately but now nearly 50 per cent following segregation of waste after relentless persuasion for over a month, she said indicating that it may take few more months to achieve 100 percent segregation of waste at source i.e. householders.

Another health worker Munemma revealed that she went to the extent of warning some of the householders to refuse collection of garbage from their homes if they did not segregate the waste. Some fell in line but many still handing over the waste without segregating it, she said adding that waste segregation is proving a tough nut for them to crack.

Sanitary supervisor Govardhan admitted that the waste segregation at source proving an uphill task but exuded the confidence that they would achieve hundred percent in a month. "We are reviewing the execution of the waste segregation 'micro pocket wise' and not hesitating to take a tough action on those not comply with it.

The performance of posh localities range 30 to 50 per cent while slums 50 to 70 per cent he said, informing that intense awareness campaign is on to reach 100 per cent waste segregation in all areas.

The segregated waste will be taken to Tukivakam corporation yard where the dry waste will be sold after segregation again to the contractor for reuse while wet use for compost by the corporation.