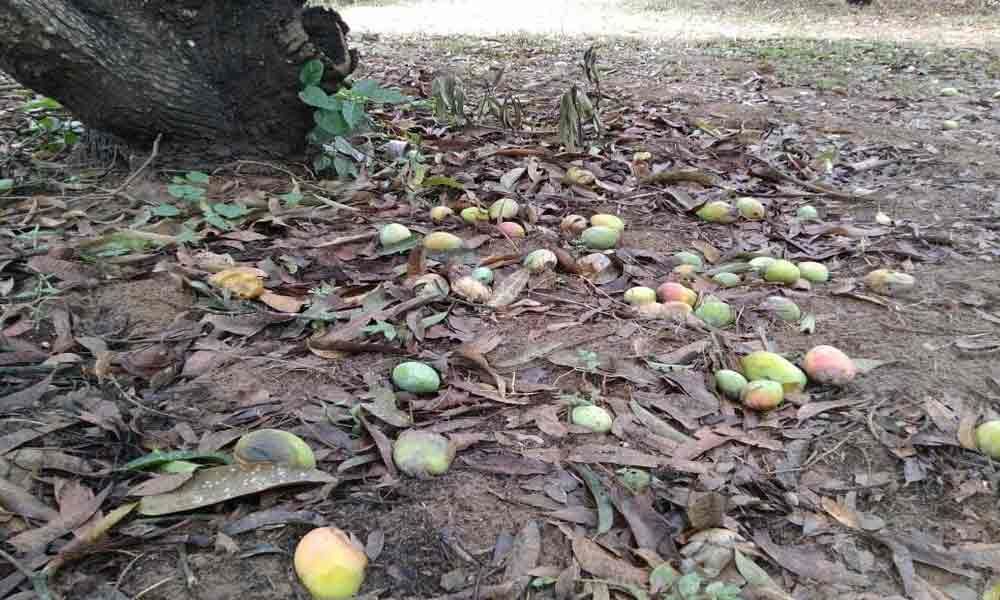 Horticulture crops like banana is damaged in some areas due to strong gales caused by Fani cyclone.

Vizianagaram: Horticulture crops like banana is damaged in some areas due to strong gales caused by Fani cyclone. As per primary estimation, banana plantations in 350 hectares was damaged in Kurupam and GL Puram areas. Apart from banana, mango farmers also got affected as the nuts about to harvest in coming few days were dropped. The nuts can't be either ripen or sell them alone.

The district has not received good rainfall in the past two days and the cyclone did not bring any rains. Only some mandals like Gurla, Nellimarla, Cheepuurupalli, Bhogapuram received rains. The district got an average of 12.5 mm of rain. On the other hand, strong gales damaged the horticulture crops like banana and mangoes. Banana trees with bunches of nuts and the farmers in Kurupam lost their crops.

Mango crop in Merakamudidam, Cheepurupalli and Nellimarla have been damaged. Huge quantity of nuts was dropped and the farmers were worrying that they can't sell them in the market and even ripen them. K Narayana of Tamarapalli village of Gantyada stated "We are planning to harvest the mangoes in next week, but the strong gales have washed out our dreams.

We will be landed in huge debt now." On the other side, the showers are helpful to vegetable crops like brinjal, tomato and ladyfinger. But the farmers disappointed with the less rainfall as they expected heavy downpour and the water tanks will be filled and helpful to irrigation and drinking water needs.

Deputy Director of Horticulture K Srinivasa Rao stated that they were estimating the loss caused for banana farmers and will send a report to the government soon. Even the fishermen living in coastal villages felt relief as there is no major damage to their houses and properties.