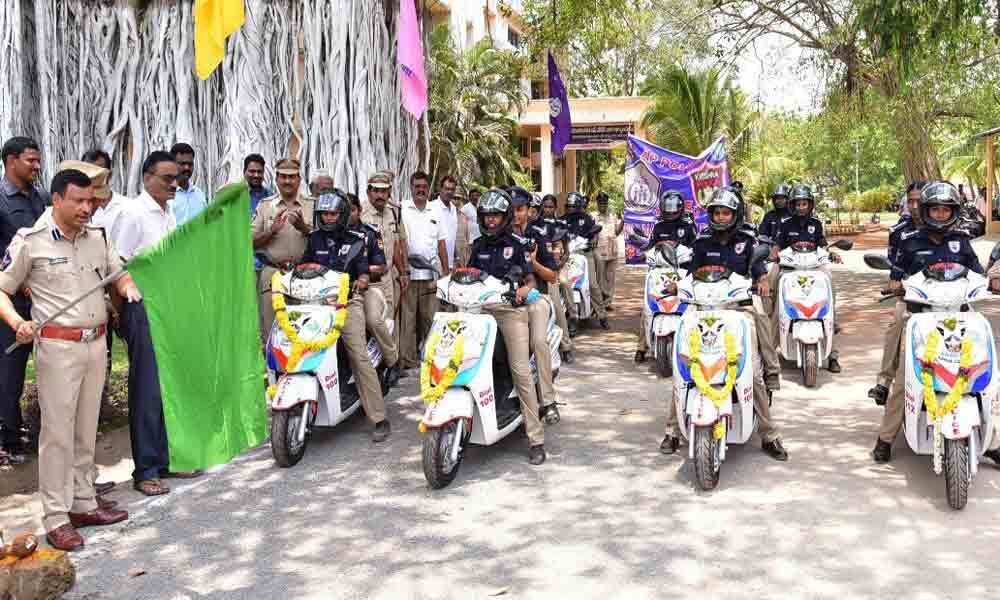 x
Krishna district SP, S Tripati flagging off Sakthi team members who were given vehicles at Machilipatnam on Monday
Highlights

The team members will visit schools, colleges and hostels and create awareness among women on the services of the Police Department and available Acts for women security.

Vijayawada: Krishna district Superintendent of Police S Tripati launched the special police service "Sakthi" teams at SP office in Machilipatnam on Monday. The teams will work exclusively for women protection in the district.

On this occasion, he said that the five Sakthi teams have been set up with each team containing four members for five divisions in the district. He further said that the teams would create confidence among the women and also provide security to them.

The team members have been provided vehicles to reach anywhere in the district. The team members were given special training including karate, yoga, driving and communication skills and they have also knowledge on various women protection Acts.

The teams will move mainly at colleges, hostels, schools and other public places. The team members would create awareness among the women on the services of the police department and available Acts for women security.

The SP said that as many as 22 members have been deployed for the formation of Sakthi teams at first. He also said that the teams take action against the ragging incidents and anti-social elements. The Sakthi teams would conduct patrolling from 7 am to 1 pm and 1 pm to 9 pm in two shifts. The team members also would create awareness on traffic rules, road accidents, cyber crimes and CC TV cameras.

The Sakthi teams would reach to concerned areas based on the complaints which are registered at dial-100 police helpline. He requested the people to utilize the service of Sakthi teams and register their complaints at helpline, if they face any problem.