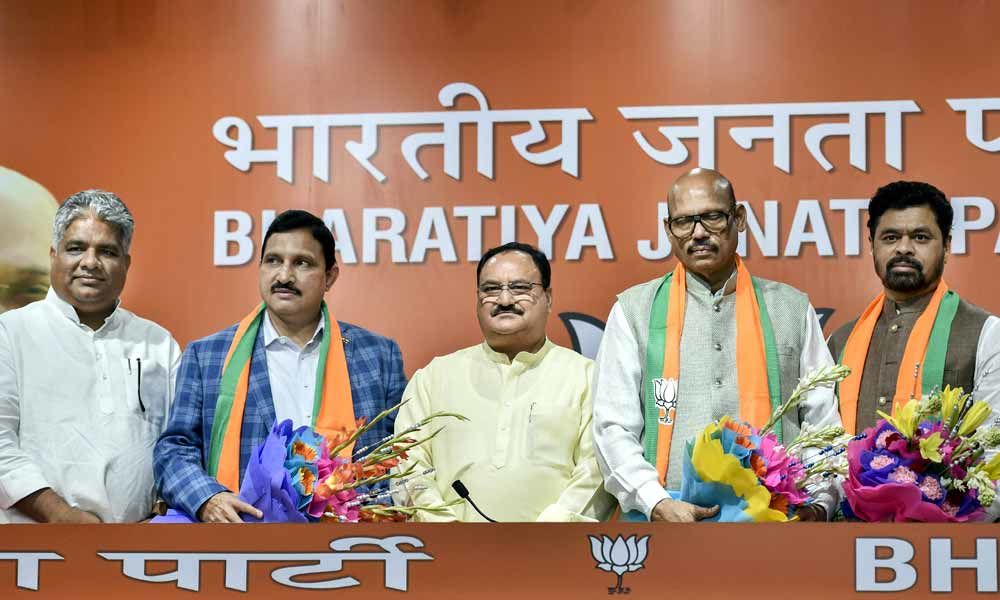 A new kind of political scenario seems to be emerging in the Modi 2.0 regime. In the name of inclusiveness and Sab Ka Saath Sab Ka Saath the BJP has started operation Akarsh.

New Delhi: A new kind of political scenario seems to be emerging in the Modi 2.0 regime. In the name of inclusiveness and Sab Ka Saath Sab Ka Saath the BJP has started operation Akarsh.

The saffron party on Thursday admitted four Rajya Sabha members from TDP Y S Chowdary, CM Ramesh, T G Venkatesh and G Mohan Rao into the party. Y S Chowdary and Ramesh are considered to be leaders who were very close to TDP president N Chandrababu Naidu. In fact Naidu had even sent Chowdary as minister of state in the first NDA government led by Modi. CM Ramesh hade even gone on fast unto death demanding steel plant in Kadapa last year and all these leaders participated in agitations against BJP inside and outside Parliament.

While it wants to wean away as many politically strong Congress leaders as it can in Telangana. It may be recalled that Komatireddy Venkat Reddy is already said to be moving closer to BJP. In Andhra Pradesh it is being said that it has cast its eyes on Kapu and Kamma community in particular. The Kapu leaders in Kakinada held an emergency meeting today. Though they said that they don't intend to join BJP, speculations are rife that this was just a preliminary meeting and soon some of them would join BJP.

Justifying the act of splitting the TDP parliamentary party in Rajya Sabha BJP working president J P Nadda at a press conference said that the BJP believes in politics of inclusiveness, Sab ka Saath Sab Ka Vikas. What was most interesting was that first the four TDP MPs had met BJP National president Amit Shah and gave him a letter asking him to merge the parliamentary party with BJP. Amit Shah then gave his consent and Nadda took that letter to the Chairman M Venkaiah Naidu. The MPs first submitted their letter to Venkaiah Naidu and immediately Nadda and MoS for Home G Kishen Reddy along with Sujana Chowdary handed over Amit Shah's letter to Naidu.

Sujana Chowdary after donning the BJP scarf said that the mood of nation was in favour of BJP and so they also decided to joion BJP to be part of nation building and also to see that Andhra Pradesh gets its due through politics of cooperation not confrontation.

Though speculations have been rife for past few days that Sujana would switch loyalties to BJP, the surgical strike took place when Chandrababu Naidu was on a holiday in Europe. With this move the TDP strength in Rajya Sabha has come down to 2 from six members. One more TDP MP is also expected to join BJP soon.

The BJP is aiming for a majority in the Upper house as the numbers to pass several key bills in the Rajya Sabha elude the saffron party. All eyes are now on the decision of the Chairman of Rajya Sabha. It may be mentioned here that Venkaiah Naidu has always been against defections and he had publicly stated his opinion that the anti defection law should be amended and that anyone who defects would be disqualified. He had also taken some quick decisions in the recent past.