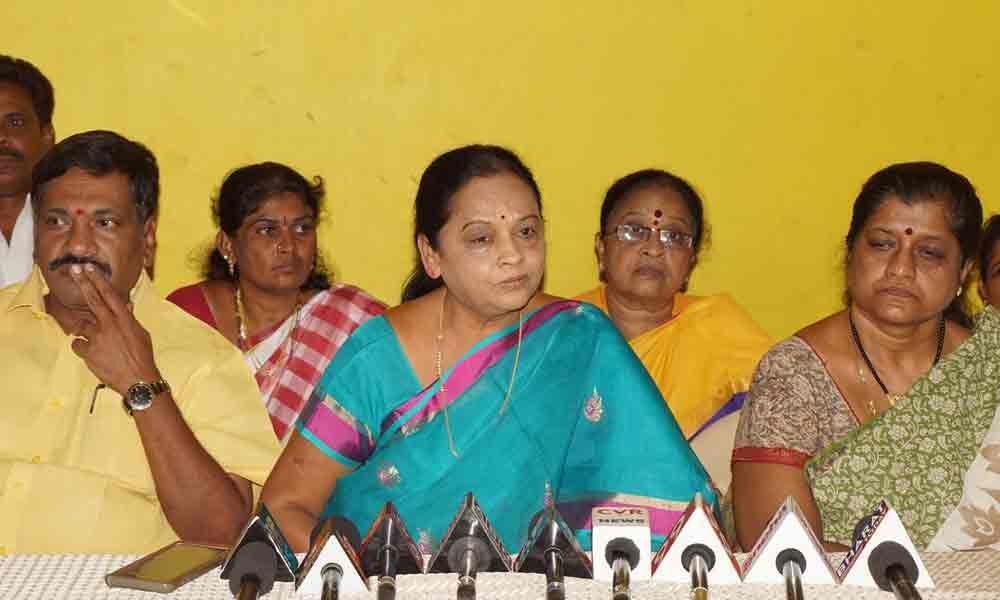 Despite many development and welfare activities in the district, the TDP has witnessed devastating performance in the elections to Assembly and Parliament.

Tirupati: Despite many development and welfare activities in the district, the TDP has witnessed devastating performance in the elections to Assembly and Parliament. Not only party cadre but the people were equally surprised at the poor show by the TDP candidates in all the constituencies with the lone exception of Kuppam where party chief N Chandrababu Naidu has safely came out with a margin of over 30,000 votes.

It was felt that, apart from the unpredicted YSRCP wave, the party's own mistakes were responsible for the defeat of its candidates in several constituencies. Also, the delay in announcing the candidates by the TDP was said to be another negative factor.

In Tirupati, there were many aspirants for the ticket where YSRCP has given clarity on its candidate much earlier. After TDP decided to field its sitting MLA M Suguna again, she faced dissidence from other aspirants and Naidu has to intervene and made all the leaders to fall in line.

Though all leaders have worked for the party the real threat came from Jana Sena candidate Chadalawada Krishnamurthy. He secured 12,315 votes while TDP candidate lost the election with a narrow margin of 708 votes in the hands of YSRCP candidate B Karunakar Reddy.

The votes of Balija community which is predominant in the segment were split between TDP and Jana Sena candidates as both of them belong to same community which helped in a narrow escape for YSRCP candidate. In Srikalahasti, Naidu was learnt to have persuaded sitting MLA Bojjala Gopalakrishna Reddy to contest again till the last moment. But he expressed inability to contest due to his ill-health.

Instead, Bojjala exerted pressure on Naidu to field his son Sudhir Reddy and he succeeded. This has disappointed former MLA and another aspirant SCV Naidu, who left the TDP and joined the YSRCP giving added strength to party candidate B Madhusudan Reddy. Also, it was learnt that TDP candidate has failed to take the cadre along with him and had to face the defeat.

Nagari TDP candidate G Bhanuprakash, the son of former Minister G Muddukrishnama Naidu has fought till the end and has to face a narrow defeat from YSRCP's RK Roja. Here also, the party leadership delayed finalising his candidature and he had little time to focus on electioneering.

In GD Nellore also the TDP fielded former Minister G Kutuhalamma's son A Harikrishna against YSRCP district President K Narayanaswamy. By the time TDP candidate was announced, YSRCP candidate has completed one round of campaigning. Puthalapattu constituency also had the similar situation. Here the TDP announced one candidate first and changed him at the eleventh hour and fielded former MLA L Lalitha Kumari. Though YSRCP also announced a new face, TDP candidate had to concede defeat.

There was much dissidence on Satyavedu TDP candidate JD Rajasekhar, who was chosen in the place of sitting MLA T Aditya. He was replaced because of severe corruption charges against him. Rajasekhar could not gain the confidence of party cadre which resulted in YSRCP candidate K Adimulam's victory.

In Chittoor, sitting MLA DK Satyaprabha expected the ticket again but she was given Rajampet Lok Sabha seat and fielded former MLA AS Manohar by Naidu. Though another former MLA CK Babu has announced his support for TDP candidate, he was defeated by YSRCP's A Srinivasulu, who lost in two elections earlier.

In Thamballapalle, TDP has yielded to the pressure tactics of sitting MLA G Shankar and fielded him again though they got negative feedback on him. As expected, he lost to P Dwarakanath Reddy of YSRCP who contested for the first time. Muslim voters dominated Madanapalle, the YSRCP fielded candidate M Nawaz Basha of that community, who got elected against TDP's D Ramesh.

Though, the candidatures of N Kishore Kumar Reddy, P Nani and N Anesha Reddy were announced much earlier in Piler, Chandragiri and Punganur, they could not face their opponents C Ramachandra Reddy, C Bhaskar Reddy and P Ramachandra Reddy and conceded defeat. In Palamaner, a new face N Venakate Gowda of YSRCP has put everyone in surprise by defeating the Minister N Amaranatha Reddy, who has faced dissidence in the party.