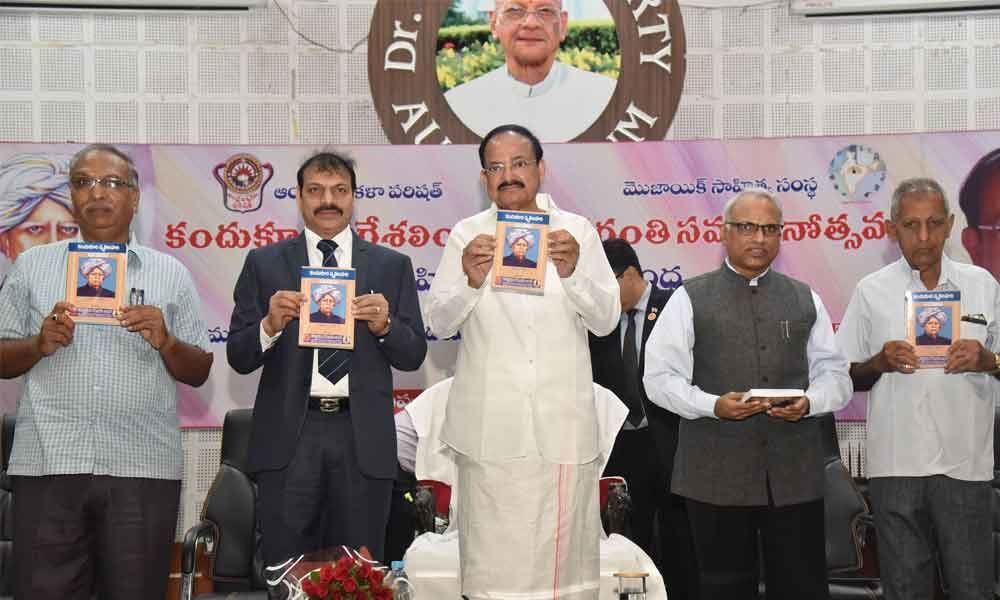 Visakhapatnam: Vice-President M Venkaiah Naidu underscored the need for writers and litterateurs to promote progressive and positive thinking among the people even while holding a mirror to the happenings in the society.

Speaking at an event to mark the conclusion of death centenary of eminent social reformer Kandukuri Veeresalingam which was jointly organised by Andhra University and Mosaic Sahitya Sanstha (MSS) here on Saturday, the Vice-President said that Veeresalingam was forward-looking in his outlook and was ahead of his times.

He was against bigotry and superstitious beliefs and was a strong advocate of widow remarriage, opposed dowry and caste systems as also child marriage. Veeresalingam batted for empowering women through education, Venkaiah Naidu lauded.

Today's writers, authors, poets and columnists have a responsibility in promoting modern and reform-oriented thinking among the people, while preserving our culture and heritage. Merely chronicling or recounting events in a society was not enough. Writers should also point to the foibles of the society and suggest correctives, he added.

Expressing his anguish over instances of social and gender discrimination, he called upon writers to be in the forefront in the fight against social evils and in bringing about an attitudinal change among the people. "We must work for promoting cohesion in the society and not confrontation", Venkaiah Naidu said.