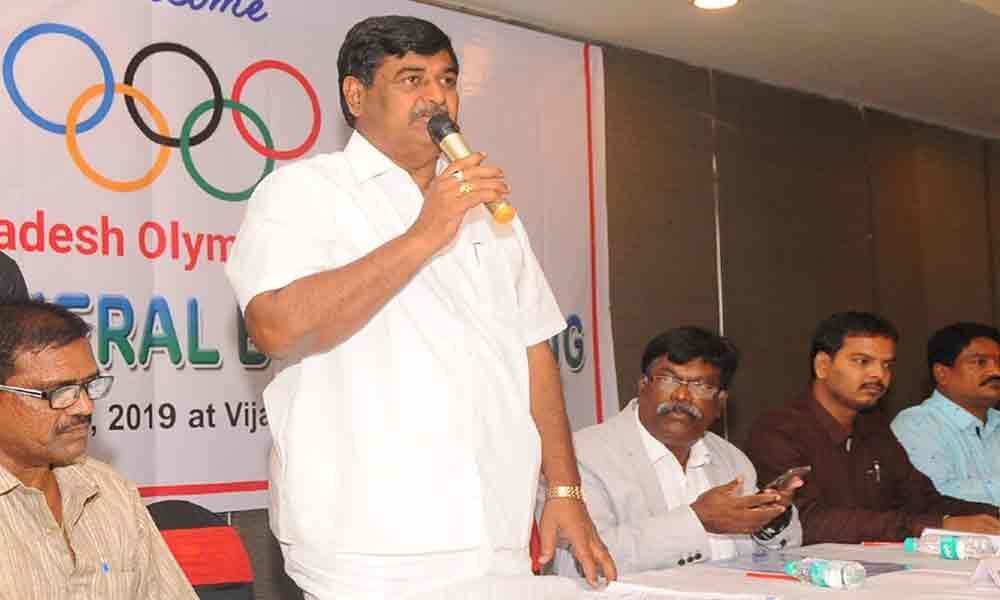 The meeting also elected K Purushotham as the secretary general, K Sashikanth as the treasurer and Badeti Venkataramaiah as the senior vice- president.

The meeting also elected K Purushotham as the secretary general, K Sashikanth as the treasurer and Badeti Venkataramaiah as the senior vice- president.

Speaking to the mediapersons, newly elected secretary general Purushotham said that the association in the next four years will strive for the development of the athletes, conducting significant events in the State and prepare sportspersons for the international meets.

"We want to keep aside all the court cases and concentrate on developing sports in Andhra Pradesh in a transparent manner," he said.The meeting also formed eight sub-committees to look in various aspects such as finance, infrastructure, affiliations, ethics, dispute, legal, games, technical and sports development.

Purushotham said that the change of power in Andhra Pradesh has come as a shot in the arm for the sports fraternity. "The new Chief Minister Jagan Mohan Reddy is keen on transforming AP into a sports-loving State. In the next meeting will discuss the preparation for the National Games to be held in Goa in October."

He said an action plan would be evolved as to how to prepare AP teams for the mega national event by organising coaching camps in different districts. He also said that Andhra Pradesh would get a new Olympic Bhavan in Guntur and efforts will be made to shift the Sports Authority of Andhra Pradesh from Vijayawada to Guntur.

New APOA president Dharmana Krishna Das said he was associated with volleyball for more than 25 years and he was a national spiker. 'I love sports and games. As I was an average student, I got my job in sports quota. I will strive hard to bring in transparency and development in the sports arena," he added.

He further said under the new government, efforts will be made to lay synthetic tracks and construct indoor stadiums with dormitories in all districts."We aim to spread sports culture among youngsters across the State," Arjuna awardee and former Indian volleyball coach A Ramana Rao said.

He suggested to the new body to announce the best association award every year as a measure of encouragement to the best medal-winning association in the State.