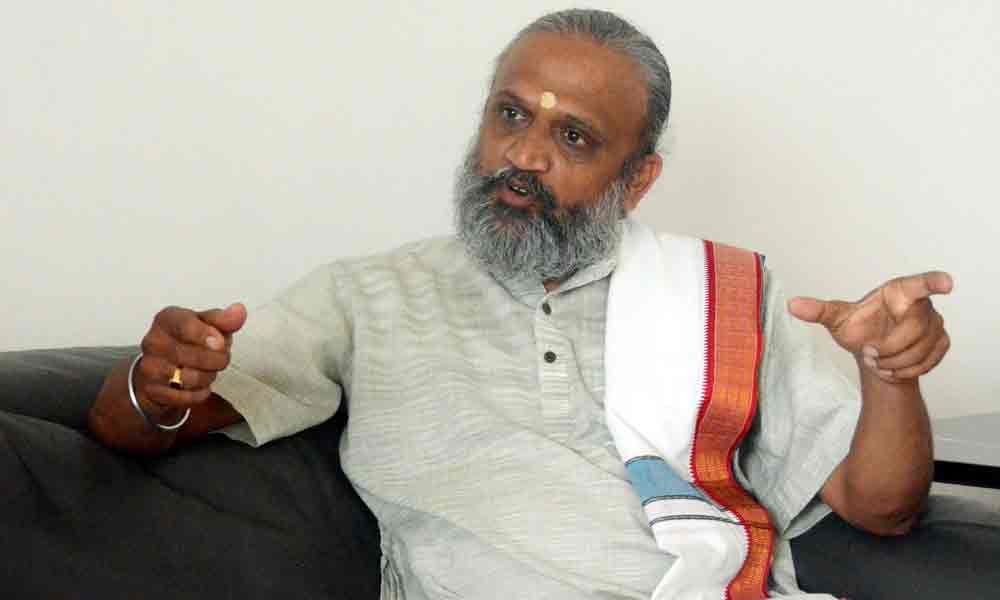 There is a huge difference between liking what you do and doing what you like. Bengaluru-based yoga trainer with Art of Living Prashanth V Kumar chose the latter.

Visakhapatnam: There is a huge difference between liking what you do and doing what you like. Bengaluru-based yoga trainer with Art of Living Prashanth V Kumar chose the latter. Twenty-five years ago, when he left a plush marketing job he did not have any clue about how yoga and meditation would aid in transforming his life.

In an interview with The Hans India, he talks about his association with the ancient practice and how it guided him to lead a much better life, increasing awareness among youths on the benefits of yoga and the need to lead a stress-free life.

"I got into a field that was highly stressful. Though I was doing my job well, I was not happy as I had a push to stretch more. This eventually affected my health and well-being. At the age of 28, I was already a wreck health-wise and could not bend anymore," recalls Prashanth. That was when he introduced himself to yoga, a discipline that he later embraced as a full-time profession.

After doing a course in Art of Living (AoL), he opted to be a faculty with AoL training volunteers, teachers and students in advance meditation programme, yoga, 'cooking well' and 'living well,' among a plenty. "After making yoga an integral part of my life, my health has drastically improved.

That's when I realised that I should introduce a greater number of people to the discipline and help them lead a stress-free life," says Prashanth, who is now a senior faculty of AoL and founder of Bharathiyata Anusandan Kendra Trust (BAKT). The trust is largely dedicated to revive the artisan economy and bring back the cultural glory of the nation, tapping the potential of artisans across the country.

The yoga trainer observes that several youngsters were taking to yoga discipline these days as they realise its holistic benefits. "Even in a plenty of online yoga and pranayama courses, youth dominates the subscribers' list which indicates a healthy trend. In Karnataka, yoga is being made mandatory in educational institutions," says Prashanth, who is in Visakhapatnam to conduct yoga routine on International Yoga Day at Port Stadium.

He recommends 30 minutes to an hour-long yoga and pranayama session to enjoy health benefits as the regimen is considered an effective tool and a solution to complicated lifestyles and the disorders that come along with it.