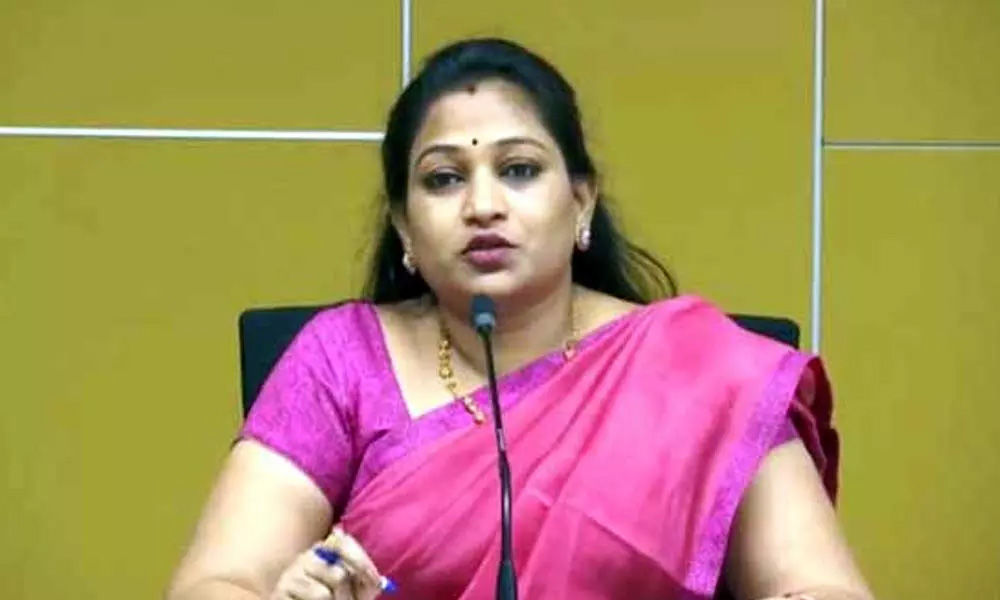 Amaravati: Telugu Mahila State president Vangalapudi Anitha on Wednesday accused the YSRCP MPs, ministers and MLAs of misusing the police and government machinery to create a fear psychosis among the people amidst the ongoing panchayat elections in the State.

Anitha said that the YSRCP MPs were solely interested in resorting to cheap election gimmicks in Andhra Pradesh rather than using their good offices to bring benefits to the State. There were no funds for Polavaram, metro rail projects, etc in the State. But MP Vijay Sai Reddy preferred to make a visit to Nimmada only with the intention of creating tension there.

Addressing a press conference here, Anitha found fault with the State Police for filing false cases against the TDP leaders whenever Vijay Sai Reddy would make his politically provocative visits to different places. The same happened in Ramatheertham and now in Nimmada. Atchannaidu has not given any threats but only appealed to the rival candidate to think while leaving the final decision to him only. Based on these comments, the police filed a wrong case and arrested the TDP leader.

Anitha also objected to the way TDP national spokesperson Kommareddy Pattabhi was attacked and injured just for his constructive and well-informed criticism of the government's corruption and illegalities. No action was initiated against the culprits in the attack till now. The police bosses would consider leaving their khaki uniform and start wearing the YSRCP blue dress instead. The Chief Minister was misusing the police force as if he was paying their salaries from his own pocket. Jagan should learn from former Chief Minister Chandrababu Naidu on how to run the administration for the benefit of one and all in the State.

The TDP leader deplored that while NTR and the TDP brought respect to the Telugu people, the YSRCP MPs and Jagan were mortgaging the welfare of people at the feet of the Delhi leaders. Jagan met the Prime Minister and Amit Shah several times when the people innocently believed that Andhra Pradesh would get funds and projects. But it is now becoming clear after the Union budget that all those visits of the Jagan were only meant for getting relief from his own personal cases. Because of the YSRCP MPs' miserable failures, the State has become orphaned by the Central government with no industries, no incentives and no funds for the backward regions, she said.