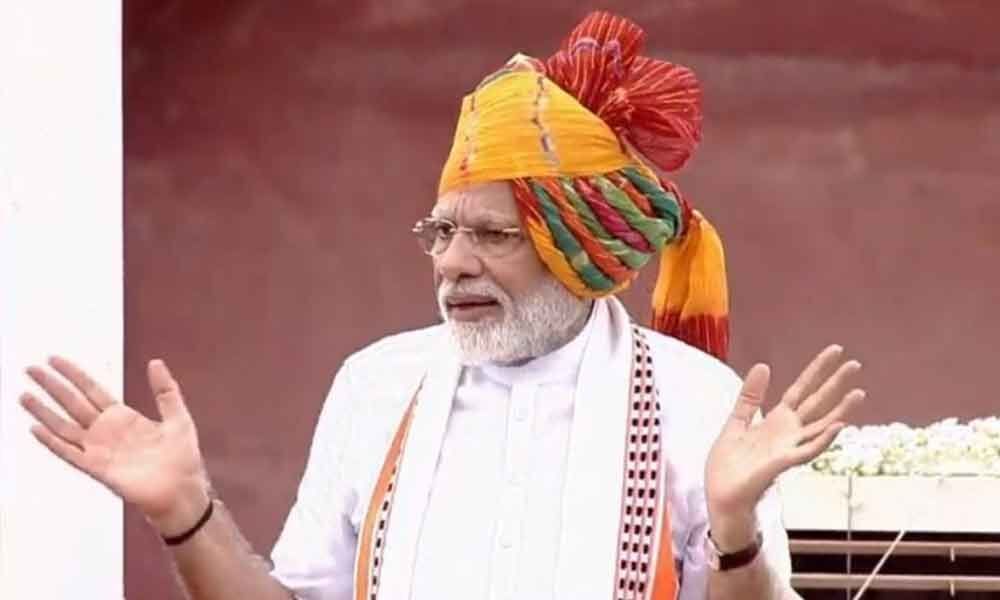 In his I-Day speech, PM Modi pushes for investment-led growth

New Delhi: Amid a widespread slowdown in the economy, Prime Minister Narendra Modi on Thursday committed to a five-year vision of investment-led growth, saying a massive Rs 100 lakh crore will be spent on developing infrastructure that will help in achieving the target of $5 trillion economy.

Exuding confidence of achieving the target of $5 trillion economy, Modi in his address to the nation from the ramparts of the Red Fort here on the 73rd Independence Day, said fundamentals of the economy are strong and a stable government coupled with predictable policies can become a catalyst including in attracting other nations to invest in India.

"We are targeting a $5 trillion economy. Many think it is difficult. But if we don't do difficult things how will we progress?" he asked.

"It took 70 years to reach $2 trillion economy size, and in the last one year alone we added $1 trillion. And this gives us confidence that in the next 5 years, we can take it towards $5 trillion," the prime minister said.

This goal can be achieved through investing more, particularly, in infrastructure, Modi added.

"We have decided to invest Rs 100 lakh crore in developing world-class infrastructure in the country. This investment will be in building roads, railways, airports, ports, hospitals and educational institutions," he said.

The country's economic growth accelerated in the first few years of Modi 1.0 regime, even breaching 8 per cent in 2016 and 2017, and the government was able to push through major reforms, including the introduction of a harmonised goods and services tax.

But the growth rate has since then slowed to a five-year low of 5.8 per cent in January-March 2019, consumer confidence has waned, and foreign direct investment has plateaued.

The auto sector is facing the worst crisis in about 20 years and reports suggest job losses in thousands. In the real estate sector, the number of unsold homes has increased while fast-moving consumer goods (FMCG) companies have reported a decline in volume growth and lending to job creating MSMEs (micro, small and medium enterprises) by banks has actually slipped.

When the government needs more money, tax collection has grown by just 1.4 per cent. Entrepreneurs have voiced frustrations with regulation and the high cost of capital.

The Prime Minister, however, sought to allay concerns saying the fundamentals of the economy are strong, with low inflation and a potential to boost exports.

Modi said he has scrapped obsolete laws to make it easier to do business in the country and is now targeting a position in top 50 nations on the World Bank's Ease of Doing Business ranking.

He, however, wanted businesses to shun cash and go accept only digital payments in an attempt to bring transparency and root out black money.