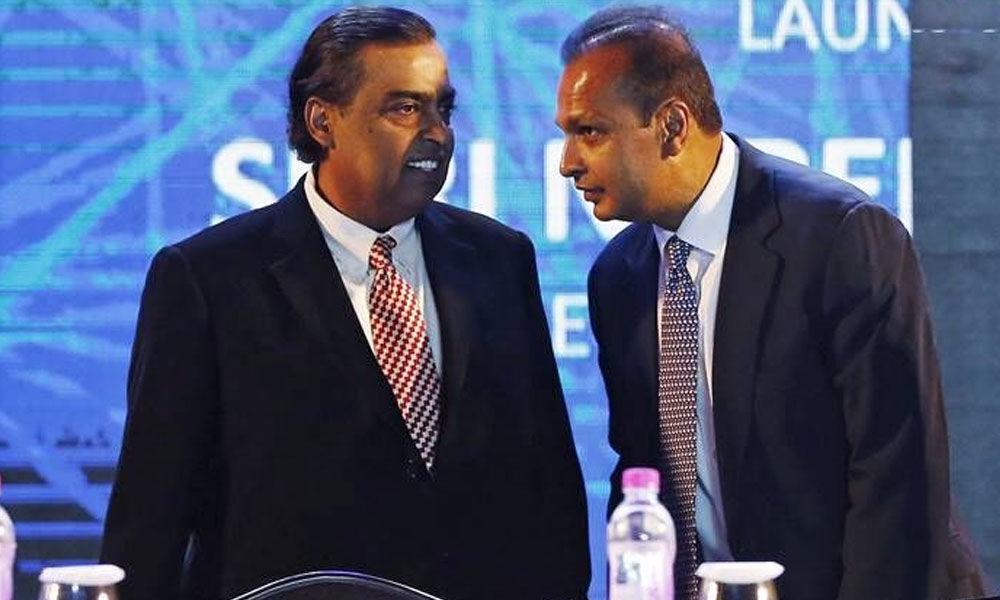 New Delhi: Richest Indian Mukesh Ambani saving younger brother Anil from jail by helping his struggling telecom firm repay Swedish supplier Ericsson may be a watershed moment in the relationship between the two brothers, who have in the past publicly bickered and fought court cases against each other.

Industry watchers said the last-minute bailout may mark the beginning of a more harmonious relationship between the two brothers after more than a decade of strained ties. Anil, who along with his wife and children was photographed enjoying the recent weddings of Mukesh's children, thanked his elder brother and sister-in-law for "standing (by him) during these trying times, and demonstrating the importance of staying true to our strong family values by extending this timely support."

"I and my family are grateful we have moved beyond the past, and are deeply grateful and touched with this gesture," he said on Monday after getting Rs 458 crore from Mukesh that he used to repay dues towards Ericsson. The tone of the statement was "reconciliatory", said a senior industry official who has closely followed the business journey of the two brothers. "This could well be a new beginning for them," he said.

A source said the two brothers could even work more closely in the future. "It may well turn out to be a watershed moment in their relationship." Both the groups did not immediately reply to e-mails sent for comments. Anil's heavily debt-laden Reliance Communications made a Rs 550-crore payment, including interest, to Ericsson just a day before the expiry of the deadline set by the Supreme Court to clear dues or face a three-month jail term.

Soon after making the payment, RCom announced the termination of a Rs 17,000-crore deal to sell telecom assets like spectrum, fiber and tower to Mukesh's Reliance Jio, citing delays in approvals from the government and lenders.

Those assets will now be sold in bankruptcy proceedings where Jio is likely to be a prominent bidder. The two brothers had fought a bitter public battle after their father Dhirubhai died in 2002 without leaving a will.

Three years later, they split the conglomerate with the elder brother getting oil and petrochemical business and Anil winning control of newer business such as power, telecom, and financial services.

The two brothers, who prior to the patriarch's death served as executives at their father's company, got assets with almost equal value.

But the bickering did not end with the split as Anil took elder brother to court for failing to honour a contract for the supply of natural gas to his power plants. The case went up to the Supreme Court which ruled in Mukesh's favour. In 2008, Mukesh cited right of first refusal to stall a merger of Reliance Communications with South Africa's MTN to take on the competition.

Fortunes of the two brothers have since splitting their father's Reliance empire seen a dramatically contrasting path -- while older brother's oil and petrochemicals business flourished, Anil's telecom and power businesses strained under massive debt as it invested billions to expand his portfolio.

But unlike Mukesh who had a cash cow in an oil refinery to finance growth, the rising cost of servicing debt and intense competition killed his business. The net worth of Anil, who was listed by Forbes magazine in 2008 as the world's sixth-wealthiest person, has shrunk to about $300 million from at least $31 billion in 2008 based on the current foreign exchange rate, according to Bloomberg data.