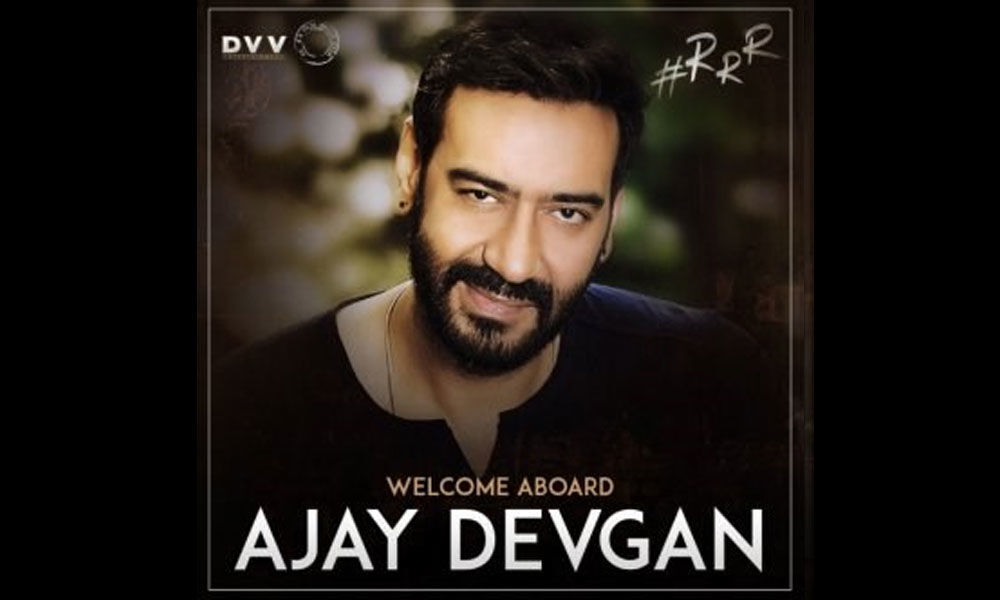 The makers of RRR Movie just confirmed that superstar Ajay Devgn is on-board to play a pivotal role in the film, which will mark his Telugu debut in SS Rajamouli helmed project.

The makers of RRR Movie just confirmed that superstar Ajay Devgn is on-board to play a pivotal role in the film, which will mark his Telugu debut in SS Rajamouli helmed project.

After confirming Alia Bhatt being on-board, the makers just confirmed that Ajay Devgn is also part of the ensemble.

The official handle of RRR movies tweeted, "@ajaydevgn Sir, we are grateful to have you on the board. It's a pleasure that you play a prominent role in the film. Can't wait! #RRRPressMeet #RRR @ssrajamouli @tarak9999 #RamCharan @dvvmovies @RRRMovie"

RRR is an upcoming Telugu period action film, which is scripted and directed by S. S. Rajamouli. It stars N. T. Rama Rao Jr., Ram Charan, Alia Bhatt and Ajay Devgn also onboard. The film is made on a budget of 300 crore.

RRR will be a fictional story set in 1920s pre-independent era and it will be based on few years in the lives of two real heroes and well-known revolutionaries — Alluri Sitarama Raju and Komaram Bheem.

Jr NTR will be seen as Komaram Bheem and Ram Charan will be playing Alluri Sitharama Raju.

RRR marks the first collaboration between Jr. NTR and Ram Charan. While this film will mark the second collaboration of Ram Charan and Rajamouli, the Temper actor has worked with the filmmaker in three films.

The film is slated for July 30, 2020 release in ten Indian languages.