April going to be treat for Telugu movie audiences 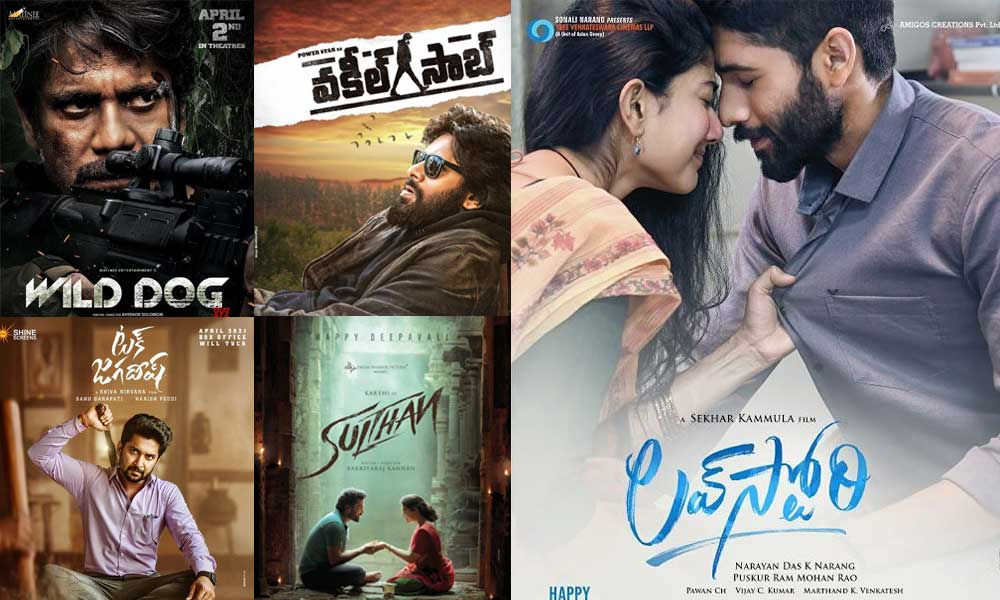 April going to be treat for Telugu movie audiences

Telugu cinema had seen some good results in the box-office after the reopening of theatres. March has also seen the likes of "Jathi Ratnalu" and "Rang De" light up box office with some impressive numbers. In general, the film makers take a step backward to release the films in April and plan them for a summer release but due to Covid-19, the schools have been closed and in this year, April is all set to welcome some interesting movies for our entertainment. Bringing the summer tradition a month ahead of, here is the list of 6 exciting Telugu movies releasing in April this year.

"Wild Dog" is an upcoming action thriller film written and directed by debutant Ashishor Solomon starring Nagarjuna Akkineni, Dia Mirza, and Saiyami Kher. This will be the debut for Dia Mirza in Tollywood. The film is produced by S. Niranjan Reddy and K. Anvesh Reddy are bankrolling the film. The film includes many terrorist incidents happened in India, including the Gokul Chat bomb blast in 2007. The film is scheduled to hit the screens on April 2.

The teaser and trailer released by the production house created a lot of buzz in the film circles. Nagarjuna is playing the role of NIA cop in the film. The promotions of the film are kicked off and on full swing.

"Vakeel Saab" is an upcoming legal drama film directed by Venu Sriram and produced by Dil Raju and Boney Kapoor. This film is a remake of the Hindi film "Pink" which was released in 2016, it stars Pawan Kalyan, Shruthi Haasan, Anjali, Nivetha Thomas, Ananya Nagalla and Prakash Raj. This will be the re-entry film of Pawan Kalyan after a sabbatical owing to his political campaign in the 2019 Andhra Pradesh Legislative Assembly election. The film was postponed due to the Covid-19 pandemic and now it is scheduled to be released theatrically on April 9.

The trailer which was recently released in some theatres shows the expectations on the film. Pawan Kalyan was portrayed as an advocate in the film. S Thaman is composing songs and BGM of the film. The promotions of the film have been started recently and the film team is planning a pre-release event to create much more hype on the film.

"Love Story" is an upcoming romantic drama film written and directed by Tollywood classic director Sekhar Kammula. It stars Naga Chaitanya and Sai Pallavi in the lead roles. Narayan Das K Narang is bank rolling the the film. Naga Chaitanya will be seen talking in Telangana dialect in the film where as Sai Pallavi's characterisation could spring a surprise for the audience. This film will be the second collaboration of Sai Pallavi with Sekhar Kammula after "Fidaa". "Love Story" is scheduled to release on April 16.

The songs composed by Pawan Ch who was the student of Ar Rahman's Music institution KM Music Conservatory were trending in social media. Even the posters and dance by Sai pallvi for "Saranga Dariya" are also creating excitement in audiences to watch the film.

"Sulthan" is an upcoming action thriller film, written and directed by Bakkiyaraj Kannan, and produced by S. R. Prakash Babu and S. R. Prabhu. The film stars Karthi and Rashmika Mandanna,which will be debut for the lead actress in Tamil film industry. Napoleon, Lal, Yogi Babu and Ramachandra Raju play supporting roles. The film's music is composed by Vivek-Mervin with background score composed by Yuvan Shankar Raja. The film is scheduled to release on April 2.

The movie has created an excitement after the trailer of the film was released. Karthi plays the role of a robotic engineer in Mumbai. The film is based on the journey of a hero with 100 men who are quite contrary to his character. The team started its promotions in Tamil and Telugu.

"Tuck Jagadish" is an upcoming action entertainer directed by Shiva Nirvana, and produced by Sahu Garapati and Harish Peddi. The film stars Nani, Ritu Varma, Aishwarya Rajesh and Jagapathi Babu in prominent roles. This is the second collavboration of Nani with Shiva Nirvana after "Ninnu Kori". The film is scheduled to release on April 23.

The film's music is composed by S Thaman and the songs which were released were hitting views in YouTube and other social platforms. The pre-release event of the movie was done recently. The movie created hype from the first look itself. Nani will be seen in an out and out action entertainer after long time.