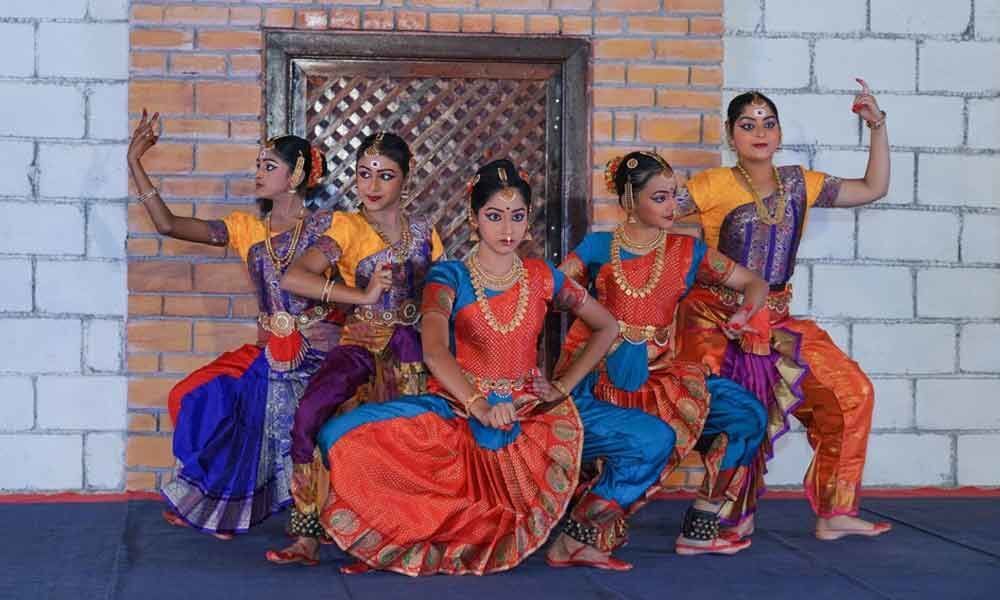 Hyderabad-based Jyothi Reddy, founder and director of ‘Jyothi Kalakshetram’ dance school, has come a long way since she first began to learn Kuchipudi dance at the age of 32

50 students participated, and an elaborate repertoire was readied for the event showcasing the calibre of the team.

The first item Shri Ganapati Atharvashirsha in Ragamalika written by Atharva Rishi. It is customary to invoke the name of Lord Ganesha before beginning anything.

Students gave a delightful opening with this item for which the music is rendered by Padmashri Ella Venkateswara Rao. The first item pays a deep homage to Lord Ganesh, as the verses say - the Lord of the Deva-Gana, you are the first facet of the Bramha-Tatva to arise, you have alone created this Entire universe. You alone can maintain this universe. You are indeed the all-conquering supreme Lord. Indeed, you are the "Atma".

The next items titled "Pushpanjali" in Nattai Raagam is made up of two words. Pushpa – flower and Anjali - folded hands to show respect.

The dancer holds flowers to offer prayers to the Trinity of God's, Goddesses, AshtaDikpalakas and scholars in dance. Pushpanjali is an offering of flowers to Indian Gods.

It is the salutation to the Lord of dance Nataraja, the guru, the musicians and the audience. This piece was followed by "Mahaganapathim". This beautiful piece, composed by the MuthuswamyDikshitarwas well performed by Anjani, Ashwini, Deepthi, Praveena, Rinku, Soujanya, Surekha, and Suvarchala, students of Jyoti Reddy.

Sloka is a powerful prayer, which conveys the dignity and the omnipotence of God. Sanskrit slokas describe God in different forms and their celestial powers. Students, who sincerely, recite these slokas are said to attain a steady and peaceful mind.

The tiny tots of Jyothi Kalakshetram did three slokas interspersed with a few fundamental steps, hand gestures(mudras), foot positions(pada bedhas), which are typically taught at the beginning of a student's training.

What followed was Shambu Natanam Stotram, which has no words with Kombu or Kaal. This was sung according to the laya/thala of Shiva's cosmic dance. Students presented this energy filled item in all earnest before rendering some staple Kuchipudi Shabdams.

First was Manduka Shabdamin Mohana based on Gajendra Moksham from Vishnu Puranam. Rajashri Shabdam is in praise of King Pratap Singha, who ruled Thanjavur in the early 17th century. This number describes the great qualities of his head, heart, wealth and might.

KalingaNarthana Thillana in Gambheera Nattai was also a part of the elaborately planned event. "Kalinga Narthana" literally means "Kalinga Dance" in Sanskrit, and it refers to a popular mythological story in which the God Krishna, as a young boy, danced on the hoods of the serpent Kaliya (aka Kalinga) to stop him from poisoning river Yamuna.This was energetically done by Tharishya Reddy.

Jathiswaram in aatana was a tapestry of 'Tune Beats' and 'Melodious' notes which are given visual form in this item of pure dance(Nritta).

There are no words to convey any meaning in this item but attractive movements of the eyes, eyebrows, neck and foot work patterns are used to create new world of ecstasy and ethereal existence.

Tarangam marks the climax of a traditional Kuchipudi recital. This item ends with a display of exquisite virtuosity as the dancers execute intricate footwork patterns by dancing on the rim of a brass plate and coordinate them with complicated rhythmic patterns.

Jyoti Reddy's students put forth a major performance proving once again the immense possibilities of Sadhana. The event in traditional style had live orchestra excellently led in Nattuvangam by RLV Hemanth Lakshman.

On completing one-year Jyoti Reddy shares, "I had to start

from scratch, and this one year has been a learning for me too. Along with fine tuning my performances, I also learnt to teach and train my students.

All of them began from basics, and when they reached a certain level, categorised them into groups, each efficient enough to perform 10 items."

50 per cent of my students are from the economically challenged background. Jyoti takes just nominal fee or no fee, to support

and encourage people from all walks of life.

Apart from dance she also imparts them with knowledge of talam, nattuvangam, and teaching skills too based on their age. "I give opportunities to all my students in all my programs to perform," she states.

Her plan is to be the world's best school in Kuchipudi. "All my students will stand as good dancers and I want to start a branch in my native place Vajjavari Kandriga near Tirupati."