Ode to a dance tradition 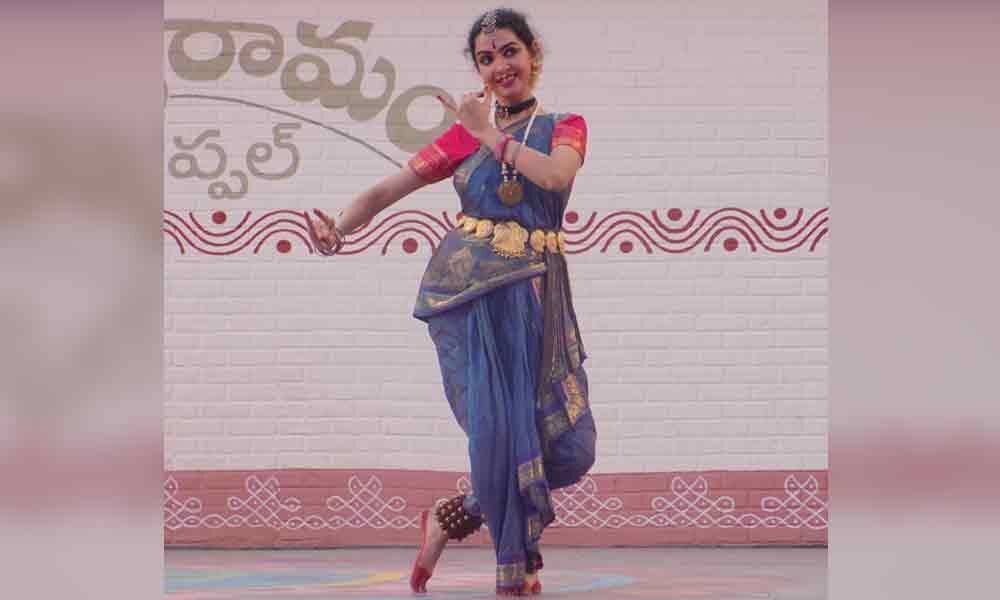 The recently opened new Shilparamam at Uppal in Hyderabad has caught on excellently. The huge crowds attending are testimony to its success.

The recently opened new Shilparamam at Uppal in Hyderabad has caught on excellently. The huge crowds attending are testimony to its success.

The weekend featured a Kuchipudi group and solo presentations by Sinjini School of Arts headed by Sindhuja. Her students Harshini, Sahasra, Hansini, Rhea, Sindhura and many others gave a well coordinated performances displaying their talent.

Young Guru Sindhuja deserves kudos for her meticulous grooming of the students. Not only is she an exceptionally talented artiste but she is also training a new generation of students to cherish, display and carry on the glorious heritage of the Kuchipudi art form.

The students began with a slokam followed by Vinayaka Kavtuvam in Ragamalika praising Lord Ganesha and extolling his various virtues and attributes.

He is Parvati's beloved son with an elephant's head. The remover of all obstacles is praised by and prayed to by all.

This well choreographed group item was followed by an extract from Bhama Kalapam. Conceptualised by Siddhendra Yogi, Bhamakalapam is the most popular and staple composition in Kuchipudi.

An extract of the Pravesa Daruvu where Satyabhama introduces herself as the most attractive, beloved wife of Lord Krishna and the honured daughter of King Satrajith.

She laments the separation from her husband Krishna as choreographed by renowned Guru Vempati Chinna Satyam was presented by Sindhuja. She gave a sprightly interpretation by her expressive Abhinaya with matching Nritta.

She perfectly captured the proud mien of Satyabhama who is at the same time very affectionate to Krishna also. This melding of contrasting moods was effortlessly depicted.

Ramayana Shabdam is the story of Rama from his birth to coronation as King of Ayodhya describing each event in a line. It was presented in a Shabdam format by the students in Mohana raga.

A Tarangam composed by Narayanateertha in Mohana was next. Deeds of young Krishna and tales of how he protects his clan and the world from all kinds of troubles is showcased.

Highlight is the episode of lifting Govardhana mountain and dancing on the edges of a brass plate. Balance and rhythm were elegant, graceful and entrancing.

The choreography for this piece was by Dr Yashoda Thakore. The stances elucidating the story were eloquently presented in " Koluvaitiva", a group item. Lyrics for this popular song are by Devulapalli Krishna Sastry.

Next was the popular Annamacharya keertana "Muddugare" where Krishna is compared to the various gems like a pearl playing in Yashoda's front yard, coral like the shade of Rukmini's lips, as a diamond while slaying enemies.

In Kuranji raga the piece was performed by Sindhuja and group. It was interesting to watch the successive stanzas alternated by students and the teacher."Sankara Srigiri " composed by Swathi Thirunal is in Hamsanandi. The God of Chidambaram is dancing with joy, it's a sight to behold.

With gods, sages watching and his bhoota ganas joining, Lord Shiva dances to perfect pitch and rhythm. The choreography for this was a masterpiece of controlled movement majestically painting in fluid sculpturesque images the dancing god's remarkable poses.

Swathi Thirunal Tillana in Dhanasri, the concluding item showcased the technique of Kuchipudi through abstract dance movements to the lyrics in praise of Padmanabha Swamy.