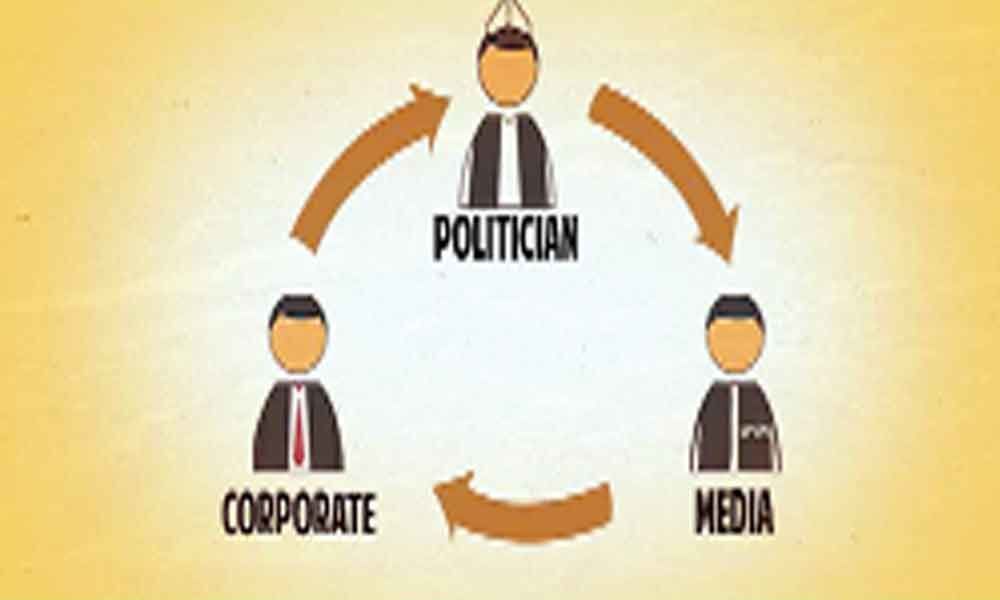 At a time when the society and Indian politics as a whole are going through a rapid change, it becomes indispensable to have a close look at the...

At a time when the society and Indian politics as a whole are going through a rapid change, it becomes indispensable to have a close look at the arrangement that is governing the Indian politics. Without any second thought, the present-day political system has been revolving around the cronyism — crony capitalism and crony journalism.

In a sense, cronyism can be understood as a combination of nepotism associated with concrete preferential treatment. The most widely accepted definition of cronyism is — it is the practice of partiality in conferring jobs and other compensations to friends and relatives, especially in politics and between politicians and supportive organisations.

In the Indian setting, various political parties do contest in the elections. Though it is not openly admitted by any political party, the utilisation of cash in the whole election process enormously exceeds the actual limit imposed by the Election Commission of India.

The amount being seized by various agencies soon after the announcement of election schedule for General Elections-2019 is the clear evidence to prove this argument.

In order to survive in this game of superiority, every political party needs to be funded adequately with cash in leaps and bounds. This, in a nutshell, means that the political parties need funds to patronage the contenders to fight elections.

Palpably, the contenders of the elections and the business tycoons looking for return favours would fund the political parties. This could be viewed as a cyclic process wherein business conglomerates need political support to get contracts, and political parties need funds for contesting elections.

Here it should be understood that the money being funded by the businessmen is obviously the public's own money. Also, no businessmen ever fund any political organisation just like that, without seeking return favour.

On the other hand, if we take the ownership details of any media in India, most of the organisations are owned by the business conglomerates that are into various other businesses or who are into politics as such. Strikingly, almost all television channels or even the newspapers have taken a lean towards one or other political party. This means each and every political party has its own mouthpiece.

It is a matter of fact that most of the Indian political parties have also started their own newspapers, trying to propagate their political viewpoints among the masses. Besides, these political parties, especially the regional parties, also own television news channels. They not only broadcast their views but also promote propaganda.

In the best interests of society, cronyism is good for nothing. It ultimately breeds corruption in society. As well, it results in the empowerment of a few people to have control over the country's economy. Such a state is effectively identified as 'Oligarchy' — defined as a political and economic structure that is characterised by a small group of people exercising great power and control over a country's economy. Such a situation is not just hypothetical — there are many previous instances.

For example, soon after the disintegration of the Soviet Union, there was an upsurge of a group of very rich people who were labelled as oligarchs or kleptocrats. Their accumulated huge sums of money were attributed to the sale of government-owned assets at throwaway prices to the companies owned/controlled by this group of people.

In concluding words, it can be rightly said, that of the four pillars of democracy, the media serves as the fourth pillar while judiciary, executive, legislature are the remaining three pillars. Beyond doubt, the ethical media which is free from crony journalism would, for sure, has the capability to change the entire system in India — it is possible only with the practice of journalistic ethics in true letter and spirit.