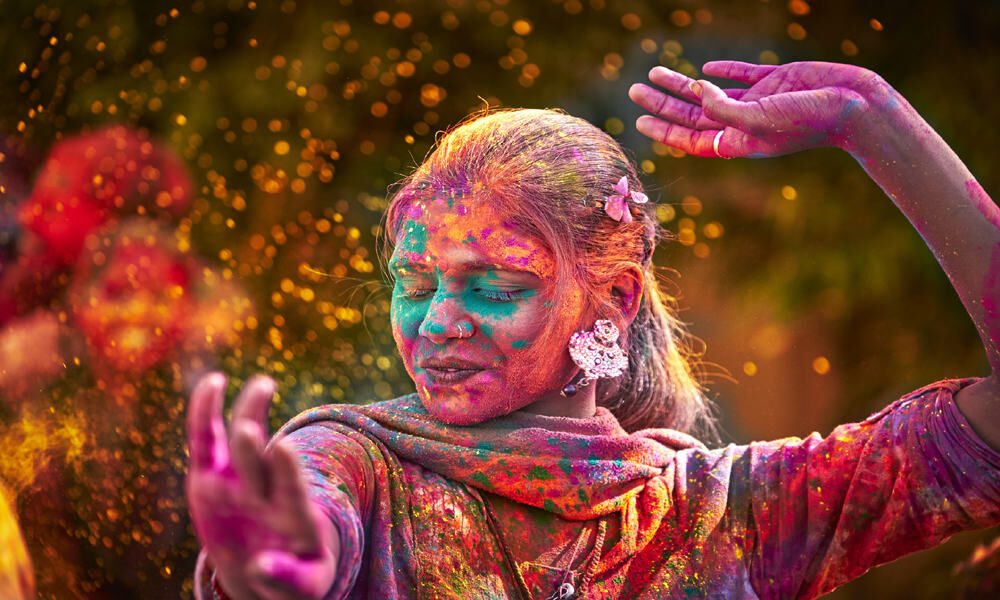 Holi signifies boundless happiness. As we enjoy such sacred festivities, we should remember that, in reality, they are meant to remind us of the inner bliss and oneness that are our inherent nature and are the very essence of life.

Holi signifies boundless happiness. As we enjoy such sacred festivities, we should remember that, in reality, they are meant to remind us of the inner bliss and oneness that are our inherent nature and are the very essence of life. When everyone's bodies and faces are smeared with colours, all external differences disappear; everyone looks the same. True happiness and love arise only when all the boundaries created by the mind vanish.

There are several legends associated with Holi. Foremost is the story of Prahlada. Even as a little boy, Prahlada was fully devoted and surrendered to the Lord. However, his father, the demon king Hiranyakashipu, in his egomania, openly declared himself to be a God. Hiranyakashipu issued a decree that no one other than himself could be worshiped. He demanded that everyone chant only his name. Regardless, Prahlada continued his innocent prayers and devotion to Lord Vishnu. Infuriated, Hiranyakashipu decided to have Prahlada killed. He devised many plans to do so, including boiling him in oil, trapping him in a room of venomous snakes, having him trampled by elephants—even having his own mother poison him. Prahlada miraculously escaped all these plots unharmed, and his devotion only grew.

At one point, Hiranyakashipu asked his sister Holika to enter a blazing fire with Prahlada in her lap. Holika had received a boon making her fireproof. But owing to Prahlada's innocent faith and one-pointed devotion, he remained unscathed. Holika, on the other hand, paid for her heinous deed by burning to death. Thus, today, people re-enact this event with Holika dahanam.

The tale of Hiranyakashipu's rise and fall has an inner meaning: When a leader becomes selfish, self-centred and drunk with ego, he forgets that he is, in fact, only a limited human being. We should never forget that, in the vastness of the universe, all beings, including humans, are nothing but tiny, little creatures. The story reminds us that when we lose our humility before the all-powerful divinity, the law of karma will eventually come to correct us. This holds true not only for leaders, but for everyone. Hence, we should always remember that we are all interconnected; the ripples of each of our actions—good or bad, selfless or selfish—will go on to affect our family, our village, our State, our nation, and onto the entire world. Ultimately, they will return to us.

On Holi, you can fearlessly and lovingly smear colours on anyone — be it your parents, elders, neighbours, strangers, foreigners, friend or foe. Whoever you are, whatever your status or position may be, this act of "colouring" is accepted in a spirit of celebration and friendship. There are no hurt feelings or attempts to defend one's self. In today's world, where human beings and nature are besieged by problems, threats and conflict, celebrations such as Holi bring the much-needed message of equality, unity, unconditional love, happiness, compassion, universal friendship and enthusiasm.

The joyful participation we feel during festivals and celebrations transcends the mind and intellect. It is wholehearted. There is a deep feeling of love in it. We need to put in effort to sustain this spirit in all of our activities throughout our lives.