Gramayanam: Telangana's villages over a period 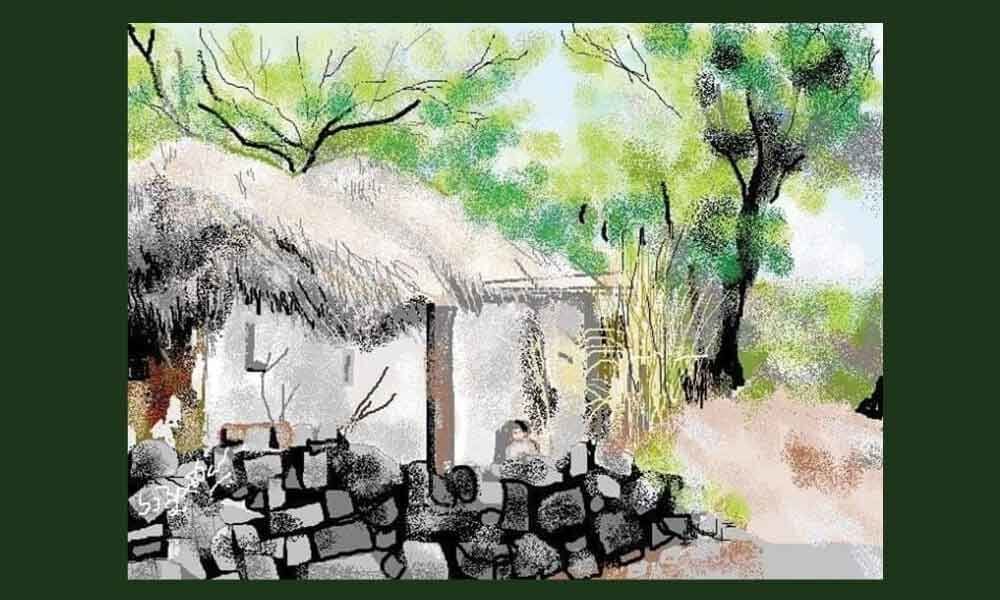 Telangana State government is all set to bring in massive reforms in revenue sector.

Telangana State government is all set to bring in massive reforms in revenue sector.

The announcement of government's intention for reforms in the backdrop and context of large-scale irregularities coming to limelight in the totally corrupted revenue system.

Chief Minister K Chandrashekhar Rao himself responded to a grievance in social media and instructed concerned officers for immediate redressal.

During his campaign in Lok Sabha elections, he frequently made a mention of corruption in Revenue Department.

Later, in the review meetings held after elections, the Chief Minster made a specific reference to revenue corruption and the need to bringing new Acts to put an end to that.

Against this background, it may be worthwhile for the present and future generations to know about the functioning of revenue system at the village level which formed the basis for all levels.

It would be ideal if these are considered while reforms are conceived.

Professor Maramraj passed away on 4th of May. Among others, Rao illustrated in the book, land related issues in Telangana rural areas, village administration, the Patel-Patwari system with reference to land records, the land taxation system, revenue policies etc. The observations and suggestions in the book are worth considering in the context of revenue reforms.

Since ancient days the agriculture based rural society is an extension of land dependent habitation. Every village was like an independent republic in itself.

Villagers among themselves were settling disputes if any in the village. Until 19th century there existed no boundaries between villages and also between agriculture lands.

Till mid-19th century structured administrative machinery in the then Telangana area districts was absent.

The Moghuls and Shershah though got the agriculture lands surveyed, did not create any permanency to land records.

The founder of Asafjahi dynasty and the first Nizam, the Nizam-ul-Mulk and the later Nizams did not pay considerable attention to administration and governance.

This state of affairs continued till first Salarjang became Prime Minister in 1853.

With the sole objective of providing funds required to Nizam, the Jaghirdari, the Payagas, the lordship (Dora) came into existence who concentrated more for their self-benefits.

This was the situation prevailing in Telangana villages until the beginning of 20th century. Until Kakatiya administration, the village accounts and revenue collection were handled by Jains.

During the regime of King Ganapathi Deva, 6,000 Brahmins were trained and were appointed as Village Karanams. Later, they came to be known as Six Thousand Niyogi Brahmins (Aruvela Niyogulu).

They became famous as the ones who were proficient in village accounting in a very short time. That's how the village land related income and expenditure accounts were entrusted to them in due course.

To handle law and order in villages there used to be a Patel or Munasab. Neither the Karanam nor the Patel were given any salary.

They however used to set aside a part of village revenue after paying to the government treasury.

In 1853, the then Nizam appointed Salarjang as his Prime Minister. When he assumed charge, the Nizam government was in a precarious situation.

Salarjang worked with three successive Nizams for 30 years. It was he who initiated the administrative system that was in place in the British ruled areas.

The administrative reforms initiated and implemented by him got a good name to Nizam. The Jillaband policy introduced by Salarjang was followed until recently.

He got the survey done of the agriculture lands in the Nizam State. Proper records were prepared. Prior to survey no one had any clue except the Village Karanam, as to what was the extent of land any farmer was in possession and cultivating.

The word Pattaadar came into usage for the first time after Salarjang survey and settlement and gradually got standardised.

At the village level three officers namely Patwari, Police Patel and Mali Patel were appointed. To assist them the Sheik Sindhi was appointed.

In addition, there were Neeradi and Barabalotdar. None of them were paid salaries. From out of land revenue a certain portion was paid as remuneration annually.

This arrangement was continued until 1956 when the erstwhile Andhra Pradesh State was formed.

The Patwari with his power and goodwill took care to see that the villagers are on his side always. While collecting the land revenue a convention known as "Adukkollu" was in practice.

As there were no salaries paid to village officers, at the time of land revenue collection they used to mobilise from the farmer certain amount per plough (the instrument used to cultivate the land).

This was however not the type of bribery that is in practice these days in revenue. The farmer gratefully paid that amount without grumbling.

On collection of revenue receipt known as "Pavuthi Bahi" was issued to the farmer. The Patwari had a respectful place in the Taluka office.

Every issue pertaining to the village was tackled only in consultation with Patwari. The present-day Village Revenue Officer hardly receives such a respect and the reasons for this are umpteen.

Thanks to Salarjang reforms the lands were surveyed and based on the soil strength of the land, the "Anavari" register was prepared.

The "Naksha" illustrating the sketch of the land was drawn on a silk cloth with Black ink which are still preserved perfect till this day.

Based on this only the land assessment is being done by the government. For every village some area of land was demarcated for Gramakantham.

Similarly, one fourth of the land in the village was left out for cattle grass as "Bancharayi" and unusable land as "Poramboke". Now neither Bancharayi nor Poramboke is seen in any village even for namesake.

In the farmer's land the waste area covered with big stones, ditches and not useful for cultivation was marked as "Phutkharab" and was exempted from land revenue.

Now for the Rythu Bandhu assistance Phutkharab is not taken into consideration and it is also covered for investment subsidy.

In Telangana records were maintained only for farmers' lands but not for government lands.

However, such of those government lands which were fetching revenue were fenced with survey stones and the responsibility to protect was that of government.

After the survey and settlement of Salarjang, the responsibility to protect the records was entrusted by government to village Patwari. They are hereditary village officers.

The Patwari in turn entrusted the responsibility of taking care of records and revenue collection to the Mali Patel. The Police Patel had the powers to review the day-to-day dealings in the village.

He was expected to submit a "Rojunancha" to the nearest police station from time to time. This is a report on births and deaths, diseases, clashes, disputes, toll receipts etc.

Until 1960 the main source of income to the government was land revenue only. There was also the "Karodgari" type of taxation. Now that the land revenue is done away, there may not be any necessity for revenue department as such.

The key responsibility of Patwari was to maintain the records of land ownership and land revenue as well as collection of land revenue.

The records that he prepared was the source to the government for any litigation and dispute. Following Salarjang survey and settlement, all the details of every farmer's land were organised into a permanent register known as "Setwari".

Numbers given for every land holding were known as Survey Numbers. Details of all these survey numbers are available only with Patwari, Tahsildar and Survey Officer.

Based on this, the Patwari used to write every year two registers known as "Pahani and Chouphasla" and obtained the signature of Tahsildar on the last page of the registers. On every page, Tahsildar's stamp was attested.

In these records, details of land extent, categorisation, tiller's name, crops details, inspection details etc were recorded. Based on these details in the "Zamabandi" conducted at the end of the year the amount of land revenue from a particular village was arrived at.

From June 7, when the farming season commences, the agriculture lands were personally inspected by the Patwari and then were recorded in the Pahani.

Like the present Pattaadar Passbook, earlier it was the Pahani paper, that was kept as a fundamental ownership document by the farmer.

For the revenue collection also, the basis was Pahani record. Now, the Pattaadar Passbook is used as a document for receiving investment support subsidy for agriculture as well as for deciding the ownership right.

Girdavar was the overall superintendent for these inspections. Patwari used to maintain another record known as "Barish Takhta" with details of quantity of water in the village tanks from time to time.

With the help of Pahani and Barish Takhta Zamabandi was conducted. With Zamabandi as basis the "Paisal Patti" was prepared. Clarity on the amount of revenue to be collected and actually collected would be arrived.

At the time of Zamabandi, the mutation process in case of death of the pattaadar was completed if it was litigation free. Wherever there was litigation, the legal heirs were decided on hearing the claimants' views.

After Zamabandi, the farmer used to decide on the second crop and the possibilities to go for second crop.

The Panchayat Raj system brought with its new trends in the village political and social lifestyle. Importance and influence of village officers started diminishing.

Thanks to NTR, the hereditary Watandari system was abolished. In their place new official machinery came into operation. Watandari persons were staying in the villages and were always available to all the villagers.

With the abolition of Watandari system several irregularities cropped up in preparation of village records which in a way was the beginning of corruption, irregularities and malpractices in the revenue administration.

Further, in the absence of proper training and orientation to the newly created village revenue system and Village Revenue Officers, there existed an abyss between the VROs and villagers mainly the farmers.

As the Village Revenue Officers were also treated on par with other government employees with facilities like salaries, transfers and promotions, their preference was more on safeguarding their interests than the village and farmer welfare.

The earlier type of relationship between Patwari and Tahsildar is totally missing now between MRO and VRO.

None came forward to reform the village-revenue system which was subjected to several alterations over a period. Chief Minister K Chandrashekar Rao has now initiated the reform.

The reform should encompass the village level VRO to MRO to RDO and beyond. The farmer shall get the confidence that on the land in his possession he has absolute right.

(The author is CPRO to Chief Minister of Telangana)