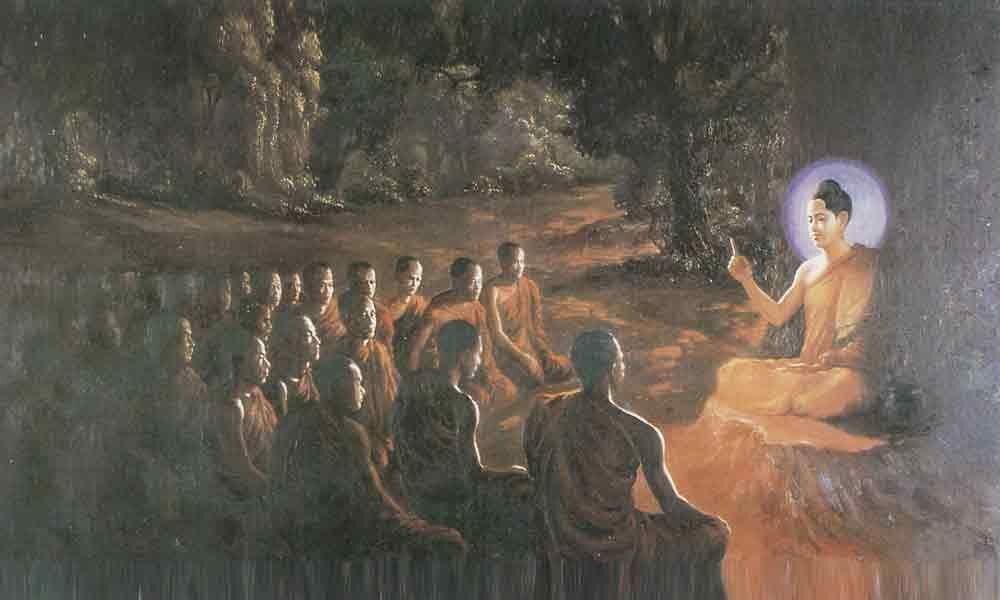 Siddhartha, the founder of Buddhism was born on the full moon day of May 18, in the year 566 B.C. at the Lumbini in Kapilavastu on the Indo-Nepal...

Siddhartha, the founder of Buddhism was born on the full moon day of May 18, in the year 566 B.C. at the Lumbini in Kapilavastu on the Indo-Nepal border.

Suddhodana of Sakhya clan, the father of Siddhartha was the king of a little republic of Kapilavastu. The Queen Maha Maya was the mother. Gautama was his family name.

When Siddhartha was born, his father Suddhodana consulted the court astrologers about the future of his son.

They predicted two possibilities; either Siddhartha would become a Universal Monarch (Emperor) or a Buddha showing a way, for the salvation of mankind as a universal preacher.

Then the king asked the astrologers, "What shall my son see to prod him to renounce the world and his princely life. They replied - 'Four Sights' - an old man, a diseased man, a dead man and a parivrajaka (Ascetic).

These four sights will create revulsion from the luxurious royal life and set him on a quest for truth.

One day Siddhartha managed to sneak out of the walled enclosure of the palace and went round the town to see how the people were getting on.

On his way, Siddhartha saw the said four sights, which were quite new to him. The first three sights convincingly proved to him the inexorable nature of life as well as the universal suffering of humanity.

They moved him deeply. He wondered as to why at all sufferings existed. But, the fourth sight – the hermit – signified to him the means to overcome the ills of life and to attain peace.

These unexpected sights may have been the immediate cause of his resolution to leave his palace. 'Worldly happiness is transitory', Siddhartha felt.

At the age of 29, Gautama suddenly abandoned his home to devote himself entirely to spiritual pursuits. He not only left his home but also his wealth, power, his wife, kith and kin quietly.

Dressed like a mendicant with a begging bowl in his hand, Siddhartha wended his way to Rajgriha, the capital of Magadha. The King Bimbasara invited Siddhartha to his palace and asked him to share the power, but in vain.

He practised severe ascetic practices (Tapas) for six years. Barefooted and bare-headed, he walked in the scorching sun and in the piercing cold in quest of enlightenment.

He sat under a Bodhi tree in Vuruvela (Bodhgaya) Bihar and determined to perish till he knew the truth.

He said, "Skin, sinew and bone may dry up as it will, my flesh and my blood may dry in my body, but without attaining complete enlightenment, I will not leave this seat". That seat is known as Vajrasana!.

Thereupon, Siddhartha had seen the light and attained the enlightenment under the Bodhi tree. (Nirvana) and became the 'Buddha'.

Banaras, the present Varanasi was the heart of religious worship down the decades where most of the religious leaders not only expounded their viewpoints but also proved their supremacy.

Buddha wished to preach the enlightened knowledge he gained. He said, "I shall go to Banaras, where I will light the lamp that will bring life into the world.

I will go to Banaras and beat the drums that will awaken the mankind. Give ear, O mendicants. I will now preach the Dharma".

At the age of 35, he went first to Banaras and began his mission of preaching and spreading the new doctrine.

The Buddha delivered his famous first sermon at Sarnath, near Banaras setting forth four noble truths. The first truth is that life is full of dhukka.

The second, it is caused by a 'constant craving for sensual pleasures, and material things'.

The third is, that 'agony will cease when a person is freed from desire'.

In the fourth noble truth, Buddha prescribes an eight-fold path for the cessation of pain.

2. Right Aspiration or Endeavour: Desires to free from attachment.

8. Right Meditation: To realise a true understanding of imperfection, impermance.

In order to propagate Buddhism, the Buddha constituted Sangha, the nucleus of Buddhist community consisting of "Bhikkus (Pali) or Bhikshus" (Sanskrit).

The members of Sangha deliberated in a democratic way and acted together. The Sangha has been described as a system of the bhikkus, by the 'bhikkus' and for the 'bhikkus'.

It was the individual Bhikshu as a member of the Sangha, who played a pivotal role in carrying the multi-faceted message. The bhikku in his relations with the householder requires constant, day-to-day contacts between the two.

The bhikku has to exhort the householder, restrain him from doing evil deeds, clear his doubts, and constantly direct his attention to the right path, he should follow to attain salvation.

Visits to households and community was a feature of the then propaganda technique.

Many kings were attracted by the new religion Buddhism. As a result Buddha became very close to the then Kings such as the King of Kosala and Bimbisara, the King of Magadha.

They became his life-long friends and strong supporters of Buddhism. In fact, the Buddha in every respect was virtually identical with 'Chakravarthi', the world ruler in his relationship with Kings.

The Buddha's followers gradually increased. Kings, nobles, Brahmins and many wealthy persons became his disciples. He did not pay any attention to caste.

The poor and the outcastes were admitted to his order. Those who wanted to become full members of his order were obliged to become monks and observe strict rules of conduct.

If Buddhism born in India had spread to the entire Asian continent, it is because of propaganda techniques of Buddha: Buddha wandered throughout North-East India for about 45 years.

Among others, his methods of spreading Buddhism include: Buddha's preaching and parables; overnight stay at villages for grassroots communication; use of pali language, the common man language of people instead of Sanskrit, condemned the inequalities of the caste system.

Above all, the Sangha, the basic unit of propaganda with Bhikshus to visit every household regularly for influencing the mind of people towards Buddhism. Buddhism soon became the most widespread religion of India and Asia.

Once a woman Kisa Gotami went to Buddha for medicine to her dead son. The Buddha asked her to get a mustard seed from a house, where there was no death.

People offered the mustard seed, but no house was without any death. The woman realised the truth and buried her son. This was the effective way of Buddha's preaching with experiment.

After the death of Buddha, King Ashoka who not only consolidated Buddhism in India but also had taken to other parts of the World. He is reported to have founded 80,000 monastries.

Paying a glowing tribute to the Buddha, Dr. S. Radhakrishnan writes: "In Gautama the Buddha, we have a mastermind from the East, second to none so far as the influence on the thought and life of the human race is concerned, and sacred to all as the founder of religious tradition whose hold is hardly less wide and deep than any other." Tagore calls him the 'greatest man ever born'.