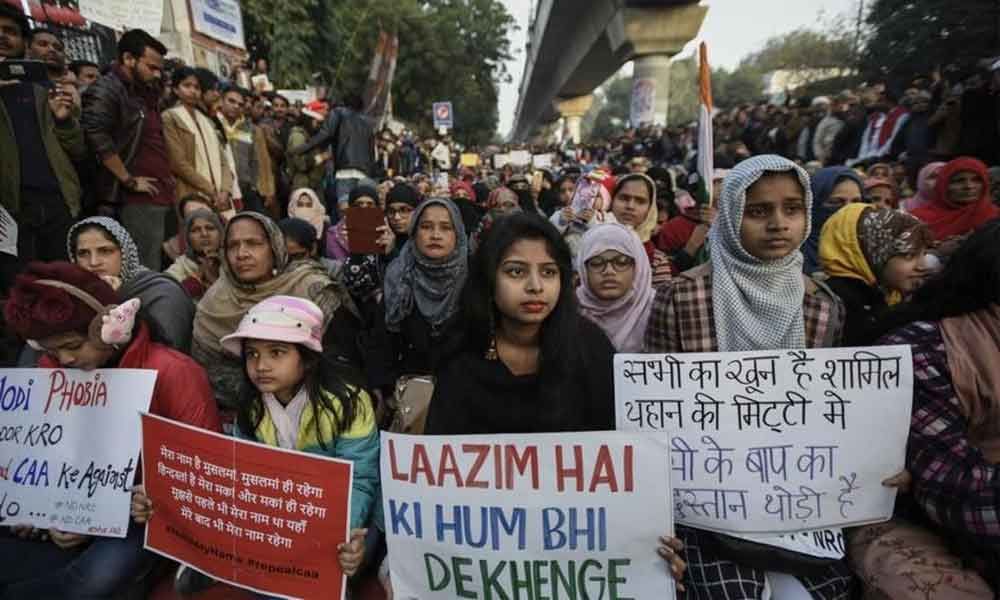 The National Register for Citizens (NRC), that created havoc among the lives of 19 lakh people in Assam

The National Register for Citizens (NRC), that created havoc among the lives of 19 lakh people in Assam, if extended to entire India, what will happen to 130 crore people? How many of them could prove their citizenship? In the 70th year of Indian Republic, the people are burdened to prove that they are citizens of India.

Top constitutional authorities like the Prime Minister and the Home Minister are trying to assure the citizens that they need not doubt their 'citizenship' and only infiltrators will be sent out.

With Citizenship Amendment Act (CAA), the Central government has extended olive branch to immigrants without documents or without proper documents to enter into or remain in India, to secure the citizenship in fast-track mode, provided they are persecuted minorities from Pakistan, Bangladesh and Afghanistan, and that they belong to Hindu, Jain, Sikh, Parsi, Zoroastrian and Christian religions if they entered into India before 31 December 2014 and remained here six years.

By not mentioning the 'Muslims', they are excluded to get citizenship in fast-track. Perhaps the Prime Minster and the Home Minister were right when they said that Muslim migrants too have a chance of getting citizenship under original provisions of the Citizenship Act.

The Amendment called CAA is meant for giving some concessions to 'immigrants' coming from three neighbouring Islamic nations into India, classifying them as religious minorities persecuted in those nations, in securing citizenship in India.

The concession offered is that if they reside six years in India it will be enough to get this right as against 11 years condition prescribed in original Citizenship Act. These concessions are limited to six named religions from three Islamic nations.

The BJP government justified specific exclusion of Muslims on the ground that they are not minorities in their nations and were also not persecuted.

It also claimed that if any of Muslim immigrant desires to have citizenship in India, he can still get it provided he resides for 11 years and fulfil conditions in the original Citizenship Act. However, if they have committed any violation of Indian law or committed any crime under IPC etc, their citizenship request will be rejected.

We need to examine if there is any link between CAA and NRC? As per statements of the Union Home Minister, the National Register for Citizens will be taken up at national level and each infiltrator "ghuspaithiyas" (illegal immigrants) will be thrown out of India "one by one".

This statement was made on the floor of Lok Sabha and supported by video records. However, the Prime Minister assured the nation that NRC was not being discussed right now and CAA had nothing to do with the NRC. The inferences from a possible implementation of CAA with NRC scheme, could be totally different and frightening.

To understand the implication, the experience in Assam where the NRC is implemented and final register is made, with several wrongs and faulty exclusions of lakhs of citizens, who were driven to detention centres, a romantic name given to the jails.

The experience of the NRC in Assam was very painful to both Hindus and Muslims. While 31 crore people were fortunate to be declared as citizens of India, more than 19 lakh people were declared as foreigners. They are fighting their fight in Foreigner's Tribunals.

Most of the persons in Assam are feeling threatened with statelessness – which is very dangerous than having no ration card, Aadhaar card or voter card. He or she is facing challenge to their existence, the basic and natural right of being an Indian. Is he/she an Indian?

Hyderabad MP Asaduddin Owaisi asked: "Why should I stand in queue and tell that I am an Indian? I have been born in this land. I am a citizen (of India).

All 100 crore Indians must stand in a queue (to submit proof of citizenship). This is not just the issue of Muslims but an issue concerning all Indians. I am telling CAA supporters also. You also have to stand in queue and bring documents…"

He also claimed that Assam Minister Himanta Biswa Sarma was hoping that 5.40 lakh Bengali Hindus in Assam will get citizenship through CAA, but five lakh Muslims would be deprived of the same.

Why are we protesting? His apprehension is: "We are protesting because, in the country, in the name of religion, preparation is being made to make us not just second-class citizens but stateless…"

The implications are serious. The CAA might help Hindu 'foreigners' among 19 lakh declared as non-citizens in Assam. But what about other 13 lakh people including five lakh Muslims? If Foreign Tribunals agree with babus that they are not citizens, where should they go? How long they should remain in detention centres?

What evidence will be convincing the clerks, bureaucrats or Babus who take up the process of registering the citizens? It is feared that people, including Muslims, will be excluded due to absence of documents, or deficiencies in documents like spelling mistakes. This happened with many applicants (both Hindu and Muslim) during the NRC process in Assam.

If this problematic, difficult and complex, sometimes almost impossible exercise of registration of citizenship if extended to whole of India, how many millions will become stateless and perhaps should languish in detention centres?

The CAA plus NRC plus provocative statements of the BJP leaders including Home Minister plus experience in Assam put together resulted in mass protests all over the country.

The Centre has tried delinking the CAA from its earlier statements of nationalising the NRC plan.

Prime Minister, Home Minister, Ministers of State for Home gave assurances. Junior Home Minister G Kishan Reddy said the government had not decided when the exercise would begin or what its modalities would be.

"The draft is also not yet prepared. Neither the Cabinet nor the legal department has approved it. The NRC is not going to happen immediately. Some people in the name of NRC are trying to spread fear." Mukthas Abbas Naquvi assured that national NRC is now not contemplated. there "has so far been no discussion on the (NRC) matter at any level of government" as of now and that there is "no plan for a nationwide NRC" yet… NRC is limited to Assam. There is no plan of NRC in any other part of the country.

You are talking about an unborn baby… Spreading rumours about it." He further said: "Who is NRC for? It is for Indian nationals. Does it say it is only about Indian Muslims? No, it does not. NRC, if it at all happens… no government can do it surreptitiously.

That is why the government has clarified, issued advertisements and said that there is no process on that yet, no discussion at any level in the government so far on a nationwide NRC." This is a U turn from the earlier stand of the Union Home Minister who has been declaring in almost all election rallies and interviews that a nationwide NRC is in the works and the government will drive out illegal immigrants.

On December 9, Home Minister Amit Shah told Parliament also that a nationwide NRC was on the cards. He distinguished it from the new citizenship law and said the NRC would have no religious filter.

He agreed that there is religious filter in offering the citizenship to immigrants who have already residing in India. The BJP's national general secretary Ram Madhav says, "It's premature to talk about NRC as the government has not yet made any details about it available".

Today in Assam or West Bengal, a Bengali Hindu can claim to be from Bangladesh. In other parts of India, as per CAA, can any person claim to be immigrant from Bangladesh, Pakistan and Afghanistan? For instance, if a person cannot meet the eligibility criteria for the NRC, once those are finalised, he might lose citizenship.

Another worrying factor is the prospect of detention centres, whether they are existing and going to be established to house those who could not produce necessary documents.