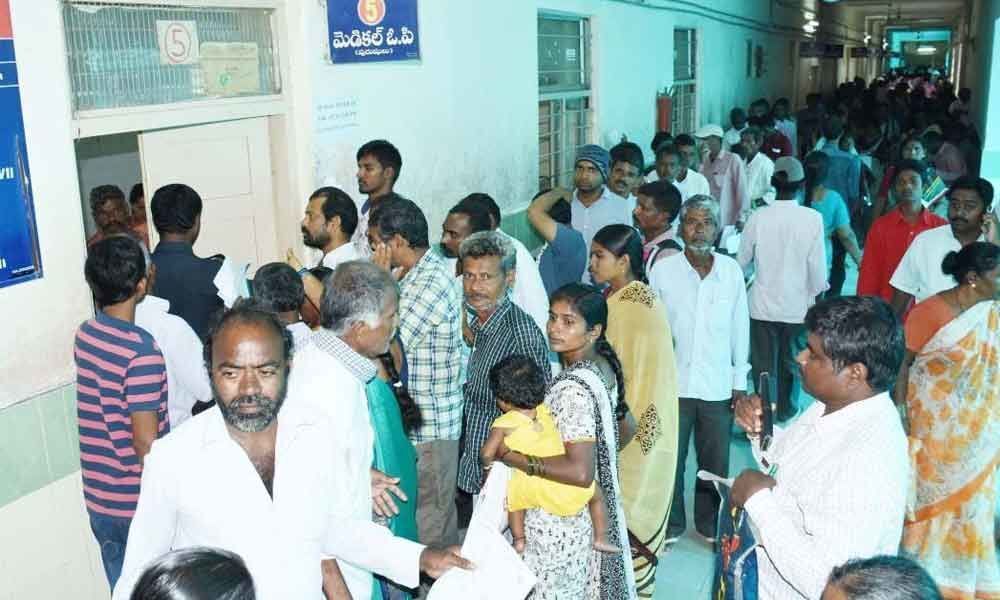 Ever since the Telangana Rashtra Samithi (TRS) government came back to power with a thumping majority, the State of Telangana has been witnessing a slowdown in terms of governance.

Ever since the Telangana Rashtra Samithi (TRS) government came back to power with a thumping majority, the State of Telangana has been witnessing a slowdown in terms of governance.

While the country is witnessing economic recession, Telangana State appears to be witnessing administrative recession. The speed that was shown by the government in its first term in implementing various programmes has not been visible since the elections were over.

The Centre introduced and passed the budget for remaining part of the financial year. It also passed some important and controversial Bills.

In the neighbouring Andhra Pradesh, Y S Jagan Mohan Reddy, though in the driver's seat for the first time, has introduced and passed the budget and good, bad or worse, has been taking some decisions.

But here in Telangana, instead of holding the bull by its horn, the government has been trying to underplay issues like outbreak of dengue and viral fevers and shortage of urea which had led to the death of some farmers as well.

The government has so far not even been able to come out with official figures of people affected by dengue and viral fevers and the number of the dead.

The Health Minister continues to maintain that the figures that were being reported in media and presented by the Opposition needs to be cross checked.

Situation is not as serious as is being projected, the Minister claims. But the ground reality is certainly not as rosy as he claims.

The speed with which it had taken decision to demolish the present Secretariat, shift the offices and departments to various buildings and the speed with which necessary GOs for this purpose were issued has somehow been missing in handling public issues.

The State is also reeling under acute shortage of urea and instead of accepting some failures of the system, somewhere the government is speaking in two voices.

On one hand, it says there is no shortage, but on the other it blames UP and Bihar floods for not getting urea stocks in time.

Though there have been reports for past couple of weeks that the hospitals in the State were getting large number of fever cases, the government chose to turn a blind eye and swung into action very late.

Even the capital city which is supposed to be a global city could not escape from the menace of mosquitoes and sharp increase in the cases of dengue and viral fevers.

No serious effort at the ground level has been taken to prevent mosquito breeding, though rains have been lashing the city for quite some time now.

The officials and even the Health Minister say that there are no serious infectious diseases spreading in Hyderabad and that the fevers are only seasonal.

Seasonal fevers agreed, but what has the government done to control it? That no one is ready to answer clearly. Instead, the Minister for Animal Husbandry, when questioned, reacted saying "It would be better if every care for a child's future is taken even before he is born."

This smacks of arrogancy. In fact, what is being witnessed in the TRS 2.0 rule is that Ministers other than those handling concerned departments are reacting.

One may say that is joint responsibility. Fine, but it does not mean that it is so blatantly displayed as if all others are incompetent.

Notwithstanding the statements of the GHMC, in Hyderabad or municipal corporations in districts, the fact is that no fumigation is taking place anywhere.

When the issue would be raised in the Assembly which will meet here from September 9 for about four days to pass the budget just five months before the financial year is to end, would reel out statistics on fogging and other measures taken to prevent fever and may even accuse the Opposition of being brainless etc … Hyderabad Mayor has already claimed that statistics indicates that this year the cases are less.

But a visit to hospitals presents a pathetic scenario. When will public representatives learn to accept failure?

Instead of taking up extensive fumigation to prevent dengue outbreak, the government advised the people to take preventive measures.

If this request had been made along with necessary measures by the administration, then it would have amounted to taking the bull by its horns.

Another major issue that is now causing concern is the shortage of urea. Here too the government has not been able to tame the bull and is walking holding its tail.

The common man cannot counter the government in terms of statistics, and he is not interested in it either. For him, only two things matter.

While late monsoon had initially dashed the hopes of the farmer, the shortage of urea when it was raining copiously has caused greater worry for him.

Thousands of farmers were seen standing in long queues at PACS but officials were unable to meet the demand. However, this to date neither the Agriculture Minister nor the officials are willing to accept.

Now when some deaths were reported, the State government has blamed the Centre for the situation, saying it failed to provide urea in sufficient quantity.

The reply one gets when questioned is stocks of urea have already been moved to districts and mandals. Fine, but then why are there long queues? If enough stocks are there, distribution could have taken place at a faster pace.

Another argument that is heard in official circles is that urea shortage is possibly the result of farmers changing their choice of crop due to change in rainfall pattern and farmers going in for crops like cotton, maize, soya and paddy.

What does this indicate? The government which spoke of mapping the agricultural pattern and providing timely advise to farmers on which crop in how much area should be sown to avoid problems like shortage of fertilisers that were witnessed in the undivided Andhra Pradesh apparently due to the short-sightedness of the then rulers, also did not take concrete steps.

As a damage control exercise, the Chief Minister finally took stock of the situation, spoke to Perni Nani, Transport Minister in the government of Andhra Pradesh and sought their help in speedy transportation of urea from seaports.

As if this is not enough, a new controversy is going viral on social media that the images of Chief Minister K Chandrashekar Rao, the party symbol of the TRS, official emblem of the government and State animal have been carved on the stones on some pillars of Yadadri temple that is being renovated.

Well, all this means that the next one week, political heat will be witnessed in the State more so as the new Governor designate is going to take charge on Sunday and the first complaint she would be receiving will be on the slowdown of administration and its failure to tackle issues relating to health and agriculture.