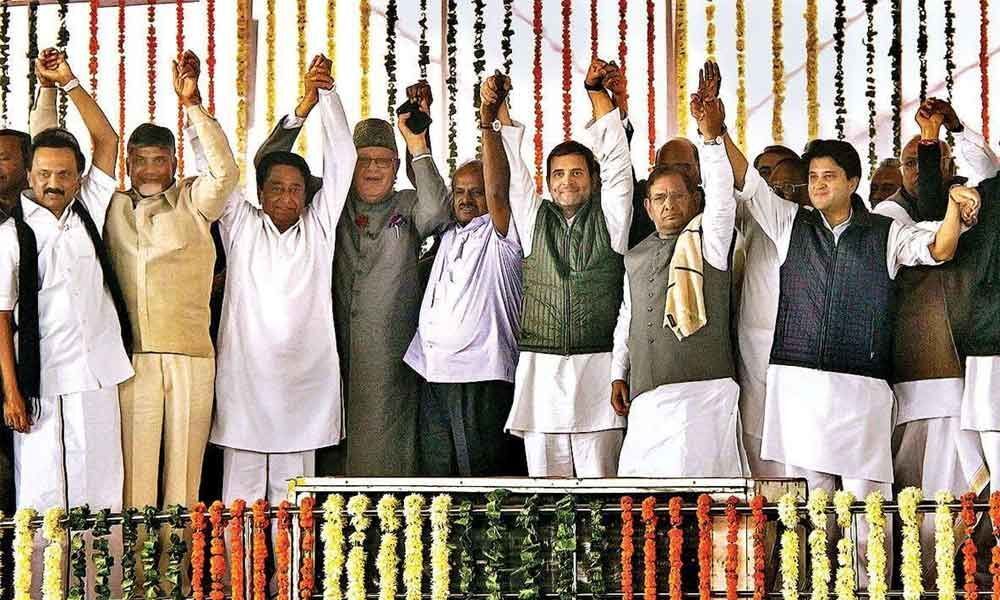 Indian politics is in doldrums, no wonder democracy is ostensibly going to dogs.

Indian politics is in doldrums, no wonder democracy is ostensibly going to dogs. The so-called people's representatives, those who got elected by the people, those who are supposed to form the government of the people, for the people, have been stooping so low that they just go to any extent to grab power, thrusting aside their promises to the public and party ideologies.

Every time there is a defection, much is said about breaching the trust of voters as an anti-democratic practice. Soon, it is followed by allegations of horse trading by the Opposition par-ties and then there is a request for disqualification of defected members.

Whereas the request for merger or alliance of two rival parties is never the cause for agitation. At a time when there are instances of merger or alliances of smaller Opposition parties with an ulterior motive to defeat a big party, there arises a question on comparison of practices of defection, merger or alliances to figure out which is more violative of democratic principles.

Alliance between two main Opposition parties as was witnessed in Telangana Assembly polls in 2018 – where the Congress and the Telugu Desam Party came together and in the recent Lok Sabha elections in Uttar Pradesh where the BSP and the SP aligned with each other - is to be viewed as more undemocratic than the practices of defection and merger.

On the face of it, an alliance is to be looked at as the coming together of two parties of different ideologies. What-ever be the reason, it sends a wrong signal to the voters.

Apart from betrayal of trust, it is like compromising on the core values of the very existence of a party which it has been advocating for years and this can prove to be harmful for the party in the long run. In alliances, it is not just one member who is to be blamed but all the party members who wish to work with their im-mediate Opposition party to take on some other rival.

One of the probable factors that have contributed to the debacle of Opposition parties in Lok Sabha polls was the unsuccessful experiment of opportunistic alliance of some regional parties. These parties at one time were pitted against each other and were bitter critics.

They did not get the numbers as they failed to win the trust of the voters. As the utterances of the BSP su-premo after Lok Sabha debacle proves it, "The BSP and the Samajwadi Party will no longer con-test elections together and the BSP will fight all future elections by itself.

The attitude of SP leadership after the Lok Sabha elections has compelled us to question if they can defeat the BJP in future. It has been decided that in the interest of the party and of the movement, the BSP would contest all elections in future alone."

It can be said that the parties are acting double-faced and resorting to unethical practices. Moreover, even if a government is formed by alliances of parties with different ideologies, then also it will not survive long and eventually the differences and factions are bound to arise and lead to a break-up.

This way, the trust of the voters and their belief in a party they associate with is betrayed. This, in turn, is violative of the principles of democracy. This is evident from the recent fall of the 13-month-old coalition government in Karnataka led by JD (S)-Congress combine.

From Cabinet berths to taking important decisions, everything was chaotic right from the start. In the past also, there have been many instances of such coalition governments falling apart.

The in-fighting among the coalition partners causes unnecessary delay in taking decisions and affects the day-to-day administration. The citizens will have to wait for welfare schemes and developmental activities.

To discourage opportunistic alliances of opposition parties, can a law be formulated on the lines of anti-defection law? This could regulate the parties' actions and prevent them from forming alliances only for sharing power without ideological compatibility.

This seems to be necessary in the interest of democracy and the people. Instead of raising voice against defection or mer-ger, there should be a campaign against 'hooking up' of disparate Opposition parties to form government and to grab power.

However, it is not easy in practical terms as the idea of allianc-es itself will be defeated if we go on to formulate such law. We should also remember that alli-ances are one of the features of the Indian polity.