We are the creators. We depend on it. Now we are sinking. PLASTIC 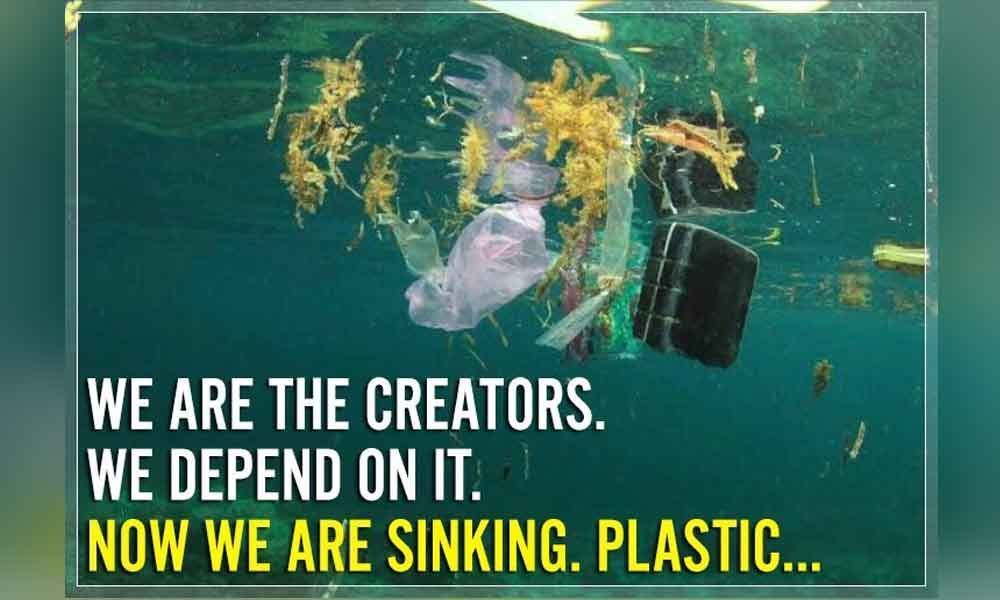 PLASTIC...A Material which made our modern living impossible without this. More than 40% of it is used just once, and it's choking our waterways.

Most of us grew up in an age where the mantra of "plastic is fantastic." Yes Initially it appeared so. In fact it has made our modern living impossible without plastic and except human beings everything else has turned plastic. But the same plastic which appeared to be fantastic is choking our lives and has turned out to be the most dangerous product.

Plastics have potentially harmful effects that could prove to be carcinogenic or promote endocrine disruption. ... Humans can be exposed to these chemicals through the nose, mouth, or skin say medical experts. Breathing near plastic trash being burned, opening a new plastic item that releases a strong odour, applying body lotion, drinking hot coffee from a Styrofoam cup reusing a water bottle, eating food microwaved in a plastic container, or that has been frozen in a plastic container or even food that has simply been stored in a while… any of these common practices allow chemicals from plastic to migrate easily into the body.

As we celebrate The World Environment Day Today On June 5th Let's all Join our Hands together to save ourselves and Planet Earth and Beat the Plastic Pollution. If we don't act now, we would be held guilty by future generations as they would be the worst affected both in terms of health and environment. According to World Health Organisation, India is one of the most plastic polluted countries. It is one among the 14 most polluted cities in the world.

Our country has an ongoing Swachh Bharat Abhiyan, which in principle should have addressed the problem of plastic waste and plastic pollution, but the reality tells another story. It's time we encourage use of paper bags for shopping purposes and pottery made of good clay for cooking purposes. Similarly, it is time we take a pledge to quit plastic bottles which we commonly use for storing and drinking water and instead switch over to either stainless steel or glass material.

The government both central, state and local administration too should take special measures to see check dumping of plastic in oceans. Every year at least 8 million tons of plastic is being dumped in oceans which amounts to emptying a garbage truck of plastic into an ocean every minute.

Moreover, 60-90 % of marine litter is plastic based. The amount of plastic in the World's oceans could increase by the factor of 10 in the next decade. Cigarette butts, plastic bags, fishing gear, and food and beverage containers are the most common forms of plastic pollution found in the oceans.

Its time to say Jago Grahak Jago. Save Earth Save Environment and save your family from plastic.

Some ways in which one can get rid of plastics are:

For drinking purpose switch to stainless steel glasses or copper bottles. One may carry own bottle in order to avoid usage of plastic bottles.

For summers one can store water in matkas and non-plastic bottles which naturally purifies the water.One can reduce the online ordering and takeaways as the food is mostly packed in plastic bags which emits large amounts of toxic in the food.

One should avoid having hot drinks in Styrofoam cups as chemicals leach when the hot drink is poured in it.